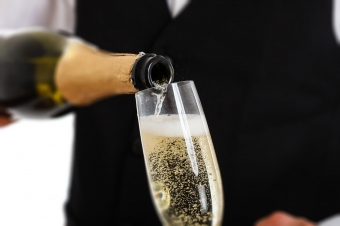 It's the season of celebrations. Here's the proper way to serve Champagne and sparkling wine without spilling a drop or injuring yourself.

You could say I have a bit of a Napoleon complex with Champagne.

I’ve always wanted to know how to sabre a bottle of bubbly like the French emperor did when he was victorious in battle.

Problem is, I don’t have a sabre, and as it turns out, I’m not good with sharp objects anyway. The words “bomb” and “shrapnel” also don’t sit well with me, and both flowed freely from David Hulley’s mouth as he explained the risks of putting blade to bottle of any sparkling wine.

The director of customer service at Vineland Estates Winery, who trained under a master sabreur, has successfully sabred many a flagon. He’s also experienced the nerve-shattering explosions and cuts when the spectacle has gone awry, so he was quick to put my inner Bonaparte in his place.

Instead, Hulley offered a safer technique for opening and serving sparkling wine, requiring no sharp objects or first aid kit within reach. Best part is, unlike Napoleon, you won’t spill a drop, making it a truly revolutionary way of serving that méthode classique.

Two thumbs up gets two thumbs down

Using your thumbs to push out the cork will definitely open a bottle with a bang, but not the good kind, Hulley warns. “Sure, it’s fine if you’re trying to shoot the lights out but if you use two thumbs, you’re going to get a rooster tail,” he said. And the only place those belong are on a bird. Rooster tails of spraying sparkling mean wasted wine on top of broken lights or a dent in the dry wall, so keep those thumbs in check.

Do the prep work

Remove the foil and expose the cage, the wire contraption around the cork that keeps it in place. Pro tip: it only takes six half-turns to remove the cage, so if you want to show-off, do this step with your eyes closed.

“It doesn’t matter where in the world you are, there is a distinct number of half-turns to open the cage. It’s a world standard.”

Once the cage is off, press your thumbs on top of the cork to hold it in place until the next step.

Grab the cork in one hand like a handle. Feel free to use a bar towel to give a better grip. Then, with the other hand on the base of the bottle, begin turning. Don’t turn the cork — only turn the bottle — and whatever you do, resist the temptation to pull it out.

“The natural pressure in sparkling wine will push the cork out,” Hulley explains. “The sparkling will do all the work for you. When the cork comes out, you’ll get a sigh.”

The release of carbon dioxide is followed by a wispy cloud — a dreamy sight, really.

This guy knows what he's doing by putting his thumb in the punt when pouring Champagne and sparkling wine.

Thumb in the punt

Now comes the important job: pouring. Put your thumb in the punt, that deep impression at the base of the bottle. Splay your fingers to support the weight of the bottle, then begin pouring with the label facing up, so it’s visible to guests. Hulley promises you’ll look elegant and cool.

That very first pour of sparkling wine will always foam up. Move on to filling the other flutes, then return to the first glass to “top up the bubbles” and ensure no one gets short-changed, Hulley advises.

“People are always quick to pick up a glass of sparkling. No, no, just wait.”