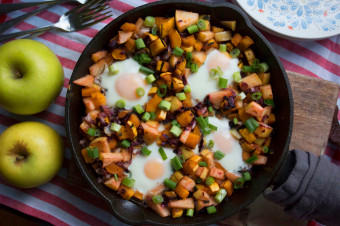 Apple-delicata squash shakshuka is a wintertime spin on this comforting egg and vegetable dish done on the stovetop and in the oven.

This post was sponsored by the Ontario Apple Growers (OAG). What does that mean? I was paid to develop this recipe for apple-delicata squash shakshuka. The recipe and story I’ve told below are my own, without input or editing by OAG.

I tend to follow Micheal Pollan’s rule of never eating where I fuel up my car.

I take that one step further and avoid eating where my husband buys coffee cream late on a Sunday night when he’s in a bind, or anywhere I have to flick the dust of a grocery item. Ditto for places where sandwiches come shrink wrapped and stamped with distant expiry dates.

In other words, I don’t usually eat at my neighbourhood convenience store.

But what happens when you walk into that neighbourhood convenience store to pick up your Niagara Local Food Co-op order and find shelves lined with half-pecks full of the most beautiful Mutsu apples you’ve ever seen?

If you’re me, you look more closely. Then you pick one up and give it a tap, tap, tap, which you learned about from an apple farmer who knows all the secrets to determining how fresh such fruit is.

And when the tap, tap, tap makes the harmonious rapping sound of apples that promise to be crisp and juicy instead of dry and mealy, you ask if they’re local. When the answer is yes, you break that Pollan-esque rule and lay down your money for a basket.

That was easily the best decision I made that day — that week, even. Those Mutsus were big and beautiful. They were crisp and gave way to my bites with a head-turning kind of crunch. They packed sweet juice that hit all the right snappy notes on cue.

Like anyone excited by such a prize find in a most unlikely spot, I tweeted it to the world. When I returned a few days later to replenish my stocks, there was hardly a basket left. I’m not taking credit for that. Truth is, I’m certain I was the last person in the world to find out about these apples, which the store carries regularly during the season.

The Mutsu isn’t among the usual suspects of apples I eat. I’m a creature of habit with my love for Ambrosia, Empire, Ginger Gold and (shh, don’t tell anyone), those more foreign Pink Lady types. (Good news: The Vineland Research and Innovation Centre has a few Pink Lady varieities in its test orchards to see how well they grow here!) But right now, they’re all playing proverbial second fiddle to the Mutsu, an apple with a bit of an identity crisis.

It turns out the Mutsu is the only truly green apple grown in Ontario. It also turns out it was a bit of a tough sell at one time.

The Mutsu is a Japanese hybrid that was introduced to this part of the world after the Second World War. Even a cursory knowledge of how that went down should give away why North Americans weren’t quick to warm up to this new apple, which is related to the Golden Delicious. So it was given a more North American moniker. The Mutsu was rebranded as Crispin and confusion has ensued ever since.

But I say let’s call a Mutsu a Mutsu. It is 2016 after all. Still, that mixed-up name story, in addition to their incredible flavour and freshness, made these apples perfect for what I planned to make with them: a winter shakshuka starring apples and delicata squash.

Shakshuka means mixed up or mixture in some Arabic dialects. Most people associate it with eggs cooked in a rich tomato sauce, warm with cumin and chilli peppers. But I decided to take its meaning quite literally and mix up shakshuka as we might know it.

My garden was a prolific producer of delicata squash this year, and with its sweet, creamy flesh, the delicata seemed like a good foil to my crackling green apples. The bitter bite of radicchio would keep these two in check, and a pinch of red pepper for a hit of heat would be the friendly reminder that winter has nothing on you. Sage, sweet cider and cider vinegar round a flavour profile with sweet, sour, bitter, salty and spicy layers. The soft yolks of eggs baked into it all cover off the richness we crave at this time of year.

So go forth and break the rules. Buy the apples at the convenience store. Mixing things up can lead to incredible things.

Everything about this meal says breakfast, lunch or dinner, and that’s what makes it a winner in my books — I can eat it any time of the day. Shakshuka usually conjures images of eggs floating in a pool of tomatoes. But shakshuka, which means mixed up, is really open to interpretation and lots of play.

The flavour in this one is layered with sweet, sour and bitter bites, and a hot little kick from the crushed red pepper. Even better, it’s fantastic for prep because all you need to do is chop — no peeling required. That’s the beauty of using delicata squash with its thin, tender skin. If you can’t get your hands on delicata, butternut squash will work but you will need to peel it.

Melt butter/oil in a skillet over medium heat.

Add the sage and crushed red pepper and cook for one minute, until aromatic.

Add the squash and a pinch of salt. Cook 10 minutes, stirring occasionally, until squash starts to soften and brown.

Add the radicchio, apple, cider and vinegar. Give everything a good stir to combine, and cook until radicchio starts to wilt, about one minute.

Remove from oven and sprinkle with scallion greens. Divvy up and serve immediately with a sprinkle of fresh ground pepper to taste.

Note: I found the most glorious Mutsus bursting with lots of sweet-tart flavour, which made them the perfect addition to this recipe. If you can’t get your hands on any, Northern Spy or Granny Smith would be fine stand-ins.