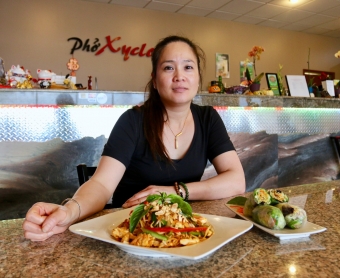 Pho Xyclo is a popular Viet-Thai joint in Niagara Falls serving up all the standards and some creative spins on Southeast Asian fare.

Strip Mall Gems is a series of Eating Niagara, my column that runs in the St. Catharines Standard, Niagara Falls Review and Welland Tribune. This instalment is about Pho Xyclo in Niagara Falls.

You could call Kim Pham picky. After all, it’s how the Niagara Falls restaurateur will describe herself if asked.

But then, you can’t build the city’s best Vietnamese eatery, according to crowd-sourced ratings, by being willy-nilly. Pham, who owns and operates Pho Xyclo (pronounced Feu Zicklow) with friend David Chau, is nothing short of exacting when it comes to turning out bowls of pho, the noodle soup slurped at street food stalls in Vietnamese villages and now beckoning Niagara locals to the restaurant’s home in a Dunn Street strip mall. Ditto for the stir-fried southeast Asian dishes that round out the menu at Pho Xyclo, named after the three-wheeled rickshaws weaving through the clogged streets of Ho Chi Minh City. Rather than order her vegetables from a restaurant supply company and risk them not being up to snuff, Pham heads to the grocery store every day to load up on peppers, cucumbers and lettuce. “That way I know how fresh it is. If it’s in a shipment, I don’t know how long it has been sitting there,” Pham insists.