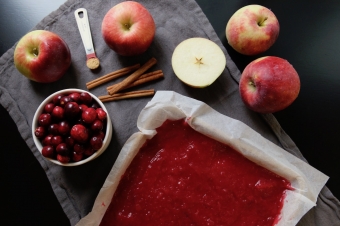 Apples and cranberries are two fall fruit stars. They're the perfect foils for each other in this simple apple-cranberry fruit leather.

This post was sponsored by the Ontario Apple Growers (OAG). What does that mean? I was paid to develop this recipe for apple-cranberry fruit leather. OAG set up and accompanied me on a visit to Art Moyer’s apple orchard but the recipe and story I’ve told below are my own, without input or editing by OAG.

I have a rule that I won’t eat apples until peach season is over.

It’s not a hard and fast one. I knew I'd waver when my mom arrived at my door in early September with a handful of Ginger Golds. And I knew I wouldn’t regret it. Niagara doesn’t grow a lot of apples. We’re small potatoes compared to Georgian Bay, home to the most acres of apple orchards in Ontario. But we’re still mighty. Those Ginger Golds told me so. So did a visit to Art Moyer’s Grimsby apple orchard last week, a swath atop the Niagara Escarpment that his family has farmed since 1947.

The time spent admiring his Golden Delicious crop, their blush cheeks beaming in the spurts of sunlight breaking through thick clouds, affirmed my appreciation for what farmers like Art do. It wasn’t just because of the quirky bits I learned about growing apples, like how a bar of soap hung on young trees keeps seedling-eating deer away. If you think tying soap to a tree sounds tedious or plain odd, imagine being the farmer calling around in search of hundreds of hotel-sized bars of the stuff. No easy feat, Art told me. Hotels are pretty mum on their soap sources.

My appreciation really grew because my visit was on a quintessentially fall day. Rain clouds and the sun duked it out for dominance. A hair-frizzing drizzle let me know who was winning. And a breeze, crisp as Art’s crop, kicked up its heels along the escarpment, making my host’s cherub cheeks only a few shades lighter than the Red Delicious fruit weighing down rows of branches.

Yet there he was, still outside working on a day I’d have rather stayed indoors with my laptop and a cup of tea. Two more of the 14 varieties of apples Art grows were ready to be harvested and the days he had left to do it were ticking off the calendar. All of Art’s fruit needs to be off the trees by Nov. 7 when his last seasonal worker from the Caribbean returns home for the winter. Art seemed unfazed by Mother Nature’s grey and wet curveballs. Instead, he seemed grateful for her erratic behaviour. Take, for example, that his fruit is a good size — some of it was downright big — compared to elsewhere in the province. This despite Niagara coping with record-breaking heat and drought for much of the summer, which shrunk other crops like those peaches. Big is better for getting fruit into grocery stores rather than having to sell it for juice, which isn’t as profitable.

When it did rain, Art was grateful if it brought thunder and lightning with it. Others might worry about crop-ruining hail joining the dynamic duo of stormy weather. Art focused on the positive, seeing thunder and lightning as a fertilizing power couple. “People don’t like thunder and lightning because of the damage it can do,” Art said. “But (when you have thunder and lightning) you get nitrogen. Nitrogen is good for everything.” Still, Art worries he’ll feel the effects of this summer’s drought next year. Buds for the next crop set in July. That was the hottest, driest stretch of the summer, so he's concerned about what 2017 will bring.

Bit and bites about Apples

Art grows 80 acres of apples, which is big for Niagara. Most of that is devoted to Red Delicious, Gala, Mutsu/Crispin and Golden Delicious. Here are a few fun facts I learned about them, and apples in general, from Art, and Kelly Ciceran from Ontario Apple Growers, who joined us at the farm:

Thanks Art. Good luck with the rest of the harvest.

This fruit leather features two stars of fall fruit. Apples and cranberries are the perfect foils, complementing each other perfectly with sweet and tart flavours.

This fruit leather is a great snack to satisfy a sweet tooth while keeping it healthy. Plus it appeals to any kid, big or small, who likes to play with their food. Wrap it around your finger, stretch it, twist it or eat it with all seriousness.

I used Empire apples for this recipe, but any sauce apple like Golden Delicious, Macs, Spartans and Idareds would work as well. If you use Northern Spy, you might need to up your honey content to sweeten to taste.

Put apples, cranberries and water into a saucepan over medium heat.

Bring to a boil, stirring regularly.

Reduce heat, cover and simmer, stirring occasionally to help break down the fruit. Cook until the fruit is the consistency of thick, lumpy apple sauce, about 15 minutes. (Add additional water, one tablespoon at a time, if it evaporates before the fruit is soft and saucy.)

Remove from heat. Add cinnamon and ginger, and puree with a hand blender or in a food processor until smooth.

Line a small square or rectangular baking sheet with parchment paper. Spread the fruit mixture evenly across the parchment, about 3-4 millimeters thick.

Place in a dehydrator or oven (including a toaster oven) at 175°F (75°C) for up to 12 hours. Check it regularly after 8 hours. You know the fruit leather is ready when it's tacky and your fingers come clean when you touch it. It will also be shiny and slightly firm. (See note)

Cut into strips, 1-2 inches wide, and roll them up. Store in an air-tight container on your counter for up to a week or in the freezer for up to six months.

Don't fret if there are some rivulets of moisture on the surface of your fruit leather after 8-12 hours. If the leather peels away easily from the parchment, it's done. Also, this recipe can be easily doubled, just be careful when sweetening with honey. Taste it at 3/4 cup before adding that final 1/4 cup because you may find it's not needed.