Blogging for a cause: Meet Charlene Theodore 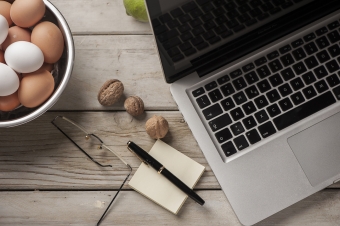 There's more to food blogging than creating recipes. Some bloggers do it better their community, like at Chew Street where blogging for a cause is the norm.

It’s the recipe for success for many food bloggers. And why not? That sounds pretty sweet. But there other places food blogging can take a person. I heard the stories of a few who broke the book deal mould when I was at the International Food Bloggers Conference in Sacramento in July.

The conference (if you’re a food blogger, go!) included a session called From Blog to Business. I didn't read the fine print beforehand, so I figured it would be about turning food websites into big money makers through sponsored posts, advertising and book deals. It was better than that. It was a panel of three Sacramento food bloggers sharing their story of how food writing launched them into spinoffs that bettered their community. Blogging for a Cause would have been a more accurate name for this inspiring session. Rodney Blackwell from Burger Junkies turned his love for all-beef patties topped with cheese into a gold ticket affair called Sacramento Burger Battle. The burger cook-off is all about crowning the best on a bun in Sac.

It also benefits the Crohn’s and Colitis Foundation of America, a cause close to Blackwell whose oldest daughter was diagnosed with Crohn’s. He built such a popular (sustainable!) event, he was able to hand it over to the foundation to run and grow themselves. It’s tough to get tickets, which speaks to the benefits reaped by the foundation thanks to Blackwell's enterprising ways. Blogger Amber Stott founded the Food Literacy Center, which works with elementary schools in high-needs neighbourhoods to teach children the importance of eating the veggies.

The premise is that food literacy improves not only health, but the environment and economy. Eight Sacramento schools have invited Stott and crew to combat the bleak stats that only 25 per cent of Sac kids eat enough fruits and veggies while 40 per cent struggle with obesity. Another 58 per cent use subsidized lunch programs. Stott told us that there’s more demand for her after-school programs than she can handle. Still, she's making a difference one carrot stick at a time.  Catherine Enfield of Munchie Musings, the final blogger on the panel, started a food film festival and a separate dining event dedicated to all things offal to benefit local charities, including the Food Literacy Center. It was a total mood booster to hear about the ways food — and blogging — can lead to social change. It’s not a phenomenon unique to Sacramento, though. We have people using blogging to strengthen and better their community closer to home.

Charlene Theodore is the author of Chew Street, a blog that the lawyer by day has turned into a social enterprise. She hosts small events to raise money for different charities and programs in Toronto, including a pro bono legal service for parents of children accessing care at Sick Kids Hospital, and a local breakfast program.

I caught up with her earlier this summer to find out about her MO and the impact she’s having. Blogging for a cause is new to Theodore, so she preferred to focus instead on the impact (only $1.50 buys a kid breakfast) it can have rather than how much she's raised, and her plans to use sponsored posts and additional events to further her cause. You can hear about the how's and why's of Chew Street on the latest episode of Grub: A Podcast about Food. And you can find that on all the usual listening suspects (iTunes, Google Play, Podbean). Also, be sure to check out Chew Street online for a good read that’s doing social good.