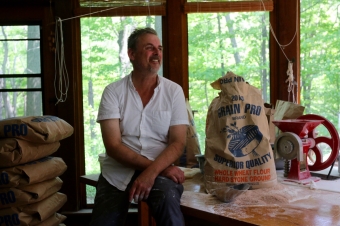 John Graham is a sourdough svengali. When it comes to making bread, the proprietor of Niagara's Park Road Bread rises to the occasion.

I originally wrote this story for The Hamilton Spectator.

I have a loaf of bread baking in my oven as I type.

One thing is certain: it won't be as good anything John Graham bakes.

I call the proprietor of Grimsby's Park Road Bread a sourdough Svengali. The man makes fermented flour work for him in an almost magical way. A way that eludes me.

Maybe it's all the precious language around getting the all-important starter, which is simply flour and water, to … start. Most people call the festering concoction that leavens bread a mother, which is enough to scare the bejeezus out of me.</>I don't want to do wrong by anything named Mother, and yet, I've inadvertently killed many mothers by not feeding them enough flour, feeding them the wrong kind, or worse, forgetting to feed them anything at all.

"Think of it like an army," Graham told me when we met at his home earlier this summer.

I liked it. It certainly made the bacteria, whose job it is to make bread rise and give it that telltale sourdough tang, sound hardy. Indestructible, even.

But in the weeks since our visit, there's been work, a business trip and countless garden harvests that have seen my army unwittingly shoved to the back of the fridge where it's been reduced to a watery grey shadow of its former off-white, doughy self.

Turns out, an army is only as strong as its general, and this one forgot her plan of attack to feed her soldiers weekly.

So now I await a loaf made with yeast from the grocery store, and for the chance to cross paths with another Park Road olive or whole wheat round.

Perfection, Any way you slice it

The insides of Graham's loaves glisten when you slice into them, a nod to the amount of water he uses to cook his whole grain flours — many that he mills himself — and open the crumb when baking.

His bread is moist and chewy, flavourful from the long fermentation of an "army," whose rigorous training includes as many as three feedings a day.

It's perfection any way you slice it. But this is what you'd expect from a man who learned the art of sourdough as though his life depended on it, and by having the patience to read the 26-page basic loaf recipe (38 pages if you include the preamble) by Chad Robertson of San Francisco's famed Tartine Bakery.

"Like a lot of people, I started baking sourdough because this was about a much healthier bread for me," Graham, 54, said from his kitchen table while his smooth fox terrier, Dan, dozed by his feet.

Graham spent much of his career as an urban planner in Toronto, building cities rather than colonies of beneficial bacteria. A thyroid condition and the side effects of heart medication forced him to change his diet and line of work so his body could heal.

Sourdough has long been touted for its health benefits, and Graham wanted to tap into them.

The Health Benefits of Sourdough

The long, slow fermentation of the starter helps break down the wheat flour, making it easier to digest. Fermentation also helps release minerals in the grains, including calcium, magnesium, iron and zinc, which aren't as abundant in mass-produced loaves made with commercial yeasts.

More than that, however, Graham simply loves good bread, so he started "playing" with sourdough in 2008.

"I had always known about sourdough. I travelled and always loved bread. The common element among these breads was that they were naturally leavened. I knew from own tastes that this was the bread I enjoyed eating," he said.

He eventually figured out sourdough was good for something else: making a living. After mulling a business plan with friends and "people who know what they're doing," Graham launched Park Road Bread one cold Thursday afternoon last November. He hauled some loaves and a sign that beckoned "Get Real Bread Here" to a sliver alongside 40 Mile Creek and sold out quickly. He returned with more bread the following week.

"At that spot in Grimsby, traffic slows right down. A lot of people were forced to look at that sign. I don't know if they felt sorry for me," he recalled with a laugh.

Whatever the case, the right people were pulling over: a member of the Mustard Seed Co-op; another from the Merchants of Downtown Grimsby. Soon his bread was appearing — and disappearing — from the Hamilton grocery store's shelves, and Graham was signed up as vendor at the Grimsby Farmers' Market on Thursday nights through the summer.

Since then, he's expanded to other markets and independent stores from Waterdown (he's at the farmers' market there on Saturdays till the end of the season) to Winona. And come October, he'll be at the Jerome Brothers Farm and Market in Ancaster.

"People talk about good bread and there's a lot of room in the world for good bread … so it seemed to me a low-risk thing because people like to eat bread," he said.

What sets Graham's bread apart, however, isn't how fantastic it is. It isn't even how it's made, though plenty of thought and effort goes into it. Turns out, it's where it's made.

"You can pick up a lot of loaves like mine around the world right now. What makes them different is the terroir and the hands of the bakers."

His are flour-dusted, fleshy mitts that spend the earliest hours of the day grinding and mixing grains, then pulling the finished product from blistering hot ovens in the commercial kitchen he built in his basement.

He started with 36 loaves that day in November. Now Graham is turning out 320 a week, sometimes as many as 100 in an eight-hour "bread shift."

"If you're really super-organized, you can bang out a lot of bread. This is not a pretend thing. There's no fun music being played, no wine glasses being clinked. It's work. I listen to the sound of refrigeration compressors but the process is still fascinating," he said.

And the results are enough to break even Robert Atkins' resolve — unlike those that come out of my oven, which, once sliced up, are merely vessels to transport peanut butter from jar to mouth.

As I ponder how to get one of the two loaves I just baked unstuck from the bottom of a Dutch oven, Graham is working on fine-tuning his packaging, adding levain cakes to his repertoire and expanding the market for his shelf-stable rye berry loaf, which is "a revelation" when sliced, caramelized and used in a grilled cheese sandwich.

He's also contemplating a community-supported agriculture bread project, delivering loaves to those who pay upfront for a share, and adding another market to his rounds. But not because he'll be rolling in the dough, however.