This Niagara nut farmer has heart 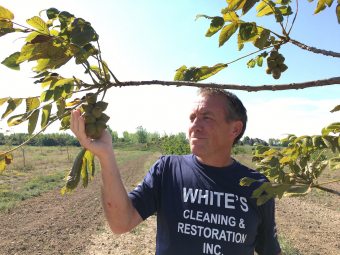 Dave White is a Niagara nut farmer with heart. He grows cashew-like heartnuts, and black walnuts that he sells to the public.

It’s a sight that makes Linda Grimo smile every time she sees it.

There, at the corner of Line 8 and Concession 7 in Niagara-on-the-Lake, is a sign that reads “Walnuts, Heartnuts, Fresh Eggs for Sale,” beckoning passersby to Dave White’s nearby farm. Grimo loves it not only because the trees on White’s sprawling acreage came from her family’s nut nursery on Lakeshore Road but because the man tending to them “sees the value of the crop.” White hasn’t spent his life farming to hone such instincts, however. In fact, he never likened himself a grower of anything despite having it in his blood. His family raised cattle and grew potatoes in Midland but he opted for a career in emergency response cleaning in Niagara. He has, however, always dreamed of living in the country. So three years ago, when a modern bungalow in a bucolic setting went on the market, he and his “city slicker” wife, Tracey, did something his friends told him was plain nutty. They bought their dream house with 180 heartnut and black walnut trees in the backyard. They added chickens on a lark. Sales of eggs and nuts at the farm gate have been brisk ever since.