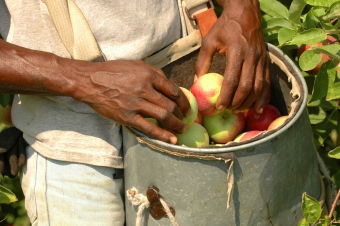 The documentary, Migrant Dreams, shows the vulnerability of foreign workers who come to Canada to work under the Temporary Foreign Workers Program.

Editor's note: I was invited to screen Migrant Dreams by GAT PR. I was not paid for this post, nor did GAT PR have input into this post.

Editor's note: I was invited to screen Migrant Dreams by GAT PR. I was not paid for this post, nor did GAT PR have input into this post.

It’s not often that I’m embarrassed to be Canadian.

In fact, this might be the first time I’m saying it out loud and in such a public way. But it's how I felt after watching the documentary Migrant Dreams, a film by Min Sook Lee, about the plight of migrant workers toiling in our greenhouses — packing cucumbers, harvesting tomatoes — as part of Canada’s Temporary Foreign Workers Program. (The documentary premieres Wednesday, Sept. 14 at 9 p.m. on TVO). They come for the opportunity to do the low-skilled, low-paying work that Canadians apparently don’t want to do. I say apparently because in 2009, I reported on the systematic firing of local workers so that a nearby greenhouse could start importing help using the program. Employers are only allowed to dip into the foreign pool of workers if no local help is available. Foreign help is keen to come here for a few years to earn earn a higher wage than at home and use that money to provide their families with a better standard of living.

Some even hope it will lead to immigration. So why would a greenhouse say they don’t have enough Canadians labour and go through the process of hiring workers from abroad? I have a cynical short answer to that question after watching Migrant Dreams, which tells the story of a handful of workers at a Leamington vegetable greenhouse. Instead, here’s a synopsis of some of the troubling issues raised in the award-winning Migrant Dreams, which was among the Top 10 films at the recent Hot Docs Canada International Film Festival.

The story of these workers is one of extortion. They pay a significant portion of each of the greenhouse pay cheques to a “recruiter” to cover their flights and fees to come to Canada. These are actually fees the employer must pay and not seek reimbursement from workers. Many of these workers, earning minimum wage, were forced to pay $7,000 or more, which made their income less than minimum wage once that math is done. They are prisoners to their debt. The workers in the film are put up in housing infested with vermin, or windowless garages, with more than a dozen others. They have no privacy and in some cases, lack proper washroom facilities. In one case, workers say their employer parks his gardening equipment in their “housing” after their contracts are over.

Workers who seek livable shelter elsewhere still have rent deducted from their pay cheques for this sub-standard housing even after they move out. It’s a racket. But it doesn’t stop there. The film showed workers’ lodgings ransacked because they refused to turn over their passports to their employers — again something workers are not legally required to do. There are language barriers. The workers in Migrant Dreams are Indonesian and their English isn’t good. They aren’t well-versed in Canadian law, let alone able to read any rules and regulations in a language other than their own. That leaves them even more vulnerable to the whims and word of their employer, who, in this documentary, only has one concern: making money not advocating for human welfare.

Those who question what’s happening to them risk being sent home without notice, their opportunity to provide for their family going with them. Fortunately, the workers in Migrant Dreams did speak up. They questioned the recruiter extorting their money. They filed police reports and are now waiting to testify in criminal trials against these people.

Inside a greenhouse growing peppers.

Others await settlements to a civil suit after their employer kept them working illegally until two weeks after their visas expired. For those two weeks, the employer promised visas would be renewed and then dismissed them when they weren’t. They either had to return to Indonesia and apply (and pay) to return to Canada, or stay in Canada and fight it, unable to earn income in the meantime.

Fortunately, the workers in the film will be getting a settlement from the greenhouse, which is an acknowledgement of wrong-doing, no matter how the legal eagles try to frame it. The local activist helping these workers says at the end of the movie that Canada has become a nation of migrants rather than immigrants. She is forever seeking the good stories about the Temporary Foreign Workers Program but has yet to find them. I was frustrated watched the difficulties the workers had on the job, the loneliness they felt in a community where they are marginalized, how much they miss their families, the sadness in their voices talking about their situations.

I felt angry at this image of Canada that we — and others — love to portray. That utopia where everyone is accepted, treated well and a better quality of life awaits you. Where our Prime Minister does yoga and photobombs beach weddings, shirtless and in a form-fitting wetsuit. I’ve heard this glossing over of the real issues we face as a country referred to as maple-washing. Meanwhile in Leamington... It needs to stop. Why do we worry whether our bananas and coffee are fair trade when the tomatoes and cucumbers grown down the 401 in Leamington wouldn’t qualify for such status?

Fortunately, there are efforts afoot to automate the industry, which I hope means such stories will become history, albeit a dark one.

Min Sook Lee had harsher words for the program, which is different from the Seasonal Agriculture Workers Program. That program what brings in the 2,600 workers from Mexico and the Caribbean tending to Niagara’s orchards and vineyards for up to eight months a year. That’s not to say it’s without issues, but that story I wrote in 2009 made me realize the Temporary Foreign Workers Program is a different beast, and a beast it is. Here is what Min Sook Lee told me about what she saw when making the film: “Migrant Dreams tells part of the story of migrant workers in Canada.

It doesn’t tell the whole story, pretending to is hubris.  The film concentrates on the experiences of a group of workers who face restrictions on their labour and human rights in Canada because they are non-citizen workers. "The problems the workers encounter are systemic, they are not the result of ‘one bad apple’.  The government program legislates inequality and creates a class of workers who are modern day indentured servants. Workers are tied to employers during their term of employment with little labour or social mobility. There is a disproportionate power imbalance between worker and boss.  Access to health care, banking, social services and shopping is routinely controlled by the boss. "Many migrant workers in Canada arrive heavily indebted to private recruiters that are contracted by bosses to enlist workers and supervise them while in the country.

A portion of their weekly salary then goes to the recruiter to pay back the ‘debt’ incurred to secure a job in Canada.  Workers are trapped with few systemic means of advocating for their rights. "As the writer/filmmaker Trinh T. Minh Ha noted, there is a ‘Third World in every First World’. Migrant workers inhabit Canada’s third world that is conveniently ‘unseen’ by Canadians. But the relationship is intimate. They pick our fruit, wash our floors and wipe our babies’ noses. Migrant workers subsidize the lifestyles of Canadian households. And the relationship is historical as much as it is contemporary. "This is the same balance of power that lines the boots of Canada’s colonial footprint. Migrant workers come from the global south, they are racialized, many are Indigenous, and they are poor.

The workers come from regions that have been underdeveloped by global capital and dominated by foreign ownership of resources, factories and land.  Canadian mining companies in Central and South America, Canadian manufacturers in South East Asia and Canadian banks in the Caribbean, control resources and own the means of production to flow profits back to Canada.  This political and economic context sets the preconditions for the movement of non-citizens to work as migrants in Canada. "That the film exists is a testament to the courage of workers. Speaking out means job loss.  Deportation. Migrant workers are continually told they are disposable and replaceable.  If one worker rejects the gruel Canada offers them, there is a line up of hundreds waiting behind to take their place. "They have seen workers injured on the job and sent back home without proper medical treatment, workers berated and penalized for not working fast enough, workers fired for speaking out about unsafe working conditions. Despite this climate of total control, workers resist because they understand justice. The workers who appear in this film trusted me, they trusted the activists who vetted me and they trust you.

They believe in the power of film to inform, engage and mobilize. "If you watch this documentary, you can no longer say ‘I didn’t’ know’.  And so the next move is yours.” If I may suggest, that next move could be watching Migrant Dreams when it premieres Wednesday at 9 p.m. on TVO. Watch a preview now