Posted Sep 8th, 2016 in Recipes, Summer Recipes, In The Kitchen 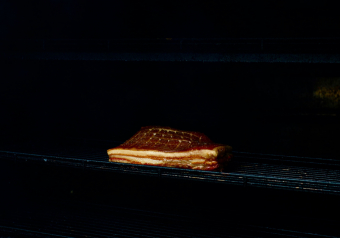 The smell of smoked food awakens something primal in all of us. Here's an easy tutorial on how to smoke meat and vegetables at home.

Kudos to Homo erectus for some huge accomplishments during his time on Earth a million-plus years ago. Walking upright was certainly impressive. But how about that ability to control and cook with fire? To this day, food and flames remain soul mates, their smoky smell triggering hunger in nearly every biped. Omnivore or vegetarian, it's tough to deny the appeal of smoked food. Good thing we can get our fix at home with the right tools and techniques. We caught up with Chef Nathan Young  from In the Smoke Cookery and Catering to teach us the dos and don'ts of smoking food at home. Spoiler alert: it's easy and you won't need to give up the farm for a fix of pulled pork or smoked vegetables.

Chef Nathan Young of In the Smoke Cookery

Step 1: Get the gear

Young recommends using an electric Bradley Smoker. Picture a beer fridge with a tiny chimney and temperature controls on the outside. Not only do these smokers not take up much space, they're simple to use. Set the temperature and timer, fill the smoker with your food and wood of choice, and walk away. A Bradley Original Smoker starts at about $450 and is available at most outdoors stores.

Fruit wood, such as apple, cherry or peach, are Young's favourites to use, and Niagara's orchards are filled with plenty of it. Find a farmer who's culling old trees and ask about buying or taking some wood. Your taste buds will thank you because fruit wood lends a mild smoky flavour to food, unlike hickory, which can sometimes be overpowering. Some backyard smokers, including the Bradley, may require dedicated wood briquettes or chips, but fruit wood options are plentiful.

Step 3: The meat of the matter

Virtually any meat can be smoked. Proteins, such as pork belly, are ideal for cooking and preserving over fire. Best part is, pork belly is inexpensive at just over $2 per pound. To prepare for smoking, dry and score the skin in a one-inch cross-hatch pattern. This will help get the best crackling.

Rub all sides with oil and season with kosher or sea salt (avoid salts with additives such as iodine). Salt draws out moisture and is critical in the preservation of smoked food. Smoke at 325°F or 160°C until meat reaches an internal temperature of 165°F or 73°C. To turn that pork belly into bacon, put a five-pound piece in a high-sided tray, and make a brine with 100 grams each of salt, brown sugar and maple syrup. Cover the belly in brine and set a heavy plate on top to keep it submerged. Young recommends letting it brine for five to seven days before smoking.

Step 4: No vegetarian left behind

For the veg fans, Young prefers smoking denser root vegetables, such as carrots, parsnip, and sweet potato, which take on incredible flavour. But other vegetables, including tomatoes and asparagus, can also be smoked. The key is to cut them to roughly the same size and note that smoking times vary.

To smoke root vegetables, put a good glug of oil in the bottom of a pan to coat it, and pre-heat it. Toss veggies, cut to roughly one-inch pieces, with oil, season with salt and pepper and add herbs such as thyme, rosemary or sage before placing them in the pre-heated pan. They'll only need an hour in a smoker set to 325°F. They can also be made ahead of time and easily reheated. For those wanting to bone up on curing and smoking other foods, Young recommends reading the book The Art of Charcuterie by John Kowalski and The Culinary Institute of America. If doing this yourself still seems like smoke and mirrors, visit Young for a smoked food fix when he takes over the kitchen at Creekside Estate Winery this summer. He fires up the smokers on Victoria Day weekend and keeps those fires burning until Thanksgiving.