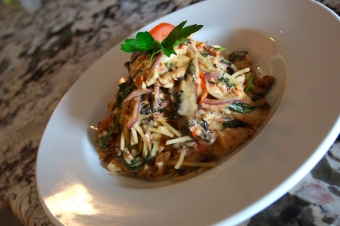 Don Marco's Italian Eatery in Welland's east end is a strip mall gem. The eggplant parmesan is a standout at the family-owned restaurant.

It’s wise to listen to your lawyer.

Wiser, still, if he happens to be a friend with impeccable taste in food. I couldn’t help but think I was being led astray, though, when Ross Macfarlane, lawyer, friend and bon vivant, suggested I meet him for lunch at Don Marco’s Italian Eatery in Welland. And I wasn’t sure whether to blame him or my GPS while driving through a residential neighbourhood in Welland’s east end, past a high school, an elementary school, and brown-brick bungalow after brown-brick bungalow. Where the heck was I going? That’s when Don Marco’s appeared, seemingly out of nowhere, in a small plaza, neighbouring a convenience store at Wellington and Lincoln streets. If the eggplant Parmesan was as good as Ross promised, I had arrived at the epitome of a strip mall gem: that place you’d never know existed until driving past en route to somewhere else, then making note to stop in someday.