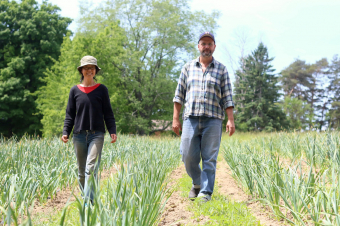 Samsara Fields is an organic farm in Waterford, Ontario. Owners Soyoung Lee and J.P. Gural were drawn to farming as a way to better the world.

As she walks along the edges of sweeping rows of organic garlic at Samsara Fields, Soyoung Lee makes a beeline for a patch of wild catmint.

She reaches for it, breaking off a bunch, but not for the reason you might expect of a farmer. Lee, who grows heirloom vegetables with partner J.P. Gural on this rolling swath in Waterford, Ontario, sees the value in this prolific squatter known for making cats loopy.

Weeds provide great benefit, she says, as she breathes in the plant’s pungent smell. They’re medicinal, therapeutic, and often edible, so she leaves the catmint in the ground and doesn’t bat an eye at its overgrown, uninvited neighbours. It’s not the typical response of someone whose job description usually includes doing battle with weeds for the sake of their crops—their livelihood. But Lee and Gural aren’t your typical farmers. Sure, they grow food for a living but this is about more than trying to earn a paycheque from the 44 acres they cultivate. “We’re doing this as activism,” Lee says. Like many small organic farmers, they’re railing against the usual suspects: conventional, large-scale agriculture, unsustainable cheap food, urban sprawl, and the political and bureaucratic red tape that comes with any kind of farming. Their reasons for working the land to make the world a better, healthier place also go deeper than that, and have much to do with why that catmint was spared.

Getting Back to Basics

In short, “It’s getting back to basics. We’re part of an entire natural ecosystem,” Gural explains. He elaborates that farming shouldn’t be simply taking what we want and eliminating what we think causes us inconvenience.

Still, getting back to basics wasn’t easy for these two. It took some personal hard times and seeing the best and worst of humanity in the process. It was as an early-20-something sitting in her doctor’s office in Seoul, South Korea that Lee, now 41, started on her journey to organic farming. She had been diagnosed with ovarian cancer, notorious for being difficult to detect and even harder to overcome. Her doctor had given up on her, telling her there was nothing further he could do to help. Her mother, who had imparted her knowledge of beneficial weeds to Lee, had other plans for her girl. At her insistence, Lee underwent chemotherapy and began rebounding. That her body harboured such illness at such a young age caused Lee to do some serious soul-searching. Why her, she wondered. She started questioning the foods she ate and their effects on her immune system. She became more philosophical. Money and success held little meaning for the young woman, who studied business during her undergraduate years. She started meditating and practicing Zen Buddhism, and she eventually carried on with her studies in art administration. “I thought maybe I needed to do something beneficial,” Lee recalls.

A world away in Waterford, the Gural family farm lay in waiting. It had been in the family since 1949, worked by Gural’s grandmother and eventually passed along to her grandson, whose parents had left for the city long before. Every year, Gural hired someone to disc the field and grow rye, known for restoring soil. In 2003, he made his way to Seoul to study Korean landscaping and teach English. It was there, in a Buddhist temple, that he met Lee. Though the two connected, Lee was determined to get her master’s degree in art administration, and was accepted to school in Melbourne, Australia. Gural joined her, pursuing his master’s in photography. While there, they held various jobs, including writing for a student magazine. Their stint in journalism taught them about grassroots activism, and after their studies were done, they spent a year travelling to sixteen different countries to see for themselves the effects of globalization—the environmental degradation, the human trafficking, the sweatshop labour used to feed the West’s insatiable appetite for cheap goods—and to help where they could. They travelled to Ukraine, Japan, Thailand, Burma, Laos, India, Jordan, and Turkey. They worked at an arts school in East Timor and played soccer with refugees in Aleppo, Syria, before civil war razed that city and ruined it as a safe haven. They attended workshops dedicated to empowering women in South Asia, offered their services to NGOs, taught English, and simply listened to people’s stories. “We tried to lend ourselves in a positive way to either learn about what was going on or to lend ourselves and our skills,” Gural says. “Whatever needed to be done, we just did it.”

The Call to Farming

All roads, however, led back to Waterford, where Gural’s farm had gone to weeds. The couple determined that farming was the way to combat the negative things they’d seen in their travels and—for Lee—what she had experienced as a young woman so many years ago in that doctor’s office. “We didn’t have equipment but we had our hands and sweat and we tore our way through [the weeds],” Gural recalls. They started growing “heritage vegetables with stories” and getting back to those proverbial basics. “Being basic means you should know where your food comes from, how it’s made, how it integrates with nature,” Lee explains. “Consumerism, commodification makes it tough to get back to basics but the best way to get back is to ask even a simple question of where breakfast came from. How can we take responsibility? What can we do?” For them, the answer was obvious. They named the Gural farm Samsara Fields for the Sanskrit term that refers to the permanent cycle of life and death. “If you see your life in cycles, you see yourself as part of the continuity,” Gural says. “This is all about cycles of life. What you take out, you have to put back again to take back out.” In keeping with that philosophy, they brought the land up to organic standards. And the couple took on the extra expense and laborious paperwork to become certified so they could put skeptical market-goers’ minds at ease that they were doing what they said they were.

Soyoung Lee holds the catmint she picked at her farm, Samsara Fields. “We’re benefitting the soil itself,” Gural explains. “We’re allowing the bacteria to do their thing to make this land really rich. We’re letting milkweed grow, which is attracting pollinators. When we do go to farmers’ markets, we have clients that stay with us and like what we do. So we’re taking part in the whole culture of humanity.” To combat food waste, they built a commercial kitchen to make preserves and fermented vegetables, such as kimchi, with misshapen and imperfect produce that consumers tend to pass by. In the process, though, they continued the education that started on that world trip more than seven years ago. This time, they got a crash course in land-use policy.

The Changing Landscape of Farming

Their Waterford farm is bookended by housing developments. The couple wanted to buy the farm next door to expand Samsara Fields but their offer couldn’t compete with a developer’s. Instead, they added to the farm with land in nearby Boston, where they grow vegetable crops that need more room to flourish. “I come [back] to Canada and see all this agricultural land has vanished. There’s this false sense of security. If you’re not versed in agriculture, you could think the Greenbelt will prevent urban sprawl,” Gural laments. Instead, it’s caused development to leapfrog into places like Waterford and surrounding areas of Norfolk County, he adds. And it will leapfrog around Samsara Fields, which Gural and Lee plan to turn into a peaceful pawpaw orchard once suburbia takes root next door. All that education, however, has made the couple ideal teachers. During every visit to the Toronto markets where they sell their harvests, they help people to understand why organic, small-scale food production is important and something worth paying for. “It’s all about communication,” Lee says. “People learn that with my dirty hands, I grew their tomato…. It’s the environmental, spiritual voice of who we are and how we make a sustainable living. We want to communicate with everyone that this is a sustainable way of life.” The biggest affirmation of their efforts came when the wife of a cancer patient regularly visited their booth one season to buy food she hoped would help her husband heal. It was a personal and poignant experience for Lee. “That never left me,” she says. “We’ve found ourselves in a very nurturing way. There’s amazing impact of what we can do.”