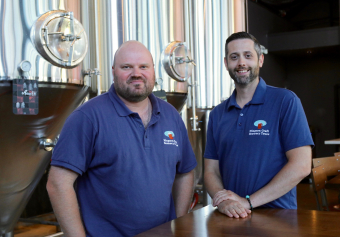 Niagara Craft Brewery Tours is a local company that shows off the region's offerings of ales and lagers with small, private tours.

Steve Kostecki and Jakob Chapman want to show off Niagara in a heady way.

They plan to do it with a business idea that’s been fermenting but became reality this past spring when they launched Niagara Craft Brewery Tours, the region’s first — and currently, only — tour operator dedicated solely to showcasing wine country’s suds. With Niagara home to nearly a dozen craft breweries and counting, Kostecki and Chapman decided to hop to it and offer visitors to our fair wine region something more than organized tipple tours to get a taste of our terroir. “Niagara is a hotbed for beer right now,” Kostecki said. “We have, in my opinion, some of the best craft beer in the province.”

Niagara started paving an ale trail in 2010 when Niagara College opened its teaching brewery and accompanying store that sold student-made brews. Granted, there were already brewpubs in the region, including the Merchant Ale House in St. Catharines and Taps Brewing in Niagara Falls. But the launch of the college program inspired others to tap into the possibility of a beer scene in a region developing a world-class reputation for wine.