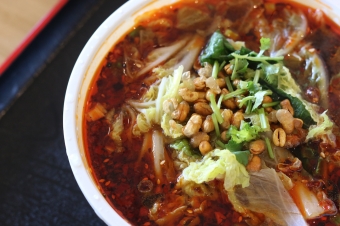 Richard Lin is deliberate in his choice of words when I ask for a cup of tea.

“Would you like some Chinese-Chinese tea?” he offers me, his eyes widening in anticipation of my answer. His repetition of Chinese makes it clear that the black and red blend of steeped leaves we’re about to drink isn’t watered down by Canadian influence. It’s the real thing — tea that’s authentically Chinese, like everything else on the menu at Spiice Chinese Express in St. Catharines’ south end. That means if you’re looking for hot and sour noodle soup made with traditional potato glass noodles, fermented vegetables, black “Chinese-Chinese” vinegar for kick and enough chili oil to coat your tongue and make your brow glisten, you’re in the right spot. Ditto for wonton soup with dumplings bursting with shrimp and pork, punchy Ma Po Tofu, rich braised eggplant, cumin-spiced chicken kidney or Szechuan pork lung in chili sauce.