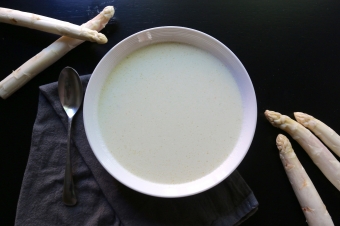 This simple white asparagus soup has few ingredients, is easy to make and is bound to become a springtime favourite. It can easily be made vegan.

This post and recipe for white asparagus soup first appeared on this blog in 2012. It has been updated where necessary.

Bleary-eyed and running on fumes, my husband and I landed on my aunt Sigrun's doorstep in Germany almost a year ago to the day, only she wasn't there.

But her husband, Eckard was and he had a pot of my aunt's Spargelcremesuppe (cream of white asparagus soup) ready for us. What he wasn't ready for, however, was our appetite for what may just have been the best soup we'd ever tasted, especially after travelling thousands of miles and 14 hours. It was rich and smooth, creamy and bright. It took everything in me not to pick up the bowl set before me and pour its contents down my gullet. I struggled to pace myself instead and savour every spoonful. "Mehr?" Eckard asked us, somewhat reluctantly, in Ger-glish, the pidgin we speak to each other.

Of course we wanted more. The ladlefuls weren't as generous this time. I could tell he was trying to ration the magical concoction and, in hindsight, I can't blame him. It was delicious and I would have wanted to keep it all for myself, too. But he was trying hard to save some for my aunt, who made the mix of white asparagus -- albino versions of the green guys -- cream and lemon juice, and didn't have a chance to eat any before dashing off to the hospital to see my Oma before visiting hours ended. So the struggle to pace myself and will myself full continued.

For the next two weeks, our holiday was punctuated by meals of Spargel, the super-fun German word for asparagus. Soup. Steamed and blanketed with Hollandaise sauce. Served with morels. When my aunt was preparing them, I watched as she worked, making mental notes on what to do with these intriguing subjects and offering to help so I could learn hands-on.

Peeling them is key, she told me, because their skins can be tough and stringy. With her eagle eye, Sigrun noticed every hair-thin strand of asparagus skin I missed and watched as I did second and third drafts of peeling. Fitting, really, for what sounds like the diva of vegetable crops. White asparagus are deliberately shielded from the sun, preventing photosynthesis and the production of chlorophyll, which would otherwise give them that familiar green hue. Instead, as they grow, they're daily progress is buried, protecting the shoots from the sun's rays to produce mild, tender, almost sweet spears. Despite the more delicate flavour than their green versions, there's no mistaking they're asparagus come those post-meal bathroom breaks. And while white asparagus are ubiquitous in Germany in spring, they're a bit of rarity here — at least those that aren't imported from Peru are. When I bid adieu to Deutschland after my two-week sojourn last year, I knew I'd long for Spargel just as much as I missed my family.

Fortunately for me, asparagus makes a good replacement crop for tobacco, so plenty of it is grown in nearby Norfolk County, including my precious white asparagus. Just north of Turkey Point, Peter Janssen and his family grow Spargel and sell it in 11-pound boxes for $70. Since mid-April, I've been hounding the Janssens to keep me posted about the start of harvest and this past Sunday, it was finally time for me to be reunited with those lovelies that had become such a fast favourite a year earlier.

I split my haul with family and set about planning my own mini-Spargelfest, starring the steamed incarnation with glorious, silky Hollandaise, and soup made from memory of my aunt's edition. I won't lie. I have no idea if it tasted anything like Sigrun's white asparagus soup but I do know I had the same reaction when I swallowed that first spoonful. It was pure bliss. Comfort and rejuvenation. And a meal the evoked another battle of will as I wavered between scarfing it down and savouring every slurp. Without a large German man protecting the pot, you can probably guess which one won out.

I adore white asparagus for their flavour, which is unlike the green. It's sweet, a touch bitter, meaty, even, and missing that vegetal taste that distinguishes its chlorophyll-filled cousin. This soup is ridiculously simple. It's silky and comforting, and truly a delicacy.

If you can't get your hands on white asparagus, this recipe lends itself well to green asparagus, too.

Heat oil in heavy pot over medium heat. Add the onion and cook until translucent (about 2-3 minutes).

Add chopped asparagus and broth and bring to a boil. Reduce heat and simmer, covered, for 20-25 minutes or until asparagus pieces are tender. Remove from heat and puree with a hand-blender or in small batches in a regular blender.

Strain soup through a sieve or colander with small holes to remove any bits of skin the peeler missed or pulpy bits. You may have to stir it continuously to help it along and make sure you're not leaving behind any good stuff. The leftover mass looks a little like mashed potatoes.

Put back in pot, add cream and butter, stirring until butter is melted. Stir in lemon juice and salt to taste.