Linc Farm at Southbrook owners not sheepish about farm 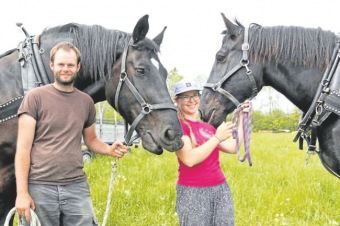 The owners of Linc Farm at Southbrook aren't sheepish about how much they love their animals and are trying to change their industry for the better.

It could have gone either way for Juliet Orazietti.

The daughter of well-travelled Niagara tipple maker Ann Sperling could have inherited “the wine gene or the horse gene.” As it turns out, the young farmer got the latter with a serious sheep and pig mutation. Orazietti, 27, and her husband Martin Weber, 28, run The Linc Farm at Southbrook, a sheep and pig operation that raises animals using organic methods, and they want to show the world what, exactly, that means. The couple have opened up their bucolic workplace, home to more than 200 sheep and a small drove of Berkshire and Duroc pigs, to tours that give a glimpse into the life of happy and socialized farm animals who live in a way that does right by the planet. “We’re trying to show that we’re doing what we say we’re doing,” Orazietti said. “And we like showing off our animals.”

Orazietti and Weber took the reins last year at the mixed farm tucked behind Southbrook Winery on Niagara Stone Road. Until then, they were busy completing masters degrees — Orazietti in animal breeding and genetics, and Weber, who grew up on a dairy farm in Austria, in livestock science — at the University of Natural Resources and Life Sciences in Vienna, where they met. Still, it was no stretch for Orazietti, who frequently travelled as a child to the world’s most storied wine regions, to become a sheep and pig farmer instead. She had been helping her mom tend to the Southbrook flock since 2008, working on the farm in the summer and returning during Christmas break to help with breeding. The animals play a critical role in the production of Southbrook’s vintages.