Taking a day trip to Hamilton 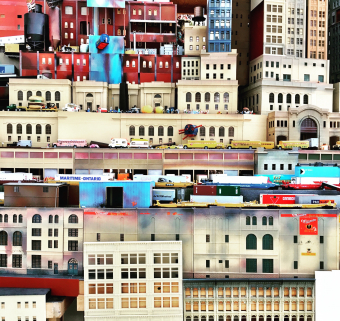 Looking for a quick getaway? A day trip to Hamilton is in order. It's close and has lots to offer anyone looking to recharge their batteries.

If I were the one calling the forecast, there’d be lots of fog in it.

That’s how I’ve felt all week — foggy — after using up all creative credit on Sunday night when I mapped out my to-do list and schedule for conquering it. Fog started rolling in on Monday morning after dropping my car at the mechanic’s and learning a simple repair job was anything but.

I drive a 16-year-old Toyota Echo with 350,000 clicks on it. My boiler suit-wearing friend warning me of all that ails the Echo needs to be approached with a measured response. I have to weigh how many new car payments his big bill would cover. Then there was the time eaten up as I moved from coffee shop to coffee shop to work and not seem like too much of a loiterer while I waited for my sickly wheels to be brought back to health. Productivity wasn’t where I’d hoped it would be by day’s end, what with all the self-conscious moving from one seat to another. The to-do list needed some revising and the week had only begun.

Haziness continued Tuesday. I felt exhausted and the words that needed to be written flowed from my fingertips like molasses in January. Wednesday held such promise until mid-morning when I got a splitting headache and felt like throwing up. Enter one big dark cloud. Through it all, the to-do list loomed large, probably because it wasn’t getting any smaller.

Last night, after pulling the plug on a meeting I had in the books, I looked at my husband and said ‘I think I need a vacation.’ It’s been more than eight months and my last getaway included a writer’s workshop. I’m not sure how much professional development counts as time off, even if it does happen thousands of miles from home, in one of Canada’s most beautiful places (yes, Kelowna, you know who I’m talking about). So I’m now thumbing through my daytimer, looking at candidate days to mark with a big, fattest-Sharpie-requiring X, and call it a mental health day. I’m thought-writing my out-of-office reply on email and contemplating the glorious way I will spend a day off. I’m going to do it in Hamilton. I've been longing to get back to this industrial centre that's going through an incredible renaissance right now.

Restaurants, the arts, shopping, it's no longer the meat-and-potatoes Steeltown as many of us knew. It's a creative, resilient city reinventing itself, and it's tough not to feel energized in its presence. Here’s my plan for day trip to Hamilton:

A class checks out Kim Adams' Bruegel-Bosch Bus at the Art Gallery of Hamilton.

A morning at the Art Gallery of Hamilton

I know everyone goes gaga for the AGO. I’ve seen eyes light up at mention of the Albright-Knox. But here’s some really excellent news: You don’t have to drive into the big city or cross the border to see a world-class collection of art. I was in awe of the Hamilton gallery after touring it for work in March (I was doing research for travel story as a guest of Tourism Hamilton).

The space, the exhibitions, the incredible permanent collection with Colville’s Horse and Train and Kim Adams’ Bruegel-Bosch Bus, plus about 10,000 other pieces — it’s so ridiculously impressive that I don’t understand why more people buying memberships Best part: admission to the permanent collection is free at the oldest art gallery in southwestern Ontario (and the third-largest public gallery in the province). I predict that brain fog to lift quite quickly in the presence of such creative genius.

The Green Bowl from Pokeh at the Hamilton Farmers Market.

Lunch at the Hamilton Farmers Market

You’ll find me in line for a big bowl of poke at Pokeh, believed to be Canada’s first poke bar, inside the Hamilton Farmers Market. Again, this deconstructed sushi is something else I haven’t really stopped thinking about since my work visit in March. Fresh, flavourful, fun (insert other super-positive f-word here) — it’s also the brain food that I need to get back on track. The lineups are long for this Hawaiian fare but it’s worth the wait. Your bowl is a blank slate to design and fill how you please, so you can forgo the Ahi tuna if you’re concerned about the mercury your formerly finned food is packing. Get the pickled shiitake or tofu instead. Don’t forget the cucumber noodles, jicama and wasabi peas for crunch.

Hump Day is in the running for being the day I hammer it to Steeltown. That’s because Whithern Historic House & Garden opens the garden gates on Wednesdays in July and August so we can enjoy what’s in our brown bags or takeout containers, along with some music and a glass of iced tea or lemonade for $1. It’s only a few steps from Pokeh Bar, so I may get lunch to go and grab a sunny spot at this refuge smack in the middle of downtown Hamilton. If you’re not in a rush, a tour is entirely worth taking the time to do. Ask for Tom. His respect and admiration for the McQuesten family, who lived here until the 1960s, is endearing, and makes for a genuinely engrossing tour.

Consider this suggestion mandatory if inspiration is in short supply like it has been for me this week. The mark this enterprising family has left on Hamilton, Ontario and Canada is astounding. (I bet some sort of major infrastructure that you used on your commute this morning is thanks to Thomas McQuesten). And if it weren’t for him, I’d have to take the long way to get to Hamilton to enjoy my day off.

After all, there wouldn’t be a QEW were it not for McQuesten gettin’ it done as the provincial minister of highways creating make-work projects to bolster the economy during the Great Depression.

Yigi and Patrick, owners of Ark and Anchor Espresso Bar.

Coffee break at Ark and Anchor

After lazing about in the Whitehern garden, there’s a good chance I’ll need some caffeine. A few blocks north and west on King Street is the Ark and Anchor Espresso Bar. Granted, I’m on Team Tea but the easygoing vibe created by owners Patrick and Yigi mean that I won’t be judged for denying the bean for some leaf. I may bring one of those copies of Saveur that I’ve fallen behind on to peruse while I sip. If this were a work day, it would be the perfect place to open my laptop. Instead, it will be collecting dust at home.

Communing with nature in the afternoon

Fingers crossed for there won’t be any real clouds in the forecast when I make my break. I’d like to while away the rest of my afternoon outside. The Royal Botanical Gardens are an option. The very zen-like Rock Garden with its West Coast-meets-Japan vibe offers lots of eye candy and head-clearing fresh air. (Thanks again Thomas McQuesten for another brilliant Depression-era project).

The RBG also boasts 27 kilometres of trails if I feel like I need to get some endorphins rushing by going for a longer stroll instead. Barring that, a visit to Dundurn Castle will be in the cards. I’m curious to see how the garden, planted with heirloom vegetables and fruit trees, is progressing after my late winter visit. The harvests are used in the Dundurn kitchen, which has one of the most stunning collections of copper and cast iron I’ve ever seen. And what doesn’t get cooked or preserved makes its way to the local food bank.

Last year, the national historic site donated more than 1,600 pounds of food. Culinary history buffs will want to go on a Saturday instead of mid-week to catch a weekend garden tour or take part in the Cast Iron Chef series, which demonstrates Victorian cooking in the Dundurn kitchen.

Tacos from The Mule Taco Bar.

When the Mexican vendor at the St. Catharines Farmers Market confirms your suspicions that the offerings of his homeland’s food in Niagara leave something to be desired, you heed his words. But there is a great place to fill up on Mexican, Niagara. It’s called #HamOnt.

The Mule Taco Bar makes incredible vegetarian tacos. Their sweet potato version has popped up plenty of times in my daydreams since my visit a few months ago. I’d love to sink my teeth into another one. Mezcal TNT, another Mexican joint that keeps Twitter abuzz with rave reviews, is also on my list of places to try.

I’m sure that after playing hooky, I’ll need to take a load off, and Mezcal’s Pineapple Express sounds like the fastest way to kicking back and calling it a day. Looking for more ideas of what to do during a day trip to Hamilton?

Here are more restaurants to add your list from a story I wrote for The Culture Trip.