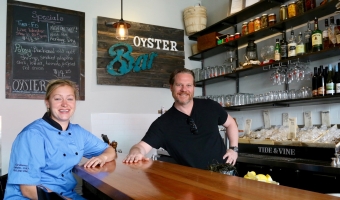 Tide and Vine Oyster House in Niagara Falls is a strip mall gem serving plates of oysters, po' boy sandwiches, and other seafood.

It’s the kind of foreshadowing you wouldn’t expect of a youth spent eating pizza and hanging out at the local strip mall.

But regularly sinking his teeth into a slice of Volcano pizza at the corner of Portage and O’Neill in Niagara Falls came full circle for Mike Langley when he and wife Kat Steeves opened Niagara’s first oyster house in his former haunt nearly two years ago. Ever since, Tide and Vine has become a favourite meeting place for bivalve-loving locals and tourists — and at the very least, an indication of a future swoon-worthy meal if not a career — with every shell shucked. That’s exactly how the couple envisioned it when they opened in 2014.