Posted May 4th, 2016 in Recipes, Summer Recipes, In The Kitchen 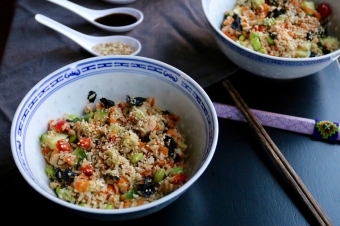 A copy of Nourish: Whole Food Recipes featuring Seeds, Nuts & Beans was provided to me by Whitecap Books for review.

When cauliflower hit $7.99 a head in the winter, I knew it was time to change tactics at the grocery store.

Every week, I watched my food bill swell and, if he was with me, my husband's eyes as he watched the tally grow while the cashier rang in everything. Gone needed to be the days when I made up the week's menu as I cruised the aisles. Trips to the grocery store meant serious strategizing if I was going to thwart big pains in the budget. So I turned to my cookbooks for help, choosing a handful to cook from each week, and making my shopping list accordingly.

I'd pile the chosen editions on my counter for quick reference over the next seven days, then curate a new selection and menu when it was time to return to the dreaded black hole of money known as the supermarket. One book has remained in heavy rotation over the last few weeks. Nourish: Whole Food Recipes featuring Seeds, Nuts & Beans by Nettie Cronish and Cara Rosenbloom won me over almost immediately  when it landed on my doorstep last month. For starters, the recipes are mostly vegetarian — laaaaaaaa!

It didn't hurt that they also contained ingredients that are pantry staples in my house, making my shopping lists even shorter. Lentils? I'm never short. Chickpeas? Got 'em. Millet? Right here next to rice, sesame seeds, steel-cut oats and my nut stash. If an easy way to man's heart is through is stomach, the easy way to this woman's is through a cookbook that feels like it was written for her. This book is an ode to many of my favourite foods: beans, nuts and seeds.

Better still that it's authored by food heavyweights like Cronish and Rosenbloom. Cornish is a storied Canadian vegetarian chef who's penned many cookbooks espousing a plant-based diet. Rosenbloom is a registered dietician who's mugged with TV talk show hosts and written extensively to get across the importance of whole food, healthy diets. Together, they're an A-Team. They deliver recipes of simple, nutritious ingredients. Their how-to's are easy to follow and often get dinner on the table in well under an hour. That's truly convenience food.

Better still, every one of the six recipes that I've tried so far, including the refried bean tacos with broccoli slaw, the easiest chana masala ever, and the fajita quesadillas,  turned out exactly as described. And they were a hit with my husband, who asked for the tacos and quesadillas to make regular appearances at the dinner table. The flavours they channel aren't overly complex — the most exotic meal I made was one bowl sushi (recipe below) starring mirin, nori, wasabi and pickled ginger — and there were times I found myself adding extra salt to amp things up. That's rare for me. Still, this book encapsulates the simplicity with which we eat most days, so it was easy to find meal inspiration with plenty more bookmarked for the weeks ahead. There are also recipes that piqued my curiosity because of their combination of ingredients, most notably the salty-sweet kombu chips loaded with seeds, nuts, rice cereal and hepped up with maple and rice syrups. I've only ever used kombu in miso soup.

Much like Emily Richards' Per La Famiglia, this book was written with every home cook in mind. The goal of both books is to get people of all skill sets in the kitchen and to see cooking as joy rather than a chore. I credit Richards' background as a home economist, and in this case, Rosenbloom's as a dietician. Her job is convincing people not only of the merits of a healthy diet but how easy it is to prepare and eat food that's good for us. She delivers that in Nourish and in the tone of a good and helpful friend rather than that of a preacher. That's not to gloss over Cronish's contribution and the credit she's due. The longtime vegetarian, whose diet would have been fringe at one time, is a pro at convincing people that dinner can be satisfying and flavourful when we leave the meat off our plates.

A bite of One Bowl Sushi

Keeping that in mind, there are descriptions of all the usual suspects in my fridge and cupboard — I'm looking at you tofu, tempeh, oats, beans, and whole grain flours. While those explanations are elementary to me, they're a critical selling feature for those new to this way of eating. Cronish and Rosenbloom demystify bean curd for tofu virgins. They reveal the ease of cooking with legumes for those who have been loathe to try lentils, and they make spelt seem less scary to the enriched wheat flour camp.

They also show how versatile each ingredient is; how they lend themselves well to sweet or savoury; breakfast, lunch and dinner. Peppered throughout are useful tips on cooking and storing ingredients to get the least waste and most mileage out of them; the nutrients they provide us; and how to source the best, most healthful versions. And how to do it all without cringing at the grocery store checkout. Want to see what others had to say about Nourish?

Check out the following links and enter below to win a copy for yourself. Kelly from Kelly Neil Photography Tiffany from Eating Niagara Regina from Leelalicious Redawna from Nutmeg Disrupted Gwen from Devour and Conquer Hilary from Cocoa Bean, the Vegetable Erin from How to Eat Jo-Anna from A Pretty Life in the Suburbs Stephanie from Kitchen Frolic Caroline from Do it All Working Mom Libby from Libby Roach Katrina from Kitchen Trials Laureen from Art and the Kitchen Emily from Best of this Life Lauren from Lauren Follett Nutrition Zannat from Food for Happiness Sarah from Kiwi and Bean Charmian from The Messy Baker Heather from The Tasty Gardener.

This is me outing myself as a pescatarian. I still call myself a vegetarian because that's the intention with which I eat, but when I was pregnant, the cravings for fish were strong, despite all the flax and hemp seed oil I was taking for omega-3s. I've continued eating fish through the nursing process but this veg and grain-heavy meal appealed because it seems less about the fish and more about a healthy, flavourful meal that incidentally contains salmon. The fish could be easily omitted, too.

Rinse brown rice in a fine-mesh colander under cool water and drain. Bring water to a boil in a medium-sized pot over high heat. Stir in rinsed rice. Cover, reduce heat and simmer for 45-50 minutes or until rice is tender. Alternatively, you can use a rice cooker or steamer. Transfer cooked rice to a large bowl.

In a small bowl, combine vinegar, mirin, ginger, wasabi and tamarin. Whisk well to combine. Pour over cooked rise and toss to coat.

Sprinkle with sesame seeds and serve in bowls.