It's time for some Grub, y'all 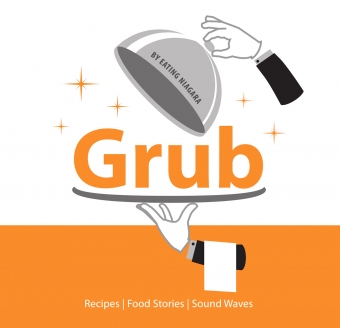 My blog has always been a creative outlet for me.

And as much as I love to write, I really did enjoy all those broadcast courses I took in journalism school all those years ago. So I decided that 15 years after graduating, I'd put them to use, and launch a podcast. It's called Grub and of course it's about food — the people feeding us, their stories, the issues involved in keeping us all fed. And unlike this blog, I'm not limiting it to Niagara, though of course my home region will get plenty of virtual airwaves in the making of episodes. Speaking of which, it will be a monthly to-do, each episode clocking about 30 minutes.

My hope is to have multiple segments per episode, including interviews, soundscapes, talk tapes and all that other jargon that only a rusty j-school grad would use in a post promoting her new podcast. Think of it as short documentaries in just about every format possible. My favourite part of radio and TV production has always been the editing, so I look forward to the creativity of putting together compelling audio stories and, I hope, providing listeners with some good ear candy. That said, I broke that mould in the first episode. It's one segment: an interview with former vegan chef Kyle Paton and how the movement with which he once aligned himself ended up alienating him. His is a compelling story so give it a listen. And while I can't pay contributors just yet, I do take story ideas. If you're willing to be interviewed or have an idea, drop me a line at eatingniagara@gmail.com and put Grub in the subject line.

In the meantime, put some love in your grub and have a listen. And keep a watch for it on iTunes. I'm waiting on the fine folks at Apple to give it the green light for availability there. For now, you can catch it on SoundCloud.