Strip Mall Gems: You Deserve It Café and Creamery 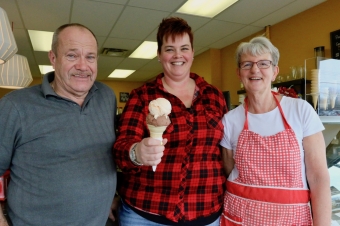 You Deserve It Café and Creamery is a family-run eatery in Fort Erie that serves homemade ice cream and sandwiches. It is a strip mall gem.

Strip Mall Gems is a series of Eating Niagara, my column that runs in the St. Catharines Standard, Niagara Falls Review and Welland Tribune. This instalment is about You Deserve It Café and Creamery in Fort Erie.

Some people scream for ice cream.

Others, like Connie and Arend Meiling, come out of retirement for it. The Meilings own and operate You Deserve It Café and Creamery in Fort Erie, a year-old ice-cream shop sharing a Garrison Road plaza with a pizza parlour, Chinese restaurant and convenience store. It wasn’t their plan to spend their golden years making and scooping the likes of chocolate and vanilla into waffle cones. But they also weren’t expecting cabin fever to set in after calling it quits on running a resort in Haliburton and retiring to Niagara to be closer to their daughter, Paula. “We took retirement for a year and little bit and we got really bored,” Connie recalled.

The couple, who smile easily and love working with people, drew blanks about what to do with themselves in their new hometown, however. When they saw an ad for ice-cream equipment for sale in Niagara-on-the-Lake, they decided it was time to leave retirement in the cold.

Turns out, the equipment and adjoining space up for grabs weren’t the what the Meilings had in mind, but that didn’t stop them from churning out other ideas. “We thought why not (do this) in Fort Erie,” Paula said. Paula, who studied culinary arts at Georgian College and worked in kitchens around the world, also had a stint at Cold Stone Creamery under her chef’s hat. So she convinced her parents to let her try making ice cream in a shop of their own. She went to “gelato school” in Toronto to get the scoop on turning milk fat into everyone’s favourite frozen treat. The plan was to serve “super premium” homemade ice cream with nothing short of 17 per cent milk fat — nearly twice the minimum requirement to be worthy of the title “ice cream.”