The lunch you need to make yourself: Smashed Chickpea, Harissa and Spinach Toasts 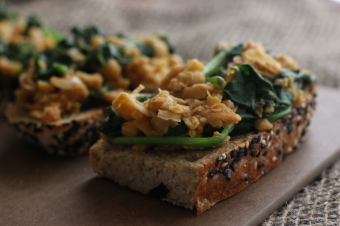 Smashed chickpea, harissa and spinach toasts are an incredibly satisfying snack or lunch with a healthy and flavourful kick.

One of the most valuable lessons I learned from a cookbook has nothing to do with cookery.

It was in Tara O’Brady’s gorgeous tome, Seven Spoons, where, woven into a recipe for a hamburger, I found the nugget about how Tara makes a point of making herself a good lunch each day. The burger in question could be made quickly, which made it a perfect candidate for lunch, but it was far from the afterthought to which we often relegate our midday nosh.

It resonated with me, office worker at the time, who scoured the fridge every morning for leftovers. If my search turned up nothing, it was rushed cafeteria fare at high noon.

The irony of putting so little care into that meal hit me when I read Tara’s words. I can skip breakfast. I can even give a pass to supper, or get by with a bowl of cereal. But lunch? Never. Ever. If I don’t eat that second meal of the day, I go Mach 4 into big old wall, so why was I putting in so little effort?

One of the things I most looked forward to when I gave up the cubicle to work from home was being able make those lunches Tara espoused. It might be quick, but it would take effort, and feel like more of an occasion than perfunctory act because of it. And in the months since becoming my own boss, that meal made to suit whatever hankering I had come noon-ish has become my daily serving of self-care.

Smashed chickpeas with Billy’s African hot sauce and wilted spinach on toast are that RDI of being good to oneself. The simplicity belies the treat it truly is. When I sat down to eat these smashed chickpea, harissa and spinach toasts, it was like giving myself a high five.

The chickpeas were warm, not just from their time on the burner, but thanks to that hot sauce made locally by Niagara Presents, a small-batch, social enterprise preserve maker in Beamsville. It’s a harissa-style paste, created by Bilkis (Billy) Al-haddad, a St. Catharines nurse whose hot sauce is a testament to overcoming devastating loss. Three of her four children died in a house fire in 2002 when Billy was at work.

She created the Qamer Foundation, a youth charity, in their memory, and started making and selling her hot sauce to raise money for it.

Eventually she partnered with Niagara Presents, fine-tuning the recipe, and making and selling her sauce under their label. It’s food with a compelling story, but that’s how it is with every jar of Niagara Presents preserves purchased. Each one has a story or supports an endeavour that betters the lives of women in Niagara.

Billy’s hot sauce has become my go-to condiment. I really do put that stuff on everything. Smashed chickpeas and spinach are no exception, and both are made beguiling by the zippy addition.

Best of all, in 15 minutes flat, I sunk my teeth into a lunch that kept me going until supper, made with pantry and fridge staples.

Further affirmation of the wisdom of those words I read in Seven Spoons. Thanks again for that, Tara. And Billy.

And now, that recipe for spinach, harissa and spinach toasts.

The simplicity of this belies how much of a treat these spicy chickpeas on toast are to eat. It's perfect for a weekday lunch at home when you need to step away from the laptop, or on a weekend when you're on the go, and need something easy and healthy. This recipe was inspired by a chickpea stew recipe from Gordon Ramsay's Healthy Recipes.

Drain and rinse chickpeas and place in a large bowl. Give them a rough mash with a potato masher or fork and set aside.

Heat oil in a large skillet over low heat. Add garlic and cook until softened and just starting to turn golden, about two to three minutes.

Add chickpeas and Billy's African Hot Sauce. Stir until well-combined and chickpeas are warmed through, about three minutes. Season with salt to taste.

Add spinach and combine well. Cook until wilted, about one to two minutes minute, and turn off heat, leaving skillet on the burner to keep warm while you make the toast.

Brush bread with extra olive oil and toast in a toaster oven, or fry in a skillet over medium heat. Toast to desired crustiness and top with chickpeas and spinach. Serve immediately.by Tiffany Mayer

If using pre-washed spinach, give it a rinse before tossing it into the pan. That bit of moisture will help it wilt beautifully and will keep the mashed chickpea mixture moist.

Something for your nightstand

Speaking of influential women in the world of food, Jennifer Cockrall-King has a new book out and its one I relate to as an author and adore as a fan-girl.

I first met Jennifer last year at the Okanagan Food & Wine Writers Workshop, the annual professional development shindig she organizes that focuses on the craft of food storytelling. I learned and re-learned so much at last year’s conference, and I’ve become a big admirer of Jennifer’s work in the process.

Her storytelling is honest and evocative, thanks to her journalistic approach to her work, and there are never shades of purple prose.

Over bowls of slurpy noodles at a Niagara Falls Vietnamese eatery last fall, we discovered our books are kindred spirits. She was finishing up Food Artisans of the Okanagan: Your Guide to the Best Local Fare, which tells the stories of culinarians in B.C.’s interior — a book written in similar vein to Niagara Food.

It’s a celebration and ode to the people behind the food of a region I refer to as Niagara West (they probably call us Okanagan East). I plan to do a full review soon, but I want to spread the word about the work of this wonderful writer.

Go grab a copy. It’s writing that comes from passion and an intimate knowledge of the subject, so the best kind, really.

And check out Jennifer’s workshop if you’re one who puts pen to paper (or fingers to keyboard). It was one of the most inspiring events I’ve attended as a writer.

It's easy being clean

Turns out, I can chill. This guide to washing fruits and vegetables tells me so.

Viliam Zvalo, a scientist at the Vineland Research and Innovation Centre, checks on his eggplant that he's testing for the World Crops program.

That guide also assured my I was doing right by the Chinese eggplant I recently sampled from the Vineland Research and Innovation Centre’s World Crops program. You can get the scoop in my column. But rest assured, not only was that eggplant clean, it was the most user-friendly version I’ve ever eaten. No salting before cooking to get rid of the bitterness - just chop and cook. I think those Vineland folks are on to something.

I made some lime mousse on the weekend, a dessert inspired by my Ellovi key lime and copaiba body butter. Weird, I know. But I suppose I could have just eaten the body butter. It’s made with six ingredients you might have in your pantry right now, and it’s glorious stuff.

I am an obsessive ingredient reader, not just on food labels but on my personal care products as well. Ellovi’s ingredient lists are short, sweet, and reassuring that you don’t need an essay of unpronounceables to take care of yourself.

The chocolate mint lip balm gets my stomach grumbling for a trip to the Avondale Dairy Bar, too. That probably would have been easier, in hindsight, than trying to make mousse. Unlike how Ellovi has nailed the recipe for its products, that mousse needs bit of tweaking, mostly to make it more mousse-y.

No worries. My skin is happy and my taste buds weren’t too disappointed either.

I was provided with a sample of Ellovi’s body butter and lip balm but I was not required nor asked to write about them.