How to poach an egg to make Anthony Bourdain swoon 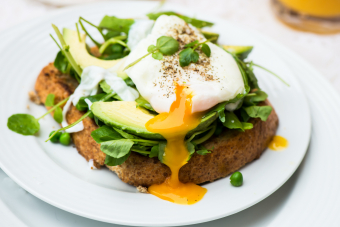 How you cook an egg says a lot about you in the kitchen. Here's how to poach an egg that would make Michael Ruhlman proud and Anthony Bourdain swoon.

This post was originally published in Niagara Life Magazine.

Anthony Bourdain once said you can tell someone's aptitude in a kitchen by how he cooks an egg.

That might leave you reconsidering that frittata the next time the brash celebrity chef comes for dinner but truth is, once you master the egg, you master much in the kitchen. Like anything, though, there are countless opinions on how to do it. Take the poached egg. Do you use vinegar in the cooking water? What about salt? Should you stir the cooking water while adding the egg? Suddenly breakfast is a PhD thesis. Good thing we've cracked the code on the perfect poach. All of the above work, just in different, nuanced ways. Here are the do's for whatever method you choose to poach an egg:

Being sweet on the sour

There have been volumes written about using vinegar in the cooking water when poaching an egg, and that's no yolk. The majority argue it's necessary to help an egg white form perfectly around a yolk instead of looking like it grew wings. But using vinegar doesn't keep an egg from resembling a jelly fish when put it in boiling water any more than not using it. Vinegar does make the white more toothsome, though. So if you like a white that's a little tacky between your teeth, then bring on the sour stuff. One teaspoon of vinegar per cup of cooking water is all that's needed.

Salt in cooking water is a matter of taste, and a nice touch if there's no Hollandaise to accompany your egg on your plate. It doesn't help the cooking process or ensure a perfect poached sphere. A generous pinch should suffice to season cooking water.

There's no need to stir cooking liquid to create the vortex that some say is critical to give a poached egg the proper shape. Our experiments showed that stirring resulted in more egg white separating from the yolk and being wasted. Water bubbling briskly is the key to ensuring the egg takes ideal form. It forces the floaty fringes to separate by the time it's done cooking.

Uniform instead of free-form

It's OK if doing a free-form poach makes you nervous. That's why someone invented the mould. It's still important to break eggs into a ramekin first, however. Ditto for bringing the water to a robust boil. When the mould is full, put a lid on the pot and remove it from the heat instead of leaving it on the burner. Let it sit for four minutes for soft yolks, six for firm. Break an egg... er, a leg   SaveSave