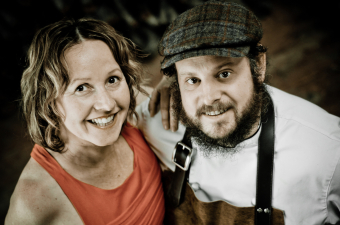 Backhouse in Niagara-on-the-Lake is a local favourite for its trademark cool climate cuisine and standing-room-only open mic nights.

Strip Mall Gems is a series of Eating Niagara, my column that runs in the St. Catharines Standard, Niagara Falls Review and Welland Tribune. This instalment is about Backhouse in Niagara-on-the-Lake.

It’s Monday night in Niagara-on-the-Lake and a six-year-old needs to practise her speech for a public speaking contest at school.

She doesn’t stand in front of a mirror at home, or sit her family on the living room couch to listen to her delivery. Instead, she takes to a microphone at the front of the house at Backhouse, the popular restaurant bookended by a convenience store and fast food joint on the corner of Mississauga and Mary streets.

When she finishes, there’s a good chance a local chef will take her place at the mic, looking to unwind on a day off by strumming a few chords on his guitar.

Backhouse is the house that husband-wife team Ryan Crawford and Bev Hotchkiss built. And, during its standing room-only open mic night, where crowds sip local brews and wine, and the lucky ones sit at a table to eat, it attests to the community that food — and good acoustics — can build.

“It’s great to see this other side of Niagara,” Hotchkiss said about the popularity of open mic night.

Crawford and Hotchkiss are familiar faces in here. They made their mark on Niagara’s culinary scene in this same venue when Backhouse was the acclaimed Stone Road Grille, where Crawford headed up the kitchen and Hotchkiss ran the front of the house under different ownership.

They left Stone Road in 2012, set on finding some land and opening an on-farm restaurant, modelled after an Italian agriturismo. The couple were “a signature away” from signing a deal in Collingwood when they learned their former haunt was up for grabs.

“It was serendipitous,” Hotchkiss said. “I felt like the mothership was like, ‘Go out, wander around, but you’ll be back.’”

After months of extensive renovations and anticipation that bordered on impatience, they opened last July to the relief of locals who missed Crawford’s wizardry behind the burner and Hotchkiss’s hospitality at the table. In the end, it made sense to return to where it all began.