Regrets and potato doughnuts + a giveaway for Per La Famiglia 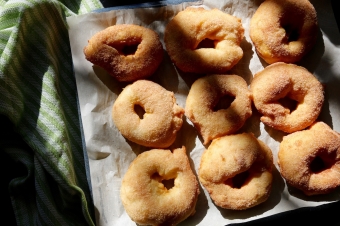 Per la Famiglia: Memories and Recipes of Southern Italian Cooking by Emily Richards is a delicious ode to family history and food.

Whitecap Books kindly provided me with a copy of Per La Famiglia: Memories and Recipes of Southern Italian Cooking for review but was given no input into the writing of this post. This post contains no affiliate links.

My biggest regret in life is not learning German.

Saturday mornings spent as a kid trying to master what noun went with which definite article — der Hund, die Katze, das Mädchen — when I’d have rather been watching cartoons was enough to alienate me from the entire process. And much to my Oma Mayer’s disappointment, the rest of her existence was spent speaking in a German-English pidgin that included lots of gesturing when we were together.

Now, nearly three years after her death, I’m finally trying to master the language. But for every new word I gain, I become more acutely aware of what I lost by having waited this long, including learning from her in the kitchen when I’d visit her in Germany. I will never know how she made her sour beans and can only glean from my dad that she must have fermented them — “They took days to make” is all he knows of the process. What went into that cucumber salad that made everyone rave will also remain a mystery. Her schnitzel was perfection, her lentil soup pure comfort. Her cheesecake and Apfelkuchen, absolute treasures. I will never have the knowledge to make them just so, despite realizing during my final visits with her what was at stake and trying to make up for lost time.

Potato doughnuts from Per La Famiglia by Emily Richards

That’s why I appreciate — love, even — when cookbooks like Emily Richards’ Per La Familia:  Memories and Recipes of Southern Italian Home Cooking come my way.

In it, Richards endeavours to do what I was too shortsighted to do myself: preserve her family’s history and culture by writing down the recipes prevalent in both. From the introduction to the last recipe — ravioli cookies — Richards tells the story of how food connected her immigrant ancestors to their homeland in the bottom of Italy’s boot, while helping them adapt to their adopted country, Canada, particularly when substituting local ingredients for Italian ones in their cooking.

More than a celebration of Italian cuisine,  Per La Famiglia shows the importance of food to the celebration itself. Richards offers menus to mark Easter, baptism, and Christmas. She even includes chapters called Easter and Christmas among the usual cookbook suspects of mains, vegetables and desserts. I really appreciate her putting her kitchen staples chapter first when those often appear as the final entries in other cookbooks. After all, the dried herbs and stocks she teaches us to make reappear and are referenced in other recipes, so might as well get familiar with and master those first. Smart, that one. The recipes are straightforward, just like the cuisine they depict. There’s no cutting corners in any of them, however. They’re teaching tools for making pasta, pizza dough, sausage and cheese, all of which give a sense of accomplishment and more intimate knowledge of cookery along with a good meal.

They also feel familiar thanks to introductions filled with bits of Italian culinary history or Richards’ own memories of eating a particular food. Most important, though, is what the recipes deliver. Wilted spinach and garlic crostini were a quick and easy lunch that made me feel like I was treating myself despite its simplicity.

Wilted spinach and garlic crostini from Per La Famiglia by Emily Richards.

The bean puttanesca tapped into my stash of pantry staples  — no need for a trip to the grocery store — and made for a hearty meal I’ve been asked to repeat. And the roasted tomatoes convinced me to play around with fruit I normally only eat in the summer. Richards’ version is unadulterated, using only olive oil and a few herbs, reinforcing the Italian way of eating in season when ingredients are at the height of freshness and flavour. My second attempt at them had me adding salt, sugar and pepper, which I know won't be needed when I try again during tomato season in mid-August.

But it was the potato doughnuts that really piqued my curiosity. I  had a ton of taters to use up from my winter CSA and was in the habit of making potato bread to help my cause. Doughnuts seemed like the perfect addition to my potato baking repertoire. And besides, next to pie and before kale, they're my favourite food. A quick scan of the recipe didn't leave me feeling daunted by what would be my first foray into doughnut making.

Kudos to Richards who, as a professional home economist, would know how to make food preparation of any kind approachable for all skill sets. And while I can’t say my lumpy, bumpy, misshapen versions turned out as pretty as those of the seasoned pro who inspired them, they made me swoon at first bite. Remarkable what some flour, yeast, mashed potatoes and hot oil can do. They were soft, sweet and airy in those first bites when still warm. But with nearly three dozen decked out with sugar and cinnamon, I happily played doughnut fairy and delivered them to friends and family.

The compliments came easily. My mom cursed me for throwing off her diet, then asked to borrow the cookbook. I think we may have found a recipe to pass along within our family. In the acknowledgements, Richards says “I hope these ‘Food memories’ live on in the generations to come.” Those doughnuts certainly will. “Sharing time in the kitchen with mothers, aunts and Nonnas is a way to gather your history in the kitchen,” Richards writes. “By not spending that time in the kitchen with your family members, recipes can be lost. When possible, try to get in the kitchen with them and take notes, take part and taste what can become of ingredients. It’s a special moment to have.” True words.

Take it from someone who missed out on those moments. I don't have sour beans and Apfelkuchen, but I do have potato doughnuts now. A worthy consolation. Want to win a copy of Per La Famiglia? Enter below. Up your chances by visiting the following fine bloggers and reading their reviews, too. The Brunette Baker Dinner with Julie The Busy Baker The Tasty Gardener My Daily Randomness Libby Roach She Eats Devour & Conquer gotta get baked Once Upon a Recipe Culinary Cool The Yum Yum Factor kellyneil.com Strawberries for Supper

This giveaway is open to all legal residents of Canada who have reached the age of majority at the time of the contest in the province or territory in which they reside.

Void in Quebec.
No purchase necessary to enter.
Giveaway will run from Wednesday, March 23, 2016 at 12:01am to end on Wednesday, March 30, 2016 at 11:59pm. Winner is chosen at random via Rafflecopter. Winner will be contacted via email and given 48 hours to respond.  If not, a new winner will be chosen. Winner selected MUST correctly answer a skill-testing mathematical question. Winner's name will be displayed on Rafflecopter widget. Email address will never be given out to any third party or anyone for that matter.
Prize value is approximately $75CDN.