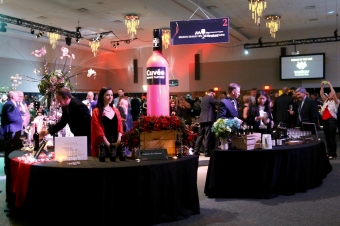 Cuvée is an annual celebration of local wine that reconnects Niagara and tipple lovers to the wine industry with a gala and tasting passport program.

It was late in my tenure at the paper when a study about Niagara residents feeling increasingly disconnected from the local wine industry was released.

For a place where stories abound about the rite of passage of swilling Baby Duck at the high school prom, this was incredibly newsworthy.

The wine industry always seemed as quintessentially Niagara as tender fruit and rushing water, and though we’ve willingly shared those with others, they've always been ours. At the root of the growing disconnect were changes made to the Niagara Wine Festival, starting in 2002 when ‘Grape’ was dropped from its name followed by having to pay to get into Montebello Park during the 2007 festival when it had always been free; and changes that same year to rules about the appearance of Grande Parade participants.

At times, the newspaper didn’t help matters, despite what was likely record coverage in the way of wine reviews and industry news. Just as the economy collapsed in 2008, the decision was made to run an above-the-fold story about the release of an icewine that ran $400 a bottle. A photo of the earnest winemaker holding a bottle as though offering it to the camera ran with it. On that same page were stories of local job cuts and growing fears of the Great Recession, with Niagara headed at high speed into having one of worst jobless rates in the country. It was clear who wouldn't be drinking that wine. It was an editorial decision that still makes me wince.

The Importance of Cuvée

Despite the blunders, the wine industry remains a cornerstone of the region’s economy and the events surrounding and supporting it remain relevant — and critical to Niagara’s social and economic well-being, even its civic pride. Take Cuvée. Once dubbed the Oscars of the Ontario Wine Industry, Cuvée is a celebration of excellence in winemaking. While the awards given out may not resonate with everyone who doesn’t have a connection to the industry or consider themselves much of an oenophile, Cuvée serves to rebuild and strengthen that connection between Niagarans and the local wine industry. Here’s how: The money raised from the event supports the education of future winemakers, grape growers and industry science minds. The Cuvée Legacy Fund, established after last year’s event, has already awarded $15,000 in scholarships to students at Brock University and contributed $13,000 to research that will benefit the industry, and ultimately lead to higher quality wines.

Earlier this month at the 2016 edition of Cuvée, four students were awarded bursaries of $2,500 or $5,000 to support their studies and prepare them to take the helm in that nearby vineyard or winery, or to establish their own. They are the future employed and employers, the ones who will continue working to make Niagara a world-class wine region, growing the industry with their skill and expertise. A better and bigger industry means more jobs at the wineries themselves and through the ripple effect of more wine tourism: Restaurants, hotels, entertainment and anything else under the hospitality umbrella.

From there, restaurants may choose to buy ingredients from local farmers; hotels may hire the local interior design firm when its time for a makeover; entertainment venues can give a stage to local, national and international talent. And on it goes from there. As it stands, every bottle of Ontario VQA wine sold in the province generates $12.29 in added value thanks to all those ripples (that stat comes compliments of Wine Country Ontario). How cool would it be to see that number grow? Cuvée and its legacy fund will undoubtedly help it along. And in a game of six degrees of separation, I’d bet few Niagarans would have to go back that far to be connected to and benefit from the industry, despite that disconnect recorded in that survey.

More simply, this goes back to what I was saying in my last post. When our neighbour succeeds, we all succeed, and Cuvée, be it through those scholarships, or awards that generate buzz about a wine, is helping us succeed.

A Niagara College Culinary Student plates porcini-marinated scallops with shaved chestnut mushroom, parsley and cauliflower for the restaurant at Redstone Winery at Cuvée 2016.

A Wine Event for Everyone

Cuvée is also accessible. It’s true the Grand Tasting costs $200 to attend, making it an exclusive affair. But the Cuvée en Route passport runs $30 to give even more people a taste of the industry’s best with the added perk of not having to break out the suit and tie to do it. It’s a tasting pass giving access to winemakers' selections over two days. Thats's easy way for Niagarans to reconnect with or reaffirm their love of the industry. Speaking of which, here’s a rundown of the standout wines I sampled at the Grand Tasting. I tasted many lip-smacking, wonderful vintages, but these are the ones that more than a week later, leave me wanting more. Go out and buy several bottles if you can.

Let me start by saying wow. I’m a fence sitter when it comes to Chardonnay. I’ll drink it and there’s a good chance I’ll enjoy it but the chances increase if it’s unoaked. I know, drink Riesling instead, right? This wine makes be a bona fide Chardonnay fan. It’s oaked but you’d never know. It’s subtle and infinitely drinkable on its own. It’s creamy with apricot and pear notes, and there were fewer than three dozen cases made. Seriously, go get some while you can. Visit 16 Mile Cellar

At first sniff, it’s all burnt sugar. It’s a beautiful smell so of course I wanted to drink this bubbly. Next celebration, this is the wine whose cork I’m popping. It’s light and refreshing with plenty of citrus and no overt sweetness to be found beyond the smell. Visit Westcott Vineyards

I love Riesling and I’ve had enough of it in my time that I like to think I know what to expect from a Niagara Riesling in my glass. Thank you Sue-Ann Staff for throwing me for a curve with this one. Like 16 Mile Cellar’s Chardonnay, this is unlike any Riesling I’ve had, remarkable in how distinguished it is at such a young age. There’s already diesel notes, which I would expect from an older vintage. It’s not overly sweet but layered and complex, flitting between dry and off-dry. Every sip got more interesting. Visit Sue-Ann Staff Estate Winery

I took one sip of this and tweeted ‘Drink this wine.’ When it comes to red, I’m typically on Team Cab Franc or Gamay Noir. This wine makes me want to become a card-carrying member of Team Pinot Noir. It’s incredibly smooth with no overwhelming tannins. It’s decadent and will only get better with age. Visit Domaine Queylus

Gamay is the wine that taught me I could be a red-wine drinker. It is the quintessential introductory red. And like Riesling, there are certain traits that have become familiar to me, particularly the spice notes. I often drink Gamay and wish I had a gingerbread cookie to go with it. Enter Stratus Gamay. This is not your introductory Gamay. This is the Gamay that people like me graduate to after its lighter-bodied cousins have prepared us for the world of red wine. It can also convince the most serious red wine drinker, lusting after full-bodied vintages, that they, too, can love this grape. Another surprise, for sure. Visit Stratus Vineyards