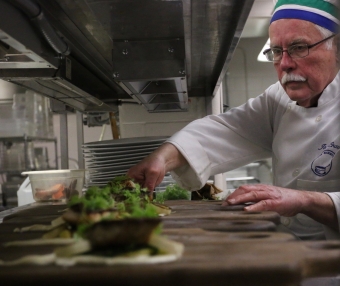 Les Marmitons Niagara is a men's cooking group that meets monthly at the Canadian Food and Wine Institute to cook and eat together.

There are few people who can carry a dinner conversation about sous-vide cooking.

But Ross Macfarlane and his fellow members of Les Marmitons Niagara are aces at it.

It’s what you’d expect from a group of men who gather once a month to cook a gourmet meal in the kitchen at Niagara College’s Benchmark restaurant, and under the direction of some of Niagara’s top culinary talent.

Although they can’t agree on the merit of slow-cooking steak in a water bath —Macfarlane holds fast to cooking meat on his Big Green Egg grill — all differences are set aside in the kitchen in the name of learning the art and science of cookery, and eating each lesson afterward.

In the process, they disprove the adage that too many cooks spoil the broth. If anything, having 20-plus men chopping, roasting, grilling or boiling makes that broth, and what would otherwise be another Monday night, more delectable.

“I love getting into the kitchen and putting it all together,” Macfarlane said about making a meal with his Marmitons pals. “The camaraderie in the kitchen is great. Everyone gets along well and they generally have a good time.”

So much so that based on Macfarlane’s Twitter feed on the first Monday of the month when Les Marmitons meet, I often wish I was genetically predisposed to join them.

Les Marmitons Niagara is the local chapter of an international social and gastronomy club for men interested in food, wine and the culinary arts. Every month, they enlist a local chef to lead them through preparing and eating a multi-course meal. The group has been around officially since 2005 but it was in the works for some time before that, thanks to founder Macfarlane’s tenacity and appetite for good food and company.