The February Listicle: Locavores do it better 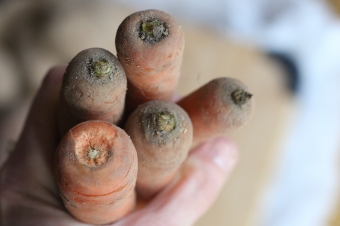 It’s no secret I’m a locavore.

Encouraging people to eat local when possible was the raison d’être for this blog and it was a big reason I chose to cover agriculture as a reporter. It’s going to sound all motherhood and apple pie, but I do it because eating locally grown and produced food is socially sustainable. When your neighbour succeeds, we all succeed, so why not buy the squash from the guy growing them down the road instead of scooping up the Mexican variety from the grocery store? A little story about that squash from down the road, if I may: It’s grown by a young farming family who dream of earning an income from working the land.

For now, one of the adults has to work off the farm to support their vegetable growing habit, but the goal is to earn a living solely from farming one day. They started a CSA a few years ago, selling weekly shares of vegetables in the summer and fall with the hopes of raising enough money to see their farm through each growing season.

After a few years, thanks to those who supported their vision, they expanded their operations and hired someone to work for them. An off-farm job was still needed to make sure all their bills were covered, but someone else is now gainfully employed.

Garlic from my summer CSA, still good in February.

And on it ripples until one day, they no longer need off-farm income and have to add a few more people to the payroll. It’s an oversimplified version of a story in the works right now where I get my winter vegetables. After years of doing everything themselves, the folks running the farm were able to hire someone to help them. In turn, that person spends the money she earns locally  and perhaps grows someone else’s business. That’s what gets me about eating local food, or consuming anything that’s made locally. It’s good for the economy, and all of us as a result. And that’s why I preach the ‘eat local’ mantra, whether it’s subscribing to a CSA, frequenting a farm stand or even eating at an independent restaurant. But I also keep in mind that not everyone can do this. Maybe getting to a farm is a challenge. Perhaps someone can’t afford $6 for a quart of local strawberries and so the $2.99-versions from California have to do. Someone could hate squash and instead keep spinach growers from afar in the green during the winter. Totally fine. Really. I confess I have a weakness for bitter melon (thanks Dominican Republic!), citrus anything (props to you California!), and Pink Lady apples (Minnesota, you rock!). I drink tea from China and eat chocolate from nowhere near Niagara. I can't, however, eat tomatoes out of season and from afar. They’re mealy, gritty, flavourless orbs at this time of year. This story, which I found a link to on one of my favourite blogs, has me reconsidering my stance, though.

Maybe it’s worth forgoing the canned tomatoes I live on at this time of year, even once in a while, for fresh if they can actually taste good, like the chef who wrote this piece promises. While I disagreed with some of Amanda Cohen’s arguments in favour of out-of-season tomatoes (I’m not being elitist by being a locavore, I’m just doing the best I can to eat with intention), I do agree with much of what she says. Sometimes, we need to cut ourselves some slack. After all, we live where the growing season has a definite beginning and ending, and trust me when I say there’s only so much squash one person can eat in a week. Or in a winter for that matter.

Not-so-local spinach on bread made with my CSA potatoes.

If I decide to eat these winter tomatoes, I know I’ll make it up this summer by devouring nothing but vegetables from my CSA basket and the farm stand a few concessions over. So here’s to eating with intention while accepting that sometimes a canned tomato doesn’t cut it, even in February.

Speaking of treating yourself, my friend and chef Christian Martell has started a popup dinner series in Hamilton called Florabelle Dining. Get a ticket and go. I first connected with Christian on Twitter a few years ago and the next thing I knew, we were digging up burdock root on a foraging adventure. He’s a young, thoughtful chef who shows respect for his muse in the menus he creates. And he’s a good guy who happens to hail from Niagara. If that doesn’t entice you to support this local endeavour, I don’t know what will.

Pop-ups are definitely popping up all over. I love the concept of getting chefs out of their usual kitchen and having them create one-off menus in unexpected locations. Chef Patrick Wiese is launching his Intimate series of pop-up dinners on April 8. They’ll run every second Friday for 10 weeks at a secret location in Hamilton.

Last week, he gave a preview of what’s to come and it’s impressive. He created a four-course menu inspired by his travels to Iceland, and paired each dish, with its myriad flavours, with a wine from Chateau des Charmes (their Gamay Noir is one of my favourites). It was fabulous. Better still, Wiese, who is Avril Lavigne’s personal chef and also does the food for special events at Niagara’s Flat Rock Cellars, didn’t give us vegetarians and vegans the cold shoulder. Our dishes were equally thoughtful as the meat eaters' among us, with kohlrabi and rutabaga stepping in to play starring roles on our plates. Give Wiese’s Twisted Kitchen a visit to get your tickets. Editor’s Note: I attended the preview of Wiese’s Intimate series gratis but my opinion that what he’s cooking up is smokin’ is dictated entirely by my taste buds.

And now back to exotic and international. My Strip Mall Gems series started last month in the Niagara dailies. First up was Don Wong Mexican-Asian Food Mart. There are plenty of imported avocados harmed in the daily operations of this Niagara Falls eatery. But I guarantee there will be no guilt felt when you tuck your tortilla chip into their guacamole or take a bite of one of their burritos topped with the stuff.

Feast On at Backhouse

Perhaps you’re more in the mood for fermented broccoli, creme fraiche, apple and carrot all in the same soup bowl. (Sign me up, I say!) Backhouse in Niagara-on-the-Lake can hook you up or at least provide you with something just as creative and local.

Backhouse is the restaurant helmed by chef Ryan Crawford, formerly of Stone Road Grill fame. He and partner Bev Hotchkiss opened Backhouse last summer in the old Stone Road Grill location, and provenance features prominently on the menu. Backhouse is a FeastON certified restaurant. Some people get weary of certification programs. What does that really mean anyway? Good question. FeastON was launched by the Ontario Culinary Tourism Alliance, in partnership with Foodland Ontario, in 2014.

The purpose was to encourage restaurants to use more local food while giving diners the peace of mind they really were eating ingredients sourced from nearby. All certified eateries — everything from food trucks to fine dining — must source a minimum 25 per cent Ontario food and beverage products to be certified. They also have to show their receipts to prove it. As diners, we can trust what’s on the menu but more than that, FeastON helps to formalize a culinary identity for the province.

That means fermented broccoli on a menu in February is an example of Crawford keeping it real. Crawford and Hotchkiss have a farmer on staff at their restaurant, and everyone in the kitchen has to put in time at the farm, doing away with all disconnect between what’s on your plate, how it got there and who grew it.

Last week, they hosted a charity event to benefit Go Girls!, a group-mentoring program run by Big Brothers-Big Sisters. Remember what I said about the social sustainability of eating and supporting local? This is it in action. To keep the goodness going, I have two Backhouse gift certificates to give away. Thanks Ontario Culinary Tourism Alliance and Backhouse for providing me with them. Want one? Follow the prompts from Rafflecopter below. The only other requirement is that when spending your Backhouse bucks, you post photos from your meal to Twitter or Instagram, tagging @OCTA_licious and using the #FeastOn hashtag. Editor's note: Perhaps I'll see you at Backhouse. I received a gift certificate to the restaurant from OCTA as compensation for hosting this giveaway. OCTA did not see or edit this post before it went live. a Rafflecopter giveaway