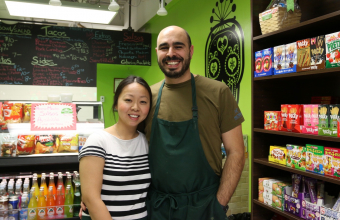 Don Wong Mexican Asian Food Mart is a Cal Mex and Asian takeout joint in Niagara Falls serving up some of the region's best burritos.

Strip Mall Gems is a series of Eating Niagara, my column that runs in the St. Catharines Standard, Niagara Falls Review and Welland Tribune. This instalment is about Don Wong Asian Mexican Food Mart in Niagara Falls.

All you want is a burrito.

Even better would be some Pocky for dessert.

Refried beans rolled in a tortilla as a main and Japanese chocolate-covered biscuit sticks for the finale have pregnancy craving written all over them. At the very least, it’s a curious culinary mashup.

For Attilio Lorenzo and Cyndi Wong-Lorenzo, however, it’s a business plan.

The husband and wife team are the proprietors of Don Wong Mexican Asian Food Mart at Dorchester and Thorold Stone roads in Niagara Falls, a one-stop shop for San Francisco Mission-style burritos to eat now and rice vermicelli to cook later at home.

There’s no doubt Mexican take-out paired with Asian groceries is quirky. But it’s filling a need — for the Lorenzos and for those lusting after sweet potatoes and pico de gallo folded together in one of the most perfectly portable foods; or in need of Kewpie mayonnaise, pickled ginger and rice paper.

And if you ask them, really they’re one in the same.

Turn the clock back two years and the couple was newly transplanted to Niagara Falls, where Lorenzo grew up. They moved here because it struck them as a good place to raise their family. Still, Lorenzo could be found commuting to Toronto every day, slugging burritos at Mission Burrito, the shop they opened at McColl and Dundas streets a decade ago after finding inspiration in the taquerias of San Francisco.

He stuffed and steamed burritos non-stop between 11 and 3 every day, and felt the grind more with each order of carnitas and mile of highway that passed by him.