Lentils are the new black: The January Listicle 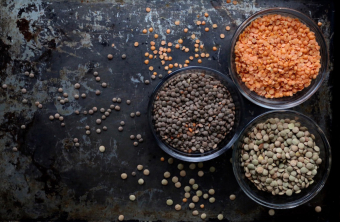 So much for no longer being grossed out by eating food drooled on by my daughter.

It seems that in trying to spare too much grub from winding up in our green bin, I’ve sacrificed my immune system. I’ve been taken down by a bug for the third time in a month and while I can’t be certain it was her, I’m blaming the person who loves to spread her saliva everywhere, including on me. So I was going to post a how-to for my feel-better elixir, my winter lemonade. But it’s the most un-Niagara recipe ever (lemons, fresh ginger and turmeric, and cayenne) save for the dollop of honey added at the end, which is proudly from Bartel Farms.

If you have the chance to get your hands on a jar, do it. It’s liquid gold; nuanced and as much an example of Niagara terroir as a bottle of Riesling made here. That said, it seemed like the perfect time for a listicle. A lentil listicle, to be exact. You’d have to be living under a giant ribeye not to know that 2016 is the International Year of Pulses, which has more cachet than Year of the Bean, which pulses ultimately are. I’m thrilled for the lentil and chickpea, two of my favourite protein and iron-packed pulse crops. For years, I was teased about my affinity for both by co-workers who thought I was out to lunch when I pulled out my meatless midday meals starring one or the other. Now, thanks to a United Nations declaration, it’s tough beans for kale in the popularity contest this year. Pulses are no more Niagara than that winter lemonade of mine (I’m jealous of my former home, Saskatchewan, right now), but they can certainly be paired with many made-in-Niagara foods. For that reason, they get a pass.

Here are some other reasons I’m devoting a few words to them: According to FoodTank, 43 gallons of water can produce one pound of pulses compared with 216 gallons for soybeans and 368 gallons for peanuts. And production of pulses emits only 5 percent of the greenhouse gas emissions associated with beef production. So there you go. Let the love for lentils flow freely this year and beyond. On that note, the list. Here are some of my favourite Eating Niagara lentil recipes and others from around the web:

When the world (aka your well-intentioned neighbour/co-worker/aunt) gives you zucchini this summer, make lasagna and layer the world’s most derided summer squash with lentils. No one wants to be in a carb coma in the summer. Praise the zucchini for sparing us that by stepping in for the noodle, and thanks to the lentil for making this meal rich.

I fell in love with lentil soup at my Oma Mayer’s table in Zweibrücken. She made a big pot for lunch one day and I kept asking for more. I was six and had as many helpings until the pot was empty. She was astounded at my appetite. So was I. I wish today that I remembered more than loving it so that I could make it myself. Sadly, it’s one of those recipes I didn’t get from her before she died. So instead, I have my own take on lentil soup. It’s simple but it’s flavourful and nourishing.

Don’t call my sweet potato, lentil and chipotle dip hummus. I almost made that mistake before doing some research. But feel free to call it your new favourite snack. After all, it’s mine.

I love a good curry. It’s incredibly warming, from the tip of your tongue to the deepest parts of your belly and out to your the very ends of your fingers and toes. This recipe for chickpea curry can star kale, just so it doesn’t feel totally left out, or any green you have handy.

We All Love Lentils

Spreading the love for lentils around the region, fellow Niagaran Laura Wright at The First Mess has done up this beauty starring French lentils, which get a prominent spot in my pantry for holding their shape when cooked. Kale and mushrooms keep it local while coconut just adds to the international flair brought to you by the du Puy lentil. And over at Tara O’Brady’s Seven Spoons, there are lentils done up as baked beans. Some smoked tofu subbed in for the bacon makes it vegetarian. Someone get me some Field Roast franks to go with this, please.

Here’s a tale about a man who made the best lentil soup ever. (Sorry Oma Mayer.) I hate calling anything the best but in this case, I stand by that proclamation. I have many memories of eating Tony’s soup on the hottest July days, sitting on the St. Catharines Public Library steps, or doing lunch al desko with a bowl in the winter. A man named Khalid has taken over Tony’s stall at the farmers market and the lentil soup recipe has been shared with him, ensuring Tony’s legacy lives on. My goal is to one day make this soup with Khalid or Tony’s widow, Amira.

Renée Kohlman is a food writer and recipe developer extraordinaire. Her blog is among my favourites. And this recipe for red lentil falafel is getting bookmarked. It’s beautiful and further shows the versatility of the lovely lentil.

And some other reading about beans of a different kind: Niagara has a new coffee roaster. Block Coffee Roasters is another example of the young and entrepreneurial in Niagara’s food scene. How lucky are we?

Finally, got a pulse recipe you want to share? Here’s how to do it and become world famous in the process.  Until the next listicle.