Posted Jan 7th, 2016 in Recipes, Summer Recipes, In The Kitchen 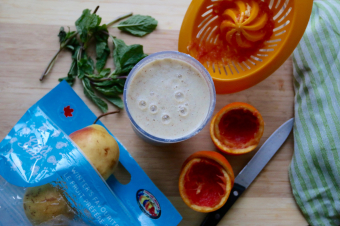 These recipes for smoothies using the Cold Snap pear with chocolate or orange juice will give you the boost you need to get through your day.

When I grow up, I want to be just like my toddler.

She is the most honest person I know. Not in a brutal way, not even in a blunt way; simply in a matter-of-fact way because she knows no alternative. Take, for example, when I cook something. She is my official taste-tester. After gale-force blowing on a spoon loaded with something hot off the burner, I offer her a sample of my work and ask the scariest question known to any cook: Good? Does baby like it? She’ll nod emphatically if my creation makes the cut. If not, I get a simple ‘No’ and she walks away, making clear she doesn’t want any more. Her answer is said with no malice; no harm intended whatsoever. It simply is what it is. And I love her so much for it.

My 21-month-old is in the most perfect stage of human being right now. It seems a shame we as a species progress beyond this point in our development. Sure, we gain other valuable skills and traits when we do (toilet training, yay!), but sometimes, it seems to be at the expense of others, like having no fear of saying what’s on our minds, and to say it with no other intention than expressing how we truly feel.

One food my girl does relish — and one that requires little interference from me, save for slicing — is pears. “Pay-a?” she asks with a Bostonian lilt as she points to the fridge. That’s my cue to rummage for the bell-shaped fruit. Because of that frequent request, I’ve eaten more pears this winter than I have in the past 20. I realize this might surprise some who've heard me champion the likes of the lowliest pear ever, the Kieffer.

People probably think pears are all I eat, especially at this time of year. But save for a few I skim off the top of Garden of Eating - Niagara harvests, my winters are reserved for apples and that most non-local fruit family, citrus. The reason for more pears in my belly this year isn’t entirely my daughter’s doing. This is the first year the Cold Snap pear has been available in the grocery store, marketed as a single variety, rather than blended in produce section bins with its most white-bread relative, the Bartlett.

I first tasted a Cold Snap, then a numbered variety hot off the Vineland Research Station tree, in 2008, when its breeder, David Hunter, offered samples at the Royal Winter Fair with the hope it would inspire a proper name for his work. It did but that moniker was a dud.

While I haven’t been sworn to secrecy, nor have I made a pact to never utter that name again, I do know pear growers who cringe at mere mention of it, and they might black ball me from their orchards if I repeat it here. Fortunately, someone realized that after more than two decades of work to create this masterpiece, it deserved better.

So David Hunter’s pear underwent a brand makeover and was reinvented as the Cold Snap. It’s a cool name and an even cooler pear — did I mention it’s a descendant of the disease-resistant Kieffer? That’s right. Props to the lowliest pear ever for spawning this darling, which resembles its woody ancestor in its stocky shape.

The Cold Snap is also the first pear my daughter ate. She immediately asked for a second. Unfortunately, my grocery store can’t keep up with the demand — ours or that of others. My go-to supermarket gets a few bags at a time and then its neither stem nor blossom end of them for weeks until the next shipment. Aside from eating them fresh, we’ve discovered they make great smoothies. “Moonies,” my daughter calls them. The first one is the kick in the pants needed to start one’s day; a drinkable breakfast that says “Bring it, Monday,” with the Cold Snap complemented by fresh-squeezed orange juice, yogurt and just enough mint to say ‘Hey there.’

The second smoothie, decadent with cocoa, and rich with almond butter and avocado, tends to ease one into the day; perfect for those sit-and-read-the-paper, sip-your-smoothie, and I-guess-I’d-better-go-shower mornings. And both get an emphatic nod when I asked my daughter if she likes them. In fact, they even get a “Moah, moah.” That’s “more” to the rest of us, and rest assured, she’s not the type to feed me a line.

The Eye Opener and The Easy Does It: Cold Snap pear smoothies

I love everything about these smoothies, from the sweetness of the pears playing off the acidity of the oranges to the freshness of the mint. Then there's the decadence of cocoa and pear. Wow! When I first started scrawling down recipe ideas, I didn't think I'd like orange-pear-mint combo so much, but of the two smoothies, it's my favourite and leaves me feeling like I can tackle anything the day brings.

For the Eye Opener

For the Easy Does It

For the Eye Opener

*If you're pressed for time and don't want to juice your oranges, you can use ready-made orange juice, but the flavour is stronger.

** In the spirit of keeping this smoothie as local as possible, I use maple syrup as a sweetener. But 2 pitted medjool dates also work beautifully and provide an extra jolt of potassium.

Put all ingredients into a blender and blend until smooth.

For the Easy Does It

*As with The Eye Opener, swap 2 medjool dates for the maple syrup for sweetness, if you prefer.

Put all ingredients into a blender and blend until smooth.

Then sit back and drink up.