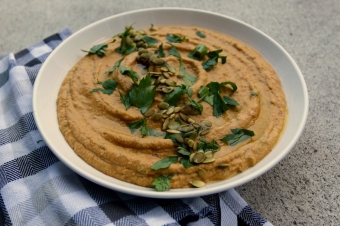 Sweet potato chipotle dip combines the nutritional punch of sweet potatoes and red lentils with a pop of smoky spice from chipotle peppers.

I feel like I’m about to go into Mike Myers à la Coffee Talk with Linda Richman-mode as I type this.

Is it the chickpeas? The tahini? Both? Discuss.

Considering hummus is Arabic for chickpea, I’m thinking the garbanzo is critical to hummus being hummus. According to the mighty Wikipedia, hummus’s full name is hummus bi tahina, so I’m leaning toward sesame paste being equally as important to its identity.

So when is hummus not hummus and just a dip? Sorry if you’re getting a brain cramp here. These are the philosophical questions I’ve been asking as I’ve been plotting what I thought would be sweet potato hummus but swapping the chickpeas for red lentils and the tahini for pumpkin seed butter.

After reading about the history of hummus, pita’s soul mate since the 13th century, I realized I was making a mere dip, despite the pulse-seed butter parallels.

Whatever. When your CSA basket gives you the most perfect sweet potatoes, you try to find uses for them. And when a grocery store salad eaten on a holiday shopping timeout sates while serving as a muse for how to use up those toothsome tubers, you just run with it and worry about the hair-splitting, genus-species stuff later.

Back to what’s important: those sweet potatoes. Anyone who’s tried to grow them locally has probably been a little exasperated with the experience. Despite the popularity of the sweet spuds, they typically don’t grow well in Canada, even in banana belt Niagara. Our growing season is too short, which is why sometimes you’ll see scrawny, scraggly local versions. They just haven’t had the time and heat to mature into those imported model citizens you find at grocery store.

Last year, I went on a tour at the Vineland Research and Innovation Centre open house where a herd of us ag nerds learned scientists there are creating a sweet potato that will thrive in Canadian fields. I wonder if those scientists have visited Creek Shore Farms where farmers Ryan and Amanda Thiessen seem to have cracked the code. Their sweet potatoes are ideal in size and shape, with brick skins and tapered ends and substantial heft. Beauties, really, rather than the makings of horror movie props. And lucky for me (not so much my stone-producing kidneys), they show up regularly in my weekly winter basket.

I’d already turned some into soups and chilis. But a dip? It seemed ideal since we’re all in hostess with the mostest mode with the holidays looming.

Still, there was something about tahini’s sometimes acrid tang that didn’t sit well with me when paired with a sweet potato. Pumpkin seed butter seemed sublime. And red lentils, well, I had them handy. To keep them from taking a one-way trip to Blandsville, I threw in some chipotle peppers. I opted not to let garlic upstage everything and used gentler green onions instead. There’s still lemon to link it back, however loosely, to the original inspiration of hummus. And olive oil to make it all velvety.

As for the taste of this sweet potato chipotle dip, I’ll give you one guess: Like buttah. (If you're looking for another dip for a holiday party, let me recommend my Tokyo Caviar, though you'll have to settle for frozen edamame at this time of year.)

This dip is a great way to pack some nutritional powerhouses into a snack to enjoy at a holiday party or pack in your lunch. Stores up to three days in the fridge. For local sweet potatoes, check out Creek Shore Farms in St. Catharines or Tree and Twig Heirloom Vegetables in Wellandport.

Clean and wrap the sweet potato in aluminum foil and bake for 40-50 minutes or until soft enough to pierce easily with a fork.

Remove from oven and set aside to cool.

Cook red lentils by boiling until tender but still holding their shape, about 15 minutes. Drain and set aside.

Remove skin from sweet potato (this should peel off easily using your fingers).

Put sweet potato, lentils, pumpkin seed butter, green onions, chipotle peppers, lemon juice and salt into a food processor and process until smooth, adding olive oil one tablespoon at a time. You made need to stop midway to scrape down the sides of the processor bowl and get every bit puréed.

Scoop dip into a bowl and let sit for 30 minutes before serving. Garnish with parsley, pepitas, and drizzle with olive oil. Serve with your favourite corn chips, crackers or pita.