Made in India (and Niagara): Meera Sodha's pav bhaji 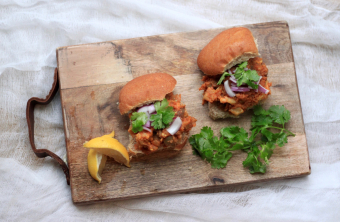 I’m going to get right to it here, sparing you my usual meandering story off the top.

I did have one planned — of course — about an Indian cooking class I took at Niagara College and how much I adored the instructor. I’ll get to it soon enough, if you’d care to stick around, but I’m going to tell to what you need to know right now: Get a copy of Meera Sodha’s Made in India: Recipes from an Indian Kitchen (Flatiron Books, $32) and give it a place of prominence on your cookbook shelf. And now back to meandering. I signed up for that Indian cooking class three years ago to demystify cooking proper Indian food.

When paprika was as complicated as the household spice cupboard got growing up the child of German parents, cumin, coriander and cardamom were a whole new, intimidating world. I've also never been one to open a can of chickpeas and a jar of pre-fab sauce and call it a curry, yet I wanted more in my repertoire than my chickpea curry with greens made sans store-bought sauce.  I wanted spices synonymous with the sub-continent; the bold flavours, the nuanced ones.

Pulses cooked perfectly tender and holding their shape. Delicate desserts that seemed almost precious. Equilateral triangles of pastry stuffed with potatoes and peas — c’mon, who doesn’t dig a samosa? All of that usually added up to a spectacular meal out — made by someone else — and never did I have anything to do with it, save for the eating. So when that Indian cooking class appeared in the continuing ed calendar at the college, I laid down my $284-course fee without hesitation.

I was going to learn how to cook a cuisine that had become a calling card for me when I went vegetarian 10 years ago. After all, with my diet, I’ll leave an Indian restaurant more satisfied than I will a German one.

My instructor, Jasjit, was warm and decorous. I wanted to hug her every time I saw her. We cooked enough food with her each week that I went for days without having to lift a chef’s knife in my own kitchen. She introduced me to bitter melon and made me fall hard for something that brings back childhood memories of food more like punishment than nourishment for most of my Indian friends. She arrived to each class with new pickles and chutneys to sample.

We nibbled on tamarind as she espoused its many purported health benefits. And there were always Jasjit’s bonus recipes that she’d do up to enjoy with our chai as we waited for the day’s main assignment to finish cooking. She was a natural hostess, motherly in her hospitality. She taught me tricks that I carried forward into my own kitchen, like introducing spices early to the cooking process — usually during the sweating of the onions — to open them up and draw out every subtlety that would turn a recipe into something rich and layered. She made clear each spice’s role in building a dish, much the way instruments piggyback upon each other to build a symphony.

Then the class ended and I carried on as I’d always had in my kitchen, making chickpea curry with greens (which I truly adore). Granted, I tweaked the recipe with that bit of knowledge about adding the spices earlier in the cooking, much to my taste buds’ benefit. And yes, I always have a jar of lime or mango pickle on hand now. Turmeric, black mustard seed, and green and black cardamom also have a rightful place in my spice cupboard. And I have a block of tamarind paste in my pantry, too. (Psst, FreshCo has an incredible offering of international foods, particularly South Asian ingredients).

But I didn’t make samosas or dhoklas. Or Hyderabad biryani or Kerala egg curry. I simply tucked away those class recipes because without Jasjit beside me to guide me, I felt like I couldn’t do it. Now I have Meera. And since Made in India landed on my doorstep earlier this fall, I’ve been turning to it with such regularity that the daily dal has become part of my weekday lunch repertoire.

The eggplant and cherry tomato curry carried me through the last of both those harvests. Pav bhaji, served up like Indian Sloppy Joes, has been earmarked as one to make again given many of the ingredients are standards in my winter CSA basket. And the roasted cauliflower with cumin, turmeric and lemon has been the snack that’s fuelled many supper-making sessions. The recipes are an homage to Sodha’s family heritage, starting in her grandparents’ kitchen in Gujarat before they moved to Uganda, and eventually England in 1972 after iron-handed dictator Idi Amin decided one day that all Asians living under him had 90 days to get out or be killed.

Those are the influences that shape Sodha’s food story, one she’s compelled to tell to prove that Indian food’s reputation for being intimidating to the non-Indian home cook is unfair. Given her family's story and the different continents they've called home, she also proves Indian cooking's adaptability. She does it with humility and grace, though she would be within her right to say “Told you so,” at the end of the book.

It’s not just the simplicity of her recipes that set people like me straight. It’s touches like the alternative contents, which organizes recipes by whether they’re great for first-timers, vegans or mid-week meals. It’s the notes about how to make perfect rice that remind me of the tidbits Jasjit would sprinkle throughout her lessons as liberally as she’d add ghee to a hot pan. It’s the treasures like the Housekeeping chapter with instructions for DIY chai masala or how to use up every bit of leftover food in your possession. It’s the menu ideas for two, four or eight vegetarians, how to eat a meal with your hands, and pair wine with paneer. Sodha offers advice on rescuing dishes when things go awry at the stove and she shares detailed notes on ingredients ubiquitous in Indian cooking.

It’s almost like divulging what’s written in the margins of her personal cookbooks or on yellowed family recipe cards that were hastily written by a relative obliged to put into words how to put together the kachumbar they’ve made their whole life using instinct. It’s just a great book and definitely in my Top 3 of the year. As for that chickpea curry with greens, well, it’s getting a much-needed break. I’ve got other curries — and biryanis and chaats — to try.

Excerpted from Made in India: Recipes from and Indian Family Kitchen. Published by Flatiron Books. Copyright © 2015. Excerpted by permission of Raincoast Books. All rights reserved.

Peel and chop the potatoes into equal-size chunks, then boil them for around 10 minutes, or until tender. Drain, mash, then set aside.

Put the butter into a wide-bottomed, lidded frying pan on medium heat. When it starts to foam, add the onions and cook for 8 to 10 minutes, until golden. Add the garlic and ginger, and stir well. After a minute, add the eggplants to the pan and cover. Stir them every now and then until they're soft — this should take around 10 minutes. Add the strained tomatoes and tomato paste, and cook for around 5 to 7 minutes until it is a thick mash, rich and dark red.

Add the cumin, coriander, garam nasal, and turmeric, the amchur if using, and the salt. Stir and taste, adding the chili powder if you'd like more heat. Finally, add the mashed potato and cauliflower. Stir to mix and put the lid on, leaving it to cook for around 10 minutes or until soft.

Taste and adjust the seasoning. Transfer to a bowl and use a potato masher or a fork to mash it. The consistency should be somewhere between mashed potato and thick pasta sauce — you can add some hot water to loosen the bhaji if need be. For a final flourish, add a generous pat of butter and stir it in.

Serve with halved and toasted bread rolls, generously spread with butter. Put a layer of pav bhaji in the middle of each roll, and top with a sprinkling of red onion, cilantro, and a squeeze of lemon juice.