The Eating Niagara December listicle: A few of my favourite things 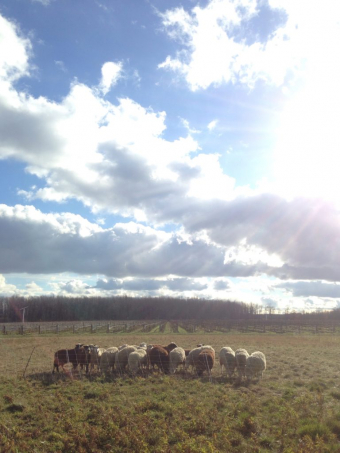 My notebooks abound with all kinds of bits and pieces of information. It's not enough to warrant a standalone post but still worth more than a simple tweet with a shelf life of 30 seconds. So, I’m starting the Eating Niagara Listicle, an occasional roundup of all things that might be of interest. And if they’re not, well, I’ll just watch and weep as my bounce rate goes up. So without further ado, the listicle.

She played upon a ladle

I was always certain the soup I made was boss, therefore making me a soup boss. But then I read this recipe and realized, nope, I am still a soup minion. Everything about this kimchi jjigae by Niagara’s own Tara O’Brady looks and sounds flavourful and healthful. It’s packed with some of my favourite foods: kimchi, gochujang, tofu, shiitakes. A vegetarian version of this beauty is going to be a fixture in my soup bowl this winter.

The sheep at Southbrook Vineyards, one of our stops on our Taste the Season tour

One of my favourite activities is playing tourist here at home. One of my favourite ways of doing it is with a seasonal passport for local wineries offering tipple and food pairings. If this sounds too touristy for you, dear local, it’s not. It’s an incredible way to experience wineries you may have never visited.

Mostly though, these events are a great way of supporting our local vintners during those shoulder seasons bookending high-traffic times when tourists from outside Niagara are more inclined to while away their free time here. Let’s face it, this time of year isn’t exactly a calling card for anywhere, so our wineries, restaurants and other hospitality types rely on residents to help them through the lull. Wineries of Niagara-on-the-Lake hosted its Taste the Season passport event in November and I made the rounds with my mom.

Given I’m vegetarian, there were only a handful of pairings I could enjoy (thanks to those wineries thinking of us herbivores and a note to the rest: us herbivores like wine, too!). But it was a great afternoon of mother-daughter bonding. As with anything, there were those stops that put in an incredible effort — I’m looking at you Peller Estates, with your butternut squash, shiitake mushroom and basil pesto flatbread. And there were those that didn’t, like the stop that served a glob of goat cheese in a crust pulled from a box.

Still, I discovered a really tasty Chenin Blanc at a winery I’ve only ever driven past. It was at Joseph’s Estate Winery, one I’d written off during my early days in the region after being gifted an unremarkable Gewürztraminer from there. Well, it won me back with the 2009 Chenin Blanc (drink it now if you buy a bottle). And Taste the Season, along with its sister event, Sip and Sizzle in May, wins me with the opportunity to get out and try something new.* *I was given a pair of complimentary passes to Taste the Season by the Wineries of Niagara-on-the-Lake. I was not obligated to write about the experience, however, nor did the organization have any input in what I chose to write about it.

Gift ideas for the gourmand in your life.

Gift guides abound right now. I wrote mine for my column this week. There is less food on it this year than last, though it still has plenty of edibles.

It was about the enduring this year: local experiences and products built to last. But if you’re looking for gifts to sink your teeth into, last year’s list is still relevant.

Until a few weeks ago, I’d only been hearing about the flourishing and diverse food scene evolving at rapid-fire pace in Hamilton. I watch the tweets come equally as fast from those seeking comestible thrills as they sample bespoke dishes at the newest additions to Steeltown’s dining landscape.

Then I was invited to join them. I got to tag along on a food tour hosted by Hamilton’s economic development department. The point of the tours is to generate buzz about what’s happening in the city. With new eateries opening so quickly and in such abundance, everyone wants to see them succeed, so the hope is inviting a few food lovers with great data plans on a 12-hour tour might help. The-paint-is-barely-dry new describes most of the places at which we noshed. One wasn’t even officially open yet when we were seated and treated to charcuterie and, in my case, coconut vegetable curry. I wrote about some of the stops for The Culture Trip, but one place that really won me over and didn’t fit the description above was Papa Leo’s, a breakfast and lunch joint on Concession Street.

If I lived in Hamilton, this would be my place. My Saturday morning destination to fuel up for the day ahead. The bread pudding French toast with blue cheese and maple syrup had me at the first bite and owner Leo Santos’s humility just had me. He arrived in the city after a stint out west and thought Hamilton’s brunch scene was lacking beyond the usual bacon and eggs. So he stepped in to help it. Lucky #HamOnt. Even luckier, this five-year-old eatery is planning to expand to include dinner service next spring. Better still that Santos sources locally as much as he can. And he gets another thumb up from me for best re-use of milk bottles.

This place reminds me of a favourite sweater: comfortable, unpretentious and warm. And every time you put it on — just like every time you eat here — you know it’s the best decision you’ll make all day.

I will be a Foodiot no more. I now know what schmeat is (in vitro meat grown in a laboratory) though I’ll never eat it. I also have plenty of other morsels of knowledge to chew on, which will bode well for me the next time I play Trivial Pursuit. To what do I owe this bounty of facts? Eatymology: The Dictionary of Modern Gastronomy by Josh Friedland ($17.95 Sourcebooks). Many of us know him for the creation of the satirical Twitter mash-up of Ruth Reichl and Anthony Bourdain, @RuthBourdain.

Now we know him for writing the dictionary defining all the food words you probably didn’t know existed. Friedland brings the same humour from Twitter to this book, which explains 100 new food words such as crinchy, an industry term for a snack food with a texture somewhere between crisp and crunchy; urge surfing, which is a technique based on mindfulness to ride out a food craving without giving in; and locapour, a person who only consumes beer, wine and spirits made locally.

More than just a good laugh, it’s a glimpse of current food culture and a case study of our need to create words to describe new tastes and sensations related to food. Niagara even gets a mention somewhere in the book (somewhere was your hint). Some anthropologist is going to have a heyday with this. While I don’t expect there will be any cow-pooling in my future (joining my friends in the purchase of a side of beef), I am considering a career as a vegetable butcher, which is exactly how it sounds. Want to win a copy of Eatymology?

Just enter the draw below. The winner will be expected to answer a skill-testing question, but as always, I’ll go easy on you because I’m no mathematician myself and don’t want to be a killjoy with the BEDMAS. Thanks to Raincoast Books for providing a copy to give away. a Rafflecopter giveaway