Cheering on the culinary misfits 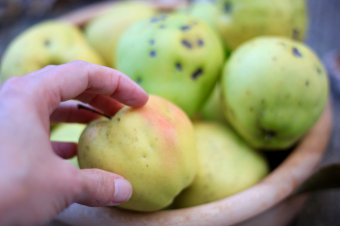 Food waste is a huge social and environmental issue throughout the world. Here's how a few culinary misfits are combatting this incredible problem.

I took a roadie with some unlikely travel companions a few weeks ago.

It was 200 pounds of Kieffer and Bartlett pears bound for Great Lakes Beer in The Big Smoke. The Kieffers were rescued Thanksgiving weekend, their fate to become compost were it not for a small group of volunteers who gave up their time to harvest them. The Bartletts were seconds from Torrie Warner’s Beamsville farm; more knobby and scuffed than some of their relatives who fetch a higher price at market with their flawless appearance.

I made the trip with mixed feelings: excitement for what was to become of these pears — the castoffs of the fruit world — but also feeling a little guilty. Two hundred pounds is a lot of pears and someone would have to chop and freeze them to use next spring to make the second — and larger edition — of Great Lakes’ Kieffer Your Hands Off My Pears saison. I only hope Great Lakes has an intern or two.

The beer is an experimental brew that Great Lakes took a gamble on last year at my behest and it worked on a small scale. This year, the brewery is making more of it. And I am honoured.

I thought I’d be delivering only a few bushels of pears to the local food bank when I started the Garden of Eating - Niagara in 2009 with the goal of keeping good food from being wasted by diverting it to people who could enjoy it. But over the years, I’ve been fortunate to have people in high places see the potential in a heritage pear that farmers ridicule for its tough, gritty texture and its unceremonious fall from grace as a bona fide Niagara crop. (Apparently communists and prisoners stopped eating them.) Now relegated to a few boulevard trees or a pesticide barrier in farm environmental plans, the Kieffer pear, in particular, has gone on to lead an unglamorous existence.

I really started to see the promise they held when chef-teacher Mike Gretzinger stepped up to take our Kieffer harvests to turn into something palatable for food banks. Then when Great Lakes bought into the idea by making beer with them, I felt like unwanted urban tree fruit had finally made it.

Truth be told, I love all the love that seconds are getting everywhere these days. How perfect is it that a major grocery chain, Loblaw, has embraced the imperfect and sells smaller, slightly misshapen and blemished fruit, even leveraging its flaws in the marketing of it. The seconds they offer are my first choice. They’re perfectly sized for toddler hands, and my daughter devours them. My juicer also makes short work of them, giving me their sweet essence in exchange.

Some golden delicious apples rescued by The Garden of Eating - Niagara.

I marvel at the photos posted by @UglyFruitandVeg on Twitter. Mother Nature shows her sense of humour and artistry in all that crooked and contorted produce. And I was even more buoyed by lumpy, bumpy fruits and vegetables doing all the things their picture-perfect relatives can do — with a little help — in the kitchen of a unique Berlin restaurant called Culinary Misfits, profiled in Girl Eat World, a documentary series airing Monday nights at 9 and 9:30 p.m. on TVO.

The travelogue, hosted by South African Master Chef winner Kamini Pather, is food for thought and the eyes. She travels the globe immersing herself in the local food culture of every place she visits. It’s part of some really intelligent discourse TVO is starting with The Food Chain, a multi-platform series that also includes its current affairs show, The Agenda with Steve Paikin, and a website sharing important stories about the societal, political and economic impacts of what we eat, where it comes from and how it winds up on our dinner table.

I love what The Food Chain is serving up because it digs deeper than showing trendy food experiences that I sometimes feel verge on satire. It sparks the kind of discussion I’m hungry for in a world obsessed with what everyone is eating.
And at Culinary Misfits, kinked carrots, potholed potatoes, and even stale bread are given makeovers with some slicing and dicing. They’re turned into something that tastes exciting and has me longing for another trip to Germany sooner than later. No one can tell the ingredients in the dumplings with vegetable stew and purple potatoes that Culinary Misfits serves were once on the reject pile, bound to be tilled under or tossed. I can’t help but think that meal would pair well with a Kieffer pear saison.

More than half of all food grown in Europe never makes it to market because it doesn’t look the part. In Canada, we waste 40 per cent of our food, with aesthetics being a key driver behind it. So I love that Culinary Misfits, Mike Gretzinger and Great Lakes Beer are making sustainable eating and drinking the norm — cool, even. I raise a tall cold one of pear beer to each of them.

Now if only I could convince a chef at one our white linen establishments to take all those crab apples that litter my street every fall… .
Are you an urban gleaner? Prefer the heart-shaped plum to the oval one? I’d love to hear how you give the pariahs of the produce world a prominent place on your plate.