Five hours, five breweries and one toddler: A taste of Buffalo craft beer 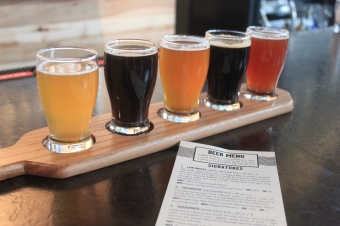 I’ve never been shy about professing my love for beer in a wine region.

I’ve made the case for an official Ale Trail in Niagara to run alongside our well-travelled wine route. While I continue waiting for beer stein road signs to share a post with those blue and white government-issued bunches of grapes, I’m going to make the case for something else: Let’s annex Buffalo. You heard me. No, this isn’t asking for a do-over of the War of 1812. It’s simply loving what I see whenever I’m across the river and wanting it for our own. (Enough Niagarans buy gas and groceries there, so really, it may as well be ours).

I’ve never been shy about naming Buffalo my big city of choice between it and that other metropolis bookending us, but these days it’s more than stunning architecture, good people and being home to the Toronto Maple Leafs of the National Football League. The city is going through an incredible renaissance and those revitalization efforts have turned the Queen City turn into a bastion of craft beer among other great things.

Not that it’s a stretch for Buffalo to be a capital of cold ones. The city was home to 35 breweries before prohibition, and although the Buffalo Billion economic plan hasn’t quite restored New York State’s second largest city to its former glory, it’s getting there. The greater Buffalo area is already home to 19 breweries and cider makers, and counting. I’m checking them off my to-do list one by one. Buffalo Beer Week — what's not to love about a city with seven days dedicated to all things hops, barley and yeast? — gave me good reason to scratch a few more off that list one afternoon earlier this month.

We hit up five breweries (in five hours with a toddler in tow!) in and around the downtown. Spoiler alert: I loved them all. Thank goodness for the 4-ounce pour, otherwise I’d still be recovering under a beer glass ring-stained table somewhere.

The name itself is a nod to the optimism of a city on the upswing, but so is Resurgence Brewing’s location in an old industrial neighbourhood-turned-destination with a Brooklyn vibe. If it weren’t for the loganberry wit or sponge candy stout, I likely never would have ventured into this corner of Buffalo, other than when taking a wrong turn to get back to the Peace Bridge.

This wasn’t my first visit to Resurgence but it was for my husband and 18-month-old daughter. Who brings a child to a brewery, you ask? Clearly lots of Buffalonians. I expected judgmental looks to flow more freely than the IPA when we walked into Resurgence’s cavernous beer hall with communal tables. What I found was giant Connect 4 and Jenga already in use by some under 5’s.

Bubble hockey and corn hole also kept kids amused while their parents sipped and noshed, though they're as much for the adults as for the minor crowd. I had a tough time rounding everybody up to move on to our next stop. Fortunately, every brewery we visited seemed to consider future suds swillers in its offerings and I was struck by the willingness to accommodate the next generation with plastic cups, root beer and games.

As for the beer at Resurgence, we sipped the HOPtoberfest, which had just the right amount of bitterness for me. I didn’t feel like I was getting drop kicked in the throat while drinking it, which sometimes happens in that craft beer arms race to be the hoppiest. We also had the WNY Fest, a Marzen made entirely with local ingredients that boasted hints of caramel and lots of grain.

Our first Community Beer Works experience happened in the most community-oriented way: at the Elmwood-Bidwell Farmers Market last spring when we sprung for a growler of That IPA. The first brewery to really start Buffalo’s current craft beer movement, Community Beer Works came to be thanks to a Kickstarter campaign to turn on the taps in another former warehouse. I looked forward to checking out the headquarters of this most grassroots endeavour. The tasting room is small and the seating is limited, but there was a heady selection of brews with broad appeal.

We sampled the IPA, APA, Schwarzbier, and the Hoppy Porter while making friends with other out-of-towners. The Hoppy Porter was the standout for me. I love a good dark beer but this one packed a surprising bitter punch compared to the usual chocolatey porter that tends toward the sweet. The  Schwarzbier was the runner up with its smoky, almost meaty aroma. Just what you’d expect a vegetarian to love, right?

This is the every man’s brewery. Both times I’ve visited I’ve been struck by the mix of people packing this place: suits to students; twenty-somethings to boomers and beyond; hipsters to, well, us with our toddler. It’s crowded, it’s cavernous and it’s loud. But the pretzels are hot and the beer is cold, so Big Ditch, a name that’s a nod to the Erie Canal which once ran through Buffalo, nails it, really.

President and co-founder Matt Kahn gave me the scoop on Buffalo as Beer City, telling me about the 35 breweries that kept Buffalonians hydrated pre-prohibition. Once kegs were (legally) tapped again, the city went decades drinking the likes of Bud and those other big brands until 1997 when downtown watering hole Pearl Street Grill and Brewery started serving its in-house brews. (I’ll rumble with you for a pint of Pearl Street's Street Brawler stout).

In 2000, Flying Bison Brewing became the city’s second craft brewery. Call it a mini brewery boom but things dried up until Community Beer Works’ Kickstarter campaign in 2012. Kahn and his two business partners caught on to a shovel-ready opportunity east of the iconic Electric Tower about a year ago when they started Big Ditch in a former Verizon service centre. They were tipped off to the potential of this part of downtown Buffalo, typically bypassed unless you had an issue with your cell phone, when trendy eateries Tappo and Oshun opened their doors. Kahn took it as a sign to put a stake in the ground.

The old mobile phone hub served as a distribution centre for Big Ditch brews before it was expanded to add a tap room last spring. Rather than compete with neighbouring restaurants, Kahn and crew decided to complement the offerings by sticking to casual upscale gastropub fare. With a line-up for a table when we got there, Buffalonians seem to appreciate this spirit of co-operation.

I appreciated the hot pretzels and flight of beer. The standouts for me: a seasonal blonde peach made with western New York peaches and the flagship Excavator rye brown ale. Two bottoms up to Big Ditch for putting fall on tap with a cinnamon apple amber ale that was more spicy than sweet. Perfect, really.

This is another brewery that’s a nod to the new Buffalo. Flying Bison moved about a year ago from Riverside to its shiny new digs in Larkinville, a Buffalo neighbourhood that’s getting as gussied as the downtown it abuts. You know you’ve made it to this suds shrine when you reach the chestnut tree at the end of the parking lot.

The tree is beacon of beer halls in Germany, and now in Buffalo. Flying Bison was the city’s first standalone distributing brewery in 87 years when it opened in 2000. It celebrated its 15th anniversary in May and today, it’s a calling card for those up for a pint and a game of Trivial Pursuit.

My husband and daughter split a root beer while lush me had a 4-ounce Aviator Red Irish ale and the Bisonfest Oktoberfest lager made with yeast from the Weihanstefaner brewery in Munich. I loved them both — the Aviator Red, which started it all for Flying Bison, for its rich malt flavour, and the Bisonfest for its boozy sweetness.

My daughter loved this place for the shelf brimming with board games and colouring books. Affirming that ‘All are welcome’ approach, Flying Bison shared its parking lot with food trucks all summer, part of Food Truck Tuesdays in Larkin Square.

Who needs dedicated food truck festivals that charge admission (ahem, Niagara) when you have Tuesday nights in Buffalo? I’d rather spend that entry fee on beer, personally.

The first time we ventured into Old First Ward four years ago, I wondered what I was getting us into. My husband was running a race there in March on my behalf after a hip flexor injury kept me from lacing up. It was cold, dreary and drizzly. Not the best way to see a neighbourhood but it was the best race I never ran. More than 4,000 people showed up and the community spirit was unlike anything we’d ever experienced.

The place instantly endeared itself to us so I was really looking forward to this stop. The same vibe we experienced then was as prevalent at Gene McCarthy’s as it was at the finish line in 2011. Picture the quintessential watering hole depicted in every movie ever set in a gritty U.S. neighbourhood and you’ve got Gene McCarthy’s, the headquarters of the year-old Old First Ward Brewing.

The place was crowded and comfortable, and both the beer and the service were off the charts. I have a new favourite place in Buffalo and a new favourite brew, the Hopster IPA. Coming from someone who tends toward stouts, porters and lagers, this is big. Old First Ward isn’t making one of those IPAs that’s so hoppy it’s like a parody of beer. It’s making a beautifully balanced, drinkable IPA. Too bad I couldn’t finish it. My toddler daughter had her fill soon after we arrived.

I look forward to returning, though. Did I mention they have a beer garden in the summer? Next time this might be a story of one brewery, five hours and one toddler.