One to tuck away

Posted Oct 16th, 2015 in Recipes, Summer Recipes, In The Kitchen 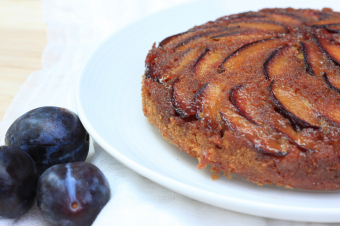 This recipe for lemony plum cake is one to tuck away for when the stone fruits come in season again. Red plums are best, but yellow and blue also work.

My heart sunk just a little bit the day I found out I was having a girl when pregnant with my daughter.

I wasn't disappointed that I would be mom to a girl. What I dreaded was being bombarded by pink and princess everything from well-meaning family and friends who got sucked into gendered marketing.

I was determined my child would come into the world knowing there was more to it than fuchsia, mauve and tiaras. So my husband and I made a pact that we would keep the sex a secret until the big day. Still, that didn't stop people from guessing based on how I carried and mostly what I craved to eat. It was sandwiches to start but then it was citrus everything.

I guzzled gallons of lemonade; my thirst for it unquenchable. Oranges and grapefruits were purchased by the sackful. Thank goodness I was pregnant over the winter so I could gorge on the California editions, which trump the Florida and South African versions, according to my humble taste buds.

"You're having a boy!" one baby pool participant wagered when I mentioned my insatiable appetite for all things tart and tangy. "I was the same way when I was pregnant with my son."

A coworker had her money on a girl. Old wives tales peg such sour cravings as an indicator of sugar, spice and all things nice in one's future. Whatever the case, my love for lemons in particular wasn't unusual, though the amount of lemon everything I ingested while pregnant would have been deemed excessive in any other circumstance.

Truth is, in a battle between chocolate and lemons, I always tend toward the tart, which is why Carla Snyder’s homage to them and their pulpy relatives, Sweet and Tart: 70 Irresistable Recipes with Citrus (Chronicle Books, $26.95), was an easy addition to make to my cookbook collection.

OK, the stunning cover, shot by Nicole Franzen, whom I voyeuristically follow on Instagram, may have also had something to do with my choice, but any volume that takes cooking and baking with citrus, especially lemons, beyond the usual suspects of bars and meringue pie is welcome in my cookbook cupboard.

While I love the look of this book, filled with shades of yellow, orange, red, pink and green — and every other citrus-tinted colour of the rainbow — I love the feel of it, too. It’s not something I ever really think about with books, but the size of this one struck me.

It’s 70 recipes accompanied by an introduction and the tools required to bring out the best in any grapefruit, orange, lemon or lime. At a mere seven chapters and 175 pages, it feels good in my hands, comfortable and with just the right amount of heft. It’s a book I could pull off the shelf easily with one hand for a quick reference without having to stop stirring with the other as I make orange curd.

It also makes this book stand out and up to all the other citrus-themed books that have been squeezed onto store shelves this year. Not sure why this was the year of the pucker, but it clearly was. Snyder’s is the winner for me for its simplicity.

The Basics chapter will be one I refer to regularly with its simple instructions for staples including curds, chocolate dipped candied peels, and lemon syrup with lemongrass. Chilled and frozen desserts will be my go-to next summer, with the chapters on bars and cookies; pastries, cobblers, tarts and pies; cakes; muffins, scones and breakfast bread to carry me through until then.

Even better that citrus, one of the few things we don’t grow in Niagara, shares its spotlight in so many recipes with the stone fruit and berries for which we’re known. I look forward to lemon pain perdu with plum compote when the season again allows for more trips to farm stands creaking under the weight of abundant fruit harvests. There’s also the meyer lemon and blackberry ice for when the temperature is verging on suffocating (an ice cream maker is my next kitchen gadget, mark my words). Nectarine and berry crisp with lemon verbena is also getting bookmarked.

In each of the recipes, many of them stunningly beautiful, Snyder is spare with the flowery language. This book and its recipes are straightforward and to the point, much like citrus itself. Snyder, a James Beard-nominated cookbook author, will tell you how long it will take to make each recipe but she avoids the overkill of overly personal details about why she included this recipe or that one. For that, I love this book because as much as I appreciate stories and introspective notes when I’m giving a book prime real estate on my bed stand, I also love a volume that gives me what I need in the kitchen: clear instructions with no noise surrounding them.

The recipes — predominantly sweet with one short chapter dedicated to the savoury — mostly feature citrus as the star. But there are those where it’s simply a supporting character, showing how well the sourpusses play with other ingredients by taking them from zilch to zippy in 60 flat.

Which is more than I can say about me and getting this recipe and review posted. Much like when I was pregnant, making Snyder’s lemony plum upside-down cake seems like a lifetime ago. It was late August when plums abounded. But life got in the way of my writing: sunny vacations, deadlines and the loss of someone dear to me.

Life gave me lemons and now I’m trying to make lemonade and sell you on plum cake.

This cake, staring those royal purple Italian prune plums that segue summer into fall is one to tuck away until the next plum season. If you really can’t wait, and I can understand your impatience because this cake is as easy on the taste buds as it is the eyes — moist yet light, bright yet rich in flavour — you can still find plums through the Niagara Local Food Co-op and Beamsville farmer Torrie Warner.

But with California citrus season — aka winter in these parts — approaching, you might just want to get this book for everything else in it and dog-ear the plum cake as reminder of what you need to do 10 months from now.

Unless of course you're pregnant and have a craving. Then nothing will be able to stop you or the girl that I’d be willing to bet you’re carrying.

From Sweet and Tart by Carla Snyder. Published by Chronicle Books. Copyright 2015. Excerpted with permission from Raincoast Books. All rights reserved.

Whisk the flour, baking powder, baking soda, and salt in a small bowl. Set aside.

Beat 6 tablespoons (85 grams) of the butter and 1/2 cup (100 grams) of the sugar in a mixer bowl on high speed until light and fluffy. Add the egg and lemon zest and beat until well-blended and creamy. Turn the speed on low and add the flour mixture and buttermilk in three additions, beginning with flour and ending with the buttermilk, beating until smooth. Beat in the vanilla. Set aside the batter.

Melt the remaining 2 tablespoons butter in a 9-inch (23-centimetre) round cake pan over medium heat. Add the remaining 1/4 cup (50 grams) of sugar and cook, stirring, for about 2 minutes. It doesn’t need to be brown but should be bubbly. Carefully remove the pan from the heat and spread the melted sugar evenly over the bottom of the pan.

Working from the centre to the outside, arrange the plum slices in a decorative pattern, overlapping them slightly. Sprinkle with lemon juice. Return the pan to medium heat and cook undisturbed for 4 minutes or until the juices bubble up and around the plums. Turn down the heat if needed to keep the fruit from browning. Remove the pan from heat.

Carefully and evenly spoon the batter over the fruit slices (try not to disturb their placement). Bake for 25 minutes or until a wooden skewer inserted into the centre comes out clean. Let cool in the pan on a wire rack for 10 minutes (no more, or it might stick), then invert the cake onto a serving plate.

Store, covered, at room temperature for up to 24 hours.