Posted Sep 17th, 2015 in Recipes, Summer Recipes, In The Kitchen 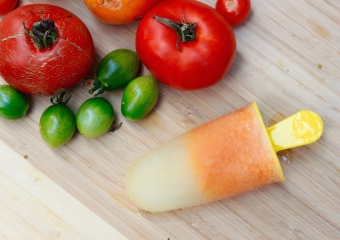 Got greebly tomatoes? Don't throw them on the compost heap. Mix them with fresh-squeezed orange juice and lime, and enjoy tomato paletas.

The yellow police tape around my community garden has been removed.

That's given me the green light to return to my trusty patch of dirt where I can grumble to my bug-eaten kale about the weeds, curse my insect-chewed greens to the apple tree nearby, and wince at tomato plants that look like the inspiration for a B-Movie horror flick villain.

It wasn't long after my lament at being cut off from the garden because of a fire investigation that we all got the go-ahead to return. But what made me flinch more than coming back to gnarly plants was the gaping hole cut into the church’s roof by flames and firefighters’ axes.

The gravel parking lot was full of cars my first day at the garden post-fire. I wedged my Echo among them and took my place at my messy raised bed just as people began trickling from the damaged building in a procession that reminded me of a funeral.

I could only guess they were former parishioners coming to see the destruction, to mourn together what happened to their place of solace and reflection, and — I hope — not try too hard to understand why anyone would have tried to set their sanctuary alight.

Some hugged once outside. Others waved as they made their way to their cars. Most just left quietly except for two men who walked to the edge of the parking lot to scan the garden. They spoke in hushed tones, turning to each other then back to the garden.

I swear I saw disapproval flash in their eyes. Maybe it was suspicion. After all, they had no idea who had borrowed their church’s land for the season and whether fire compelled them as much as growing burly zucchini.

What I could be certain of, however, was the shame I felt at my unkempt plot. It was the insult on top of a painful injury, of that I was sure.

Tomato vines that should have been staked in July were tangled together like the tentacles of a physically unco-ordinated octopus. They flopped over, floundering in grass that hadn’t been cut in weeks because a much too kind groundskeeper made a wide berth around them to spare them the mower blade.

And then there were those weeds. In any other yard, they were a bylaw infraction waiting to happen; the kind of situation that would make my neighbours hate me. I buried my head a little deeper in my grody kale until the men finally drove off. But my guilt didn’t leave with them.

There were vegetables on the brink. Food was about to go to waste, like those tomatoes that were stuck for days on the wrong side of police tape and had fallen from the vine to rot on a dirt grave. I scooped up a few pathetic hillbilly potato leaf maters, pock-marked by opportunistic fruit flies. I was determined to salvage them somehow as I set them aside to spend the next hour carefully untangling tomato vines and staking them with the zeal of someone who had resolved to no longer be that gardener.

I gladly passed the torch on to the person with collard greens the size of canoe paddles spilling sloppily over the side of their bed. I would no longer be the reason for the emails from our garden co-ordinator to please (please, please!) clean up our plots already. And I would no longer leave tomatoes on my vine too long.

Still, what to do with those I had rescued from hungry fruit flies? Carefully carving out the bad bits and blitzing what was left in some sort of kitchen gadget seemed the most dignified end for them.

So I introduced them to my juicer, some oranges, lime juice and simple syrup. Suddenly my tomatoes were no longer the pathetic creatures I found fading into the dirt of my plot. They shone with the help of their citrusy and sweet companions.

They became sophisticated, even. So much so that I put the concoction in an ice pop mould and decided these would not be popsicles but rather, paletas, said in my best Sofía Vergara voice, which belied the subtly of their flavour. And their unglamorous origins behind yellow police tape.

Dutchbaby may just be one of the easiest breakfasts going. It can be made sweet or savoury (dinner!) but this one was made sweet for breakfast. It was inspired by what I had in my fridge and a recipe from the Love and Lemons cookbook by Jeanine Donofrio.

In a medium bowl, whisk the eggs and milk.

In a separate bowl, mix the flour, salt and cinnamon until well-combined.

Combine wet and dry ingredients and add half the blueberries. Give a quick stir to mix them in.

Remove the skillet from the oven and add the coconut oil, swishing it around until it's melted and coating the bottom of the pan.

Pour the batter into the centre of the hot skillet and return to oven. Bake until the Dutch baby is golden brown and puffy, about 12 to 15 minutes. (The edges will puff higher than the centre while in the oven.)

Cut Dutch baby like a pie and serve immediately.

Even though this recipe uses blueberry, feel free to swap in other seasonal fruit, such as apples. The pancake is a blank slate that goes with anything.

I put my measured amount of powdered sugar into a fine-mesh sieve and tap the edge against the palm of my hand to give an even and lump-free dusting of sugar.