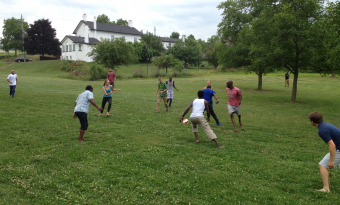 There is no worse feeling in sports than when your wicket drops.

There are no second chances in cricket. When you are deemed ‘out’, you are permanently out of the game. To add insult to injury, you have the long walk off the pitch to contemplate your failure while everyone around you celebrates your misfortune. Why then would someone willingly confront such agony on a weekly basis? Because, in spite of its capacity to provide moments of lamentation, the sport also brings people together and encourages community beyond what could be gained in mere outreach. As a regular participant in the Southridge Community Church cricket games that take place each Sunday in July, I have learned not only the game of cricket but also the passion and flare that it evokes in the Caribbean gentleman with whom I play. As a person who had never guarded a wicket before, I was welcomed into the fold of cricket playing gentleman, and slowly began to grasp some of the more subtle parts of the game. In learning these concepts I also gained insight into the lives of the men with whom I played.

Some of the players. Photo from Southridge Community Church

Caribbean workers in Niagara often spend as much as eight months away from their families. This requires the characteristics of bravery and patience. These same traits show up regularly on the field of play. It is not uncommon for the men to make bold running plays in an effort to secure an extra point. It is similarly common for them to wait several balls for the perfect shot to gain six runs all at once. The game also encourages teamwork. The same teamwork that is seen in groups of men working long hot days picking the fruit of the region shows up around the wicket as defensive schemes and trick plays are hatched. Most of all however, it is the hospitality the men bring from their own countries that shines each Sunday night. I encountered this hospitality when I made my first farm visit two years ago. Though a complete outsider, I was welcomed into the house, offered a cool drink and quickly learned the rules to cricket. Fast-forward two years, it is this same attitude that welcomes children and first-timers to the field on Sundays.

A jerk chicken feast is one of the highlights of cricket night. Photo from Southridge Community Church.

I love to participate in sports but have little tolerance for the petty bickering and underhanded tactics that can infiltrate even the most friendly looking local leagues. This is the most heartening part of cricket night. There is no bickering, just friendly banter and a desire to teach the game to others. After a long week of helping produce the fruit that contributes so largely to the region’s economy, our Caribbean friends still save energy to teach anyone willing to try the fundamentals of the game that they love. With this, we learn not only the skills of the game but also the commitment to friendship, hard work, and most of all family that drives the men to come back and work in Niagara each year. Written by Doug Hunt Part two of a two-part series.  Southridge is hosting a Caribbean workers harvest dinner on Sept. 26 from 6:30 to 8:30 p.m.