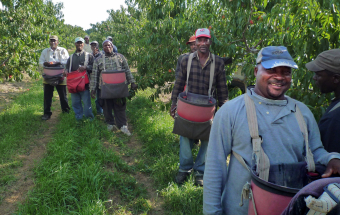 In them, faces beam out at the viewer: middle school-aged students wear caps and gowns to mark the successful end of a school year; three women, dressed up, gather on an armchair, a baby between them; and a man in worn work clothes, his face weathered by time, stands in a snowy Niagara orchard. They're perfect fodder for a family photo album, if people were still inclined to keep one. Instead, they'll be part of an exhibit Andres is organizing to educate Niagara residents about the 2,600 men and women who come from the Caribbean and Mexico every spring to work in Niagara's orchards, vineyards, and greenhouses for up to eight months a year. The photos were taken by some of those workers to show their lives here and in their homelands; the families who make do during their long annual absences and the households sustained by their income earned abroad. Andres, who operates a bed-and-breakfast in Niagara-on-the-Lake, displays the images to show Niagarans that those working on our farms as part of the Seasonal Agricultural Workers Program (SAWP) are valued members of their communities back home. She does it with the hope that people viewing the photos will make those workers feel equally appreciated here. “Our mission, it's a simple one,” Andres says. “It's to thank and welcome them, and you're raising the profile of people who are essentially invisible.” For nearly fifty years, SAWP has brought thousands of foreign labourers to Niagara to prune fruit trees and vines, harvest crops, and do the work on farms that Canadians have long eschewed doing themselves. But in shunning that work and becoming more disconnected with how food makes it onto our plates, many locals have also steered clear of the migrants filling that labour void. For years, Andres was one of those people. She was told the workers were dangerous, the gulf of misunderstanding between labourer and local made wider with every word of Patois or Spanish overheard in grocery store aisles and bank line-ups. Andres changed her tune in 2005 when she was invited to help with the music at a non-denominational church service for the workers. She stuck around for coffee with the men and women in attendance and woke up to the fact that she had been missing out on great friendships. Since that coffee klatch ten years ago, she has made a point of regaling her B&B guests with stories of her friends' hard work, which keeps us fed. She invites workers for dinner at her home to celebrate holidays when it doesn't conflict with their jobs. She drives them to medical appointments and has lobbied for sick and injured workers to receive treatment in Canada that they couldn't access in their home countries. When those illnesses and injuries keep someone from returning to work in Niagara, Andres will raise money to make up for the lost paycheque. In the off-season, she collects warm clothes so that workers who arrive before the snow melts can cope with the cold. With the permission of farmers, she'll deliver coats, boots, and hoodies with a meal to say “Welcome back, we're glad you're here.” “This isn't part of an official event,” Andres explains. “It's just part of what I do as a neighbour. I know how long these guys have travelled. Just to have soup and sandwiches waiting for them means a lot.” Her efforts to make Niagara more inclusive culminate with a workers welcome concert each spring. Farmers and employees are invited to kick off another growing season with music and official greetings from Niagara-on-the-Lake's Lord Mayor. Come winter, Andres often visits her friends in their homeland where she can practise her Patois, now like her second tongue.

As much as she has tried to make the workers feel a part of her community, isolation and exclusion remain issues for many. The stories are plentiful and heart-wrenching, like the one about a “big, soft galoot” of a worker she found grieving alone one night in a garage on the farm where he worked. Thirteen recently became a father and he missed his child terribly. He was trying to deal with his sadness alone because, as Andres explains, workers are reluctant to open up to each other. They don't want to bring the others down, even if they can relate, so they bury their feelings as they work and seek seclusion when they can no longer hide their emotions. “Their lives are just really in limbo in Canada and at home…. In some cases, they're deeply rooted and they're also deeply transient because they have to go where the work is,” Andres explains. “To take the time out to talk to them about their families would go a long way. Dealing with isolation and loneliness is key because it's definitely a threat to their health.” Then there's the story of another worker, who was out shopping with Andres when bad weather allowed him a few hours off work. That's when he got a panicked phone call on his cell phone from his wife in Jamaica. The car wouldn't start and she had to get her son to school to write his exam.

A scene from the annual Workers Welcome Concert, founded by Jane Andres, at Orchard Park Church in Niagara-on-the-Lake. Photo by Joel Hannigan.

The man calmly walked his wife through what to do, and as luck would have it, the car started. Had he been at work, the story would have had a different ending. "He looked at me and gave a huge sigh of relief," Andres recalls. "If he had been at work, the cell would have been turned off and his son would have missed his exam. When you live up in the mountains you can't just catch a bus to the school 10 kilometres away. SAWP launched in 1966 to provide Canadian fruit and vegetable growers with a reliable workforce. Niagara farmer Harold Smith was instrumental in initiating the program after trying to run his Vineland fruit farm year after year without knowing each day whether he would have enough help to assist with the work he couldn't do alone. Smith, who vacationed each winter in Jamaica, noticed unemployment was high there, so he began a campaign to bring those needing work to Canada. While other types of farming can be done with machinery and minimal human intervention, growing fruits and vegetables still requires a human touch because of the fragility of the crops. The saying goes “Thank a farmer,” but we wouldn't be able to enjoy a Niagara peach or a glass of wine if it weren't for the seasonal farm worker, as well. The money workers earn here supports their families back home and provides opportunities to their children that might otherwise elude them, namely an education. That dependence on a paycheque they couldn't earn at home has made the program a lightning rod among academics and labour unions, who see SAWP merely as exploitation, with few checks and balances to protect workers. While there have been cases of worker mistreatment, farmers doing so lose access to the program. Today, the program, which brings about 17,000 workers to Ontario, is administered by Foreign Agricultural Resource Management Services (FARMS). Ken Forth, who grows 250 acres of broccoli outside of Hamilton, oversees FARMS and has a team of seasonal workers who help him every year. He applauds what Andres does but doesn't agree that workers feel isolated, thanks to the Internet and cell phones. Many farmers also organize events, such as soccer tournaments, for their hired help or they invite  employees to major family milestones. Forth had his work crew at his wedding a few years ago. He has a beer with his team regularly “to shoot the shit.” That's why he gets downright angry that anyone might think the workers are people to avoid. “These guys are good guys and anyone who thinks they're dangerous is just plain wrong,” Forth emphatically states. “Whether Mexican or Caribbean, 99 percent are really good people who come here to enhance the lives of their families.” Still, Andres’s efforts to create more welcoming communities for the workers are spreading. Tim Arnold, outreach pastor at Southridge Community Church, connected with Andres three years ago, after Southridge opened a church in Vineland, in west Niagara. Community outreach is a large part of Southridge's mandate, so after speaking with local politicians and residents, the church community decided to launch programs that would benefit migrant workers. Andres provided insight into labourers’ needs and connected Arnold with a Vineland resident who has befriended many of the men and women. Arnold knew nothing of their plight until then. “You see these guys biking by all the time, you see them in grocery stores, but I didn't really know anything about them,” he explains. Now, about two hundred of the church's three hundred parishioners help to deliver welcome kits packed with travel cups, mittens, and towels to the workers every spring. They organize weekly cricket and soccer matches on a makeshift field behind the church, the games followed by a jerk chicken feast.

The church also hosts evening health clinics, with doctors and nurses on hand to treat workers. A mobile bike clinic, equipped with tools, makes the rounds to local farms so workers can keep their wheels road-ready through the summer. Then there are the personal visits that parishioners make to the farms with their families to spend an evening with friends. “It's been so much fun. The men are so appreciative,” Arnold notes. "The workers say that for the first time ever, they can go to [the grocery store] and people know their names. It's being recognized and acknowledged that's made a world of difference.” And yet, there are those who still cling to their long-held beliefs about the workers. Andres admits she hasn't been able to change the minds of everyone who may have warned her to be wary rather than welcoming. “Why is it so challenging to include people?” she asks. “Once you get involved, you get hooked because of the relationships. That's what it's about.” Part one of a two-part series