Posted Aug 25th, 2015 in Recipes, Summer Recipes, In The Kitchen 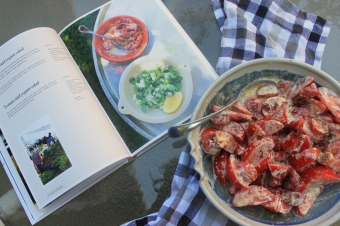 This simple tomato salad with yogurt and sumac from Eat Istanbul by Andy Harris is quick to make and requires minimal ingredients.

I woke up Saturday morning to an email telling me my community garden was closed until further notice. My prolific plot that has kept me in more kale than I ever thought possible is behind a vacated church that was set on fire late last week. To say this is a bummer is beyond an understatement and almost as unnecessary as pointing out the sky is blue. Alas, it is what it is — a jut-your-bottom-lip-out D-R-A-G. Last time I saw my tiny patch of dirt a few days before the bad news, there were tomatoes on the verge of being fully ripe and ready for picking. And now that I’m living a freelancer’s life, I was looking forward to having the time between interviews and columns to go fetch them and yank a few weeds in the process. After all, I now work for the coolest boss ever who would let me take an extra long lunch to do these sorts of things. The dog days of the season are here and I know this by the amount of tomatoes I’ve been eating. While I’ve been having problems keeping up with my kale, I never have an issue staying on top of my tomatoes.

I recently posted a photo on Instagram of a heaping bowl of the easiest tomato salad with the caption ‘Give us this day our daily tomato salad.’ That wasn’t me trying to be clever. I really am eating tomatoes in some kind of salad form at least once every 24 hours. The simplest of those comes compliments of Andy Harris and David Loftus’s book Eat Istanbul: A Journey to the Heart of Turkish Cuisine (Quadrille/Raincoast Books, $39.95). Since landing on my doorstep a couple of weeks ago, I’ve been eating it from its pages regularly. There have been chickpea wraps with grilled tomato, onion, parsley and sumac salad. And that clean-your-vegetable-crisper-bare dish, Türlü, which is a baked Turkish ratatouille packed with the season’s largess of eggplant, zucchini, peppers, tomatoes, and potatoes. I plan to wake early in the morning to put together a pot of Mercimek çorbasi, a.k.a. red lentil and bulgur soup, for my girl’s lunch at daycare. I have my eye on other recipes as well, though those with tomatoes as the star now have to wait for a police investigation to wrap up. I should mention I also feel validated by all mentions of purslane — that weed that put a strain on a friendship during my backyard-sharing days a few years ago. It’s a staple of the Turkish diet and Harris and Loftus affirmed for me that I am not alone in eating the stuff, or encouraging others to do it, too. I always knew I liked Turkey. For years, it and Vienna held prime real estate on my travel to-do list. So when my husband (then to-be) and I went to Germany seven years ago to visit family, I was determined to get one of those checked off said list. Vienna was only a seven-hour train ride away in neighbouring Austria. Getting a ticket and finding a hotel once we got there seemed easy enough. I was a fly-by-the-seat-of-my-pants kind of traveller back then and it always worked out well. Too bad one of my more rigid German relatives didn’t get my travel logic. She also unabashedly hated Vienna, something I did not know was possible. A seven-hour train ride was too far, she told me. So every day at breakfast, she’d hit play on her message track about how it was unfathomable to come all that way without train tickets and hotels booked, and a firm plan in place. And every day, she’d show us the latest deals sent by a travel agent friend. She’d beg us to book a rock-solid itinerary already. My reassurances that we’d be fine winging it only fuelled her efforts to find more all-inclusive packages to anywhere but Austria.

One morning, I arrived at the breakfast table to find her laptop open to travel options for Turkey. This time, there was no protest from me. Tickets were booked and next thing I knew, we weren’t on a seven-hour train trip to a neighbouring country. We were on a three-and-a-half hour plane ride to the neighbouring continent, bound for Turkey’s Mediterranean coast for five days.

We stayed in Side, a stifling hot and humid resort town where you could find fresh-squeezed pomegranate juice on most corners, served out of a proper juice glass, with a rickety chair and table set up as a makeshift café for thirsty travellers to take a load off while they sipped. It’s where I saw my first real, live camel that wasn’t in a zoo and learned that those ships of the desert are jerks, especially to Canadian tourists exhibiting childlike glee at encountering their ornery butts. Turkey is also a street food mecca, with kebab and doner carts at virtually every second stop, broken up by walk-up windows stacked with the most ornate Turkish delight I’ve ever seen. I loved the food — the big pots of chickpeas in tomato broth at a corner café in Alanya, where the cook who made it proudly scooped some into a bowl for me. Or the rabbit’s warren of a spice market filled with locals doing their shopping, which we stumbled upon like some kind of reward after successfully navigating the maze of a Manavgat tourist bazaar filled with Ed Hardy and Chanel knockoffs. I ogled the perfect piles of saffron and biber, wishing I’d taken more Lira out of the hotel safe that morning. Turkey was more than what I had imagined. It was alive and sensual, proud and earnest. I’m reminded of that all when I thumb through Eat Istanbul, which reads as much like a travelogue as a cookbook.

With Harris’s intimate knowledge of a country that has seduced him as much as it did me, it’s like being shown around by a friend and local. He’s letting you in on Istanbul’s best haunts while Loftus’s photojournalism shows how gritty, real and beautiful each stop is. His portraiture captures a passionate people, my favourite being the full-page black and white of a butcher with a beatific grin and glint in his eye to match that of his blade, and his white uniform giving off an almost ethereal glow, save for his blood-flecked apron. The recipes are simple; the farthest thing from fussy and precious, and the accompanying photos are vibrant and hedonic. They’re platefuls of hot messes, like those chickpea wraps, that I want to dive into, casting aside forks, knives and etiquette to eat with my hands and relish in their sensuous glory. I love this book for all its earthiness. I love this book for that tomato salad, a little messy with its yogurt dressing speckled with yellow olive oil. Perfectly unfussy for summer, and ideal for when you really only feel like spending five minutes in the kitchen and rest of the time in a patio chair with a bowl of this in your lap. It’s fly-by-the-seat-of-your-pants eating. Just don’t tell my German relative.

This simple tomato salad is from From Eat Istanbul by Andy Harris and David Loftus. Published by Quadrille. Copyright 2015. Excerpted with permission of Raincoast Books. All rights reserved.

Combine well and sprinkle with sumac just before serving.