Page 208: A recipe for greens shakshuka 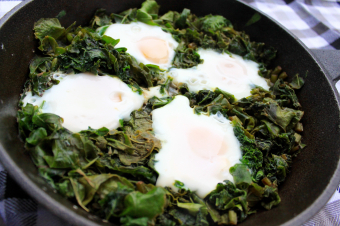 Shakshuka isn't just eggs with tomatoes. This greens shakshuka recipe shows the versatility of this dish and how good it can be with leafy greens instead.

I can feel my kidneys twinge every time I visit my community garden plot. Just the sight of those oxalic acid-packed greens — the chard, the beet tops, and to a lesser extent, the kale and spigarella — has me reliving every kidney stone I’ve ever had and feeling the ache of every future one setting in. I can’t quite bring myself to leave those greens to languish or give them all away even if it would mean a kidney-stone free future. They are among my favourite vegetables, despite what they can do to me. I just wasn’t expecting them to thrive as much as they have in my tiny plot. Which brings me to my other problem. My brain feels a similar, cramping twinge when I open my fridge and see my stockpile of harvested greens in every shade and shape. Inspiration is in short supply right now as I finish my job at the university, dig myself out from under my pile of freelance writing assignments and get pinned under a separation-anxiety suffering toddler whose favourite word is “Up,” said with arms thrust skyward to indicate indefinite clinging is imminent. The creativity and brain power needed to figure out how to use my veggie stash as efficiently — and deliciously — as possible is at a minimum. But 208 holds the answer. That’s the page of Leah Koenig’s book, Modern Jewish Cooking (Chronicle Books, $48), that contains the secret to using up those leafy greens quickly and simply. It’s the page that contains the recipe for spinach shakshuka, a meal that leaves itself open to adaptation when my kale seems to be the keener this week, or when I have a mixed bag because my greens are on a socialist bent and have grown to be ready to eat at exactly the same time.

The meaning of Shakshuka

With greens and feta, garlic scapes, lemon juice and eggs all thrown together in a cast iron skillet, my green version lives up to its name of shakshuka, which means mixed up. I can’t help but think I’m drawn to this dish as much for it being a metaphor as its pragmatic use of greens. You see, I’ve long been curious about my family history, wondering if I’m genetically predisposed to love Jewish food. I’m a mistress of the latke and I even recoil at the thought of gefilte fish, which is apparently a very Jewish thing to do, Koenig tells. Still, if there is Jewish blood pumping through these otherwise German veins, I will likely never know. Twelve disgraceful years in one nation’s history made it paramount for many people during that time to erase their own histories in order to survive. My mom, however, feels certain there’s more to our past than our very Germanic family tree lets on. And then there’s my inexplicable loyalty to latke, my almost competitive drive to perfect my potato pancake technique. Maybe I’m just overthinking things, like what to do with those greens until I remember Page 208 and that greens shakshuka. Koenig, with her spinach shakshuka recipe, is so much more than a weekday hero to me when I’m staring in my fridge, looking for dinner, yet trying so hard not to see a pile of spigarella before me. I love this book because its recipes are woven with stories that show how inseparable food, culture and place really are. It delights my inner anthropologist as much as it does the home cook version of me.

Koenig talks about Jewish ethnic divisions and their influence on food. It’s not all gefilte fish, blintzes and hamentaschen, though the Ashkenazi Jews of central and eastern Europe have been the biggest influencers of American Jewish culture. They are the ones to thank for bagels, brisket and schmaltz. There are also the Sephardi Jews of Spain and Portugal, whose foods are influenced by the fresh produce, olive oil and spices of that region. And then there are the Mizrahi Jews of the Middle East bringing food influences from that corner of the world. Every one of them is reflected in this book, which gives it a diversity that seems to reflect the way people eat these days, Jewish or just confused German. There’s history woven into the pages and recipes, along with the Jewish experience related to food and its production. I’m confident that, thanks to Koenig’s detailed steps, my hamentaschen technique could one day rival my latke skills. She also makes gefilte fish sound like something I want to eat right at this very moment. This isn’t her first effort documenting Jewish culinary traditions and it shows. Her familiarity makes for approachable recipes with updated flourishes that are signs she’s cognizant of how most people cook. It’s OK to use store-bought bouillon instead of sweating over homemade vegetable broth for creamy sorrel soup with harissa. I’m grateful for the slack since I’m barely inspired to venture into the kitchen when I get home from work right now. The biggest criticism I’ve seen of this book is its organization, but I didn't notice because I typically look for ingredient-specific recipes in the index rather than meals based on a theme.

In fact, my index perusing is how I found Page 208, remedy to a garden and crisper overrun with greens and even garlic scapes, which became the aromatic of choice for my version of greens shakshuka. Thank you Page 208 for saving dinner and my sanity, if not my kidneys.

This recipe is a modified version of Leah Koenig’s Spinach Shakshuka, which appears in Modern Jewish Cooking, page 208. Published by Chronicle Books, 2015.

Heat oil in a 10-inch skillet over medium heat. Add the scapes and cook, stirring occasionally about 5-7 minutes, until softened.

Add the chilli pepper, coriander, cinnamon and salt, cooking until fragrant, about one minute.

Add greens and lemon juice, turning greens until wilted about 5 to 7 minutes, depending on how hefty your greens are (I find kale takes longer than chard to wilt, for example).

Add more greens as they wilt, particularly if they don’t all fit in the pan at once.

Spread wilted mixture evenly in pan and the create four shallow indentations in the greens mixture to hold eggs while they cook.

Cover the pan and cook until eggs are set and yolks are only slightly runny.

Remove from heat, sprinkle with feta and drizzle with olive oil. Serve hot from the pan.