Rhubarb for the lazy

Posted May 23rd, 2015 in Recipes, Spring Recipes, Summer Recipes, In The Kitchen 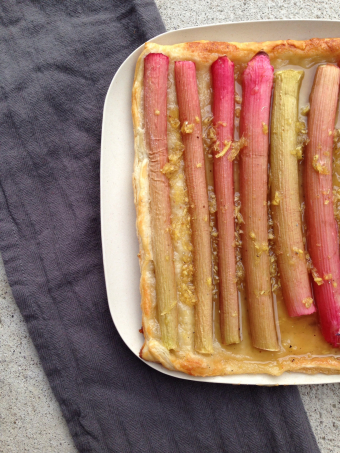 I got an email this week that will likely wind up in the best emails ever file. It was from a local chef asking if I was doing another purslane giveaway. He was worried he may have missed it. Only one other person has ever written asking for purslane rather than await my offer on Twitter, where, when I replied enthusiastically with unlimited offerings and regular deliveries to potential takers, I was stonewalled. My reply to the chef, though, was more tempered; one of good news and bad. He needn’t worry about missing purslane season. It was still far too early for there to be much of the succulent weed. Unfortunately, I’m no longer yardsharing, so I don’t have access to a plot of earth that was the most prolific producer of purslane I’d ever had the pleasure of working. As a consolation, I offered him some red-veined sorrel from my half-a-postage stamp parcel that is my own backyard. Last year, the pointy-leafed perennial with its fuchsia vascular system turned to seed and I thought this was quite fortunate. I let nature run its course and now, I am so overrun with red-veined sorrel that I’m swearing a blue streak. Still, I’m a little bummed I can’t offer the chef purslane. For the two years I worked Grackle Garden, I drove pounds of it to Niagara-on-the-Lake and to just about every corner of St. Catharines, hand delivering the freshly picked weed that makes most serious gardeners sneer. My request of every recipient was always the same: let me know what you do with it and if you want more. I never heard back from anyone, which I figured didn’t bode well — for the purslane, which likely wound up in green bins, or for me, who is likely known in certain parts as the kooky woman who hoodwinked folks into thinking a common garden weed was a delicacy.

But speaking of surprise delicacies (because purslane really does belong in that category), I made a rhubarb tart that offered some unexpected yummy bits, much like Grackle Garden with its edible weed squatters. My rhubarb has been an impressive producer this spring but when I plucked a bunch of hot pink stems to make room for more to grow, I wasn’t motivated to do my usual crisp or syrup. I had just come home with two pounds of asparagus and my attention was on making the most killer, 10-tablespoons-of-butter Hollandaise sauce.

My rhubarb, a few weeks ago

So, I pulled a sheet of store-bought frozen puff pastry from the freezer, trimmed the ends of my sour stalks, and did little else with it. I couldn’t even be bothered to chop my ‘barb and fold the pastry over it to make a galette. I just curled up the edges of the dough and deemed it a tart. I did give the pastry an egg white wash. That must get me a gold star of some sort. And the real effort, which really wasn’t much at all, was put into the syrup I poured over top of the vegetable that often gets mistaken for a fruit. It had fresh ginger for spice, and green cardamom for a warm earthiness, some raw cane sugar to counter my rhubarb’s bracing bite, and water. I was sure, though, that the tart was a complete failure when I pulled it from the oven and saw that some of the syrup, no matter how reserved I was with it, had spilled over the edges of the pastry and pooled on the parchment paper around it and hardened in the heat of the oven. So not blog worthy, no matter what I tried. It didn’t matter that the crust flaked and wasn’t soggy, or that the flavour was brilliantly spring. Then my husband started picking away at those pooled bits.

It was a gradient of brown, starting with the darkest, hardest bits that shattered as he picked at them. The shards had a bitter bite to foil their inherent sweetness. Others bits were a gorgeous amber, tasting of the most perfect, rich caramel. The rest, more golden in shade, peeled off the parchment like sugary taffy kept in check by the hints of ginger and cardamom making themselves known. We delighted in our discovery, an amuse-bouche to the flaky tart slices we’d soon enjoy. And proof once again that sometimes what we think isn’t worthy is truly one of life’s treats. Here’s to a bountiful purslane season.

This is a really pretty dessert that's perfect when you're pressed for time or want a quick rhubarb fix. Serve it with vanilla or strawberry ice cream, if you're in the mood. Also, I need to give credit to Tara O'Brady for the rhubarb layout. While not chopping it came out of necessity for me, it was a thing of beauty that I once saw done by her.

Spread thin layer of honey onto surface of puff pastry.

Trim rhubarb stocks about an inch shorter than the length of the puff pastry sheet. Lay stalks about a finger-width apart on pastry. Fold up edges of pastry but not over the rhubarb (fold to about the same height of the rhubarb or slightly higher).

In a saucepan over medium heat, combine sugar, water, ginger, cardamom and potato starch and bring to a boil, stirring until thickened. Pour evenly over rhubarb on pastry.

Brush pastry with egg white and bake for 35 minutes or until pastry turns golden brown and flakes.

*Note: I buy cardamom pods and grind them myself (a coffee grinder is what I use). I find it best to sift the ground cardamom through a sieve afterward, to keep bits of tough pod skin (is that the technical term?) out of mix.