Bombs away: It's seed bomb season 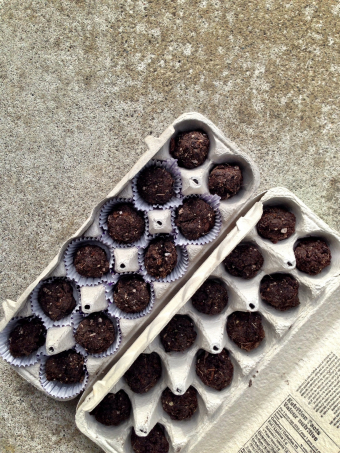 It's around this time of year that I start to miss being a downtown daytime dweller. When the snow gave way to grass and those perpetual grey clouds parted to reveal that the sun did indeed still exist, it was a sure sign that I'd soon be able to forgo lunch al desko for noshing al fresco on the library steps. When I worked downtown, the library courtyard was my favourite spot to take a break from the demands of the office and revel in the sounds of my city: the chatter of the other average bureaucrats enjoying their midday break, the cacophony of traffic, the harmony of singing birds. And then there were the sights, most notably the yellow flowers — lillies, I think, but I'm bad with blooms — that emerged from the bed at the base of the library's water fountain. I often daydreamed of sneaking some rainbow chard into their midst to break up their golden monochrome. I gave thought to planting a tomato or two that would creep up the sides of the dreary grey edifice of the police headquarters across the square from my spot on the steps. Lavender, chives, which are such beauties when they flower, oregano, and basil would add something to those plain municipal gardens, too, I figured. Much as I imagined all the good my guerrilla gardening would do — who wouldn't want to pluck fresh herbs for dinner en route to the parking garage at the end of the day — I gave up early on my career as a clandestine horticulturalist. The one time I tried my green thumb at it, all efforts were cut short by an overzealous summer student with a whipper snipper.

A freshly made seed bomb.

Still, a girl can dream, and I have, including plotting a few seed bombings. Seed bombing is that act of civil disobedience for beautification I've long wanted to do but haven't worked up the nerve. Still, I've often pictured myself driving through town at high speeds (not too high because I'm a mom now and rocking the baby on board), chucking balls of seeds, soil and clay out my window and returning weeks later, after rain showers and sunshine have coaxed the seeds out of dormancy, to find wildflowers breaking through the bleakest landscapes. My first target would be the scrap metal operation on Welland Avenue, near Geneva. Headquartered in an old house with boarded windows and a lean-to laced with graffiti tags, it needs some serious sprucing. And, now I have the arsenal to carry out my aesthetic assault, if I manage to scrounge up the courage. On Sunday, I joined a group of strangers in a Burlington backyard to make seed bombs and strategize our war on ugly urban landscapes. It was one of several scheduled get-togethers of a foraging and wild edibles group I found on Meetup. The session was led by a woman named Jennie, who started the group and has hosted sessions on making lozenges with slippery elm, propagating elderberry cuttings, digging up edible roots and retrieving drinking water from local springs.

The woman is the definition of naturalist and the kind of person you'd want with you if you ever got lost in the woods. And she makes a mean seed bomb. Though they're more often thought of these days as the tool of the guerrilla gardener, seed bombs, or seed balls, are actually an ancient farming practice made popular in the last century by Japanese agriculture scientist Masanobu Fukuoka. Fukuoka, who authored The One-Straw Revolution, was a proponent of farming with as little human intervention as possible. Think no-till, no fertilizer, no pruning of trees. Seed balls, though they take effort to make, really were effortless ways to store and plant seeds for food or re-vegetating desert areas. The guerrilla gardening movement latched onto the concept in 1970s New York City where "seed grenades" were launched onto barren properties to beautify them. Fast forward to Sunday in that Burlington backyard and there I was, rolling up my sleeves to finally join a movement that had captured my imagination on those lunch breaks at the library. The usual method of making seed bombs is to mix one part soil, one part seed and one part red clay, and moisten with a bit of water to form the mix into balls. The balls are then air-dried until they harden. The premise is that after they are launched, rains will  soften them, dissolving the clay and urging the seeds to sprout and grow. We didn't have any clay, so improvised with the next best natural binding agent we could: flour. We mixed three parts soil with a half part flour and a generous handful of native wildflower seeds. We mixed the dry ingredients before adding water to dampen them just enough that everything held together when formed into balls.

Small seed balls are great for planting in a garden. Large seed bombs are best for those areas begging to be beautified. Food or flower seeds make for good "shrapnel" in a seed bomb, if you will. Once they're formed, the balls can be left on a sunny windowsill indoors, near a heating vent or put in a dehydrator to dry out and harden. You can store them in an egg carton until they're ready to use. My first attempt at making seed bombs gave me something that looks like miniature moose turds or giant rabbit poops. Take your pick. Whatever the case, they are balls of fertility and beauty in waiting. The best time to launch this aesthetic arsenal is April, in time for those showers to bring us proverbial May flowers, or again in the fall, so seeds can overwinter and be ready to bloom at the first sign of spring. Oh, and make sure wherever you bomb, it's nowhere near one of those whipper snipper-bearing summer students or anywhere else that gets mowed, otherwise all bombing will be for naught. Now to warm up my pitching arm and do a recon mission to the scrap metal joint. I've got 36 seed bombs needing a place to land. Stay tuned...