Posted Mar 10th, 2015 in Recipes, Winter Recipes, In The Kitchen 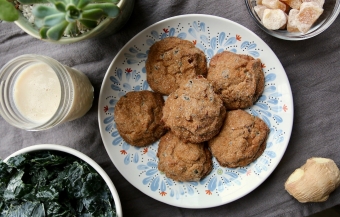 Ginger molasses kale cookies are a perfect wintertime snack with lots of sweetness and spice and a health kick from additional kale you won't know is there.

This recipe for ginger molasses kale cookies is a healthful twist on a classic wintertime treat.

If I was to eat something indicative of my mood these days, it would be the colour blue. But I learned in university, living one block from a Mac's Milk with its tireless slurpee machine, infinitely spinning flavours in electric shades like a sugar-infused kaleidoscope, that blue foods do crazy things to a person. Scary things. Things that demand writing yourself reminders of "I ate beets last night" proportions to avoid eye-popping, heart-racing worry 12 to 24 hours later.

So why so blah that blue foods would be like some sort of comestible pathetic fallacy? I returned to work two weeks ago; my maternity leave officially over. It was painful for so many reasons, not the least of which was going from spending most of my waking hours with my daughter to only seeing her for a couple each day.

My emotions percolated close to the surface on Day 1. Sadness. Resentment. Denial of my return to corporate life by wearing purple Pumas to the office instead of practical black flats. I had been given pep talks galore and told that it gets better with each day. That eventually it would feel like I had never had that year off.

I seem to be proving the opposite true, however. Day 7 may have been the worst of them all when I stuck my head into my boss's office under the guise of asking a serious work-related question. I found myself sitting across from him, my eyes welling, in a mini therapy session instead. I was desperately seeking reassurance that everything would be OK.

"Don't do it this week because we're really busy, but if you call in sick one day to hang out with your kid, that's OK," he said. I have the best boss ever and bouyed by that fact, I headed back to my desk, calmer and with drier eyes. There, I rewarded myself for making it through another quarter of a day by eating a cookie. Not a blue cookie but a green one.

I revealed on Twitter a few weeks back that donuts and pie were my true loves. Kale was a close third. This will probably shock a few who have heard me profess my undying devotion to that most mighty leafy green. Still, I'll take a Dutchie over dino kale or a slice of cherry over curly kale, if truth be told.

Someone suggested I marry my loves. Kale donuts, perhaps? And really, why not? If we're going give bacon a baked good outlet, we might as well for kale. Then came the tweet that really got me thinking. It was from a woman named Chris Alic (@calic68), who, like me, is an urban gleaner. She rescues unwanted fruit and then tweets pictures of the pie she makes with it. She also knows her crustaceans, just in case you're ever on a beach and find an unusual critter in a shell, then tweet a photo and request help to identify the sucker. Thanks to her, I now know what a pen shell is.

So when she said that she puts kale in her cookies, I listened. I am not much in the way of a baker so I asked for more details. "Just add some to your favourite cookie recipe," she urged. I made a mental note, then went into research mode. The Internet pretty much has a lock on chocolate chip kale cookies. To me, that sounded as appealing as one of those bacon-laced baked goods. What has always appealed to me, though, is kale with ginger — usually in a stir-fry with a bit of tamari for good measure. But if a cookie was to be the sweet vessel to carry my kale to my mouth, perhaps it could be a ginger molasses cookie, whose chewy crumb has a way of breaking down whatever resolve I may have to say no to more sugar.

So that would be it. I would make ginger molasses kale cookies. With lots of butter to give them a dense bite in the middle and lacy, slightly crisp edges to juxtapose their inner softness.

These cookies would be snappy, too, with the addition of crystallized ginger, and the richness of the molasses combined with the caramel notes of coconut sugar would round them out. Oh, and an egg for a bit of rise. That in itself would put a person in a good mood but the addition of kale, with its reputation of being a mood-boosting food, thanks to all that folate and those antioxidants, is just the extra push I need through this adjustment period of mine.

No sense fooling myself that kale makes these decadent beasts healthy by any stretch,  but I'm sure its presence counts as at least one dietary Hail Mary.

Best of all, they're not blue so there's no "Oh lordy" later on.

I also call these Calic '68s, in honour of the woman who inspired them, Chris Alic. The spices make them a wintertime go-to, which is when kale is at its peak, in my opinion. Cool-weather kale is sweeter and doesn't have that bracing pungency of the leaves grown in the high heat of summer.

Pulse kale in a food processor until finely chopped and set aside.

Cream butter, sugar and egg in a bowl until blended. Add the molasses and continue mixing until blended. (I have used a hand mixer for this when I’ve been pressed for time. Just don’t overdo it)

Combine the dry ingredients, except for the raw sugar, then fold into the butter, sugar, egg and molasses mixture. Add the kale, folding in until well-mixed. (Most Niagara farmers have taken their kale out of their hoop-houses to make room for their vegetable transplants that will populate this year's gardens. But you may still find the odd Ontario-grown leaf at Bamboo, where they often have bags of lacinato kale from nearby Norfolk County.)

Scoop out tablespoons of dough and roll into balls the size of Timbits (donut holes, if you're not Canadian), then roll in raw sugar to coat.

Place on cookie sheets about a good inch and half away from the edges of the tray and each other because these suckers will spread during baking.

No more than 9 per tray, which means you'll likely have to do two shifts cookies.

Place trays on the centre rack of the oven and bake for 18 to 22 minutes, until edges darken slightly.

If you don't want to use butter, solid coconut oil works beautifully, too. And if you don't have raw sugar, regular sugar works well in a pinch. It just lacks the crunch of the raw stuff.