Jawohl! Sauerkraut steps up its game in New German Cooking

Posted Feb 23rd, 2015 in Recipes, Winter Recipes, In The Kitchen 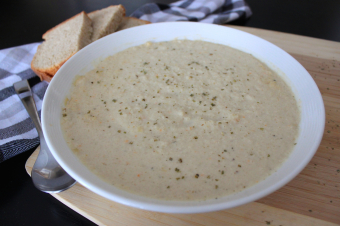 Beer, potatoes and fermented cabbage work some serious magic in this creamy sauerkraut soup from New German Cooking by Jeremy and Jessica Nolen.

They are some of the most hurtful words you can say to a German, or someone of such stock.

And while they weren't said directly to me, the hushed tones in which a fellow guest at a dinner party whispered to her date "I don't like German food," revealed that she knew their impact and she was trying to shield me from their harm.

I stared in disbelief that someone could actually feel that way about the food I grew up with; the food that brings me such joy, even if now I eschew much of it as a vegetarian. Whenever I travel to Germany, I boast with pride when I'm with my husband at a restaurant and read him the menu, suggesting the best morsels to get a taste for my ancestral land.

The dinner guest justified her decision about an entire nation's cuisine by recalling a meal she had during a business trip to Frankfurt. It was a pork knuckle the size of her head on a plate garnished with a few pan-fried potatoes. To her, that heavy, fatty beast of a dinner was German food. To many, that is German food -- the stereotypical sustenance of a country known for its other sweeping generalizations of being populated by an efficient, punctual, beer and Riesling-loving people with a knack for building great cars.

How could she not see that German cuisine was more nuanced and diverse than that? That yes, they can do pork and potatoes like it's nobody's business and give you enough to last a week, but they can also do morels and white asparagus in delicate cream sauce to make a person swoon? Or do up a salad plate that puts to shame our simple Caesars or iceberg wedges, even those gussied up with cheese and bacon. And don't get between a German and his trout — oh the magic they work with their beloved Forelle.

That's why I hugged (clung to!) and maybe got a little bit emotional when I cracked the spine of New German Cooking: Recipes for Classics Revisited (Chronicle Books, $52) by Jeremy and Jessica Nolen, who, I must note, aren't German.

They get it. They get how beautiful German food can be; that it can be simple or sophisticated. They accept that when people think of the revered cuisines of the world — the French, the Asian, the Italian — German is not likely among them. And yet they know its underrated status is unfair.

Hence a book to catapult German food into the leagues in which it so rightly belongs. The husband and wife team work the kitchen at Philidelphia's Brauhaus Schmitz, a beer hall that celebrates the standards (think sauerbraten and bratwurst) and puts a modern twist on staples like Westphalian ham and vegetarianizes Maultaschen, a German version of ravioli whose literal translation is mouth pockets.

But it's also a love letter to German food that Jeremy Nolen started penning while growing up near Reading, the capital of Pennsylvania Dutch country. He got immersed in German cooking when his chef father took a consulting job at one of the local German clubs and he rolled up his sleeves to help in the kitchen.

Eventually, Jeremy moved on to helm the kitchen at another local German hall, further honing his mad spaetzle skills while adding his own spin. He went on to other non-German kitchens but always managed to get something Deutschland-inspired on the menu, even at a French bistro where he served as head chef.

From its simple cover in the colours of the German flag, to its glossy photos of breads, soups, salads, meats and desserts, I saw so much of the food I loved growing up but with enough embellishments to make it different, intriguing and in some cases new to me. I saw in the book's pages so much of my Oma Mayer's kitchen that I knew the toughest food critic I ever met would approve of this recipe collection and maybe even ask to thumb through it, were she still around.

That's why I love this book so much.

Some of the recipes are simple, quick and hearty fixes, while others are more involved. The Nolens take you through stepping up sauerkraut's game (it's so much more than fermented cabbage, though they'll show you how to do that, too) and making your own sausage and pretzels. Of course there's recipe for Hasenpfeffer and spaetzle, but it's those German noodles with asparagus, gouda and ramp-hazelnut pesto that lend a surprising freshness to them.

And those salads — that stunning roasted parsnip salad with hazelnuts, blue cheese and wheat beer vinaigrette or the more traditional dandelion greens with warm bacon and mustard dressing — they are meals unto themselves, rather than wimpy appetizers or sides.

As for that naysaying dinner party guest, I wish I had her number so I could loan her this book. I think it would change her mind.

But back to sauerkraut. It's in my blood to love the stuff so I was drawn to this recipe that paired it with a yeasty Hefeweizen and some potatoes, and called it soup. It's such a simple concoction but one where these three most German staples combine to create complex flavours in a creamy sauerkraut soup.

The sauerkraut and wheat beer give the soup substance in its flavour; the potatoes just pure substance. During this cold spell of ours, ladling up a bowl of this creamy sauerkraut soup was like slipping on a favourite, worked-in wool sweater, made soft with time and wear. I was enveloped in coziness from the first spoonful.

It's a soup of the season for sure, and can easily be made with local ingredients. My garage is home to plenty of potatoes and garlic from my winter CSA, Silversmith Brewing in Niagara-on-the-Lake can hook you up with a beautiful Bavarian breakfast wheat beer to serve as the broth, and the Ontario Natural Food Co-op does up a stellar fermented kraut, available at local health food stores, if you didn't make your own this year.

a medium saucepan, melt the butter over medium-high heat.

Add the onion and garlic and cook, stirring occasionally, until translucent, about 4 minutes.

Add the sauerkraut and marjoram and stir to combine. Pour in the cream and beer, stir to combine, and bring to a boil. Turn the heat to medium, cover and simmer for 20 minutes.

Add the potatoes, re-cover and cook until the potatoes are tender, about 25 minutes longer.

Remove the pan from the heat and let cool slightly. Working in batches if necessary, transfer the mixture to a blender and process on low speed until smooth and creamy, about 3 minutes. Return the soup to the saucepan and reheat gently until hot.

If you want to make your own sauerkraut, there is a recipe in this book, or visit a local health food store for an organic fermented version, which is so much healthier and flavourful than those vinegar-laden versions at the grocery store.

As for the heavy cream, I can't eat dairy other than butter so I substituted Belsoy cream instead and added it at the end before the pureeing process. If you can't find a local craft Hefeweizen, get your hands on a bottle of Erdinger or Paulaner, two great German specimens.

Best enjoyed with a few slices of homemade rye bread on the side.