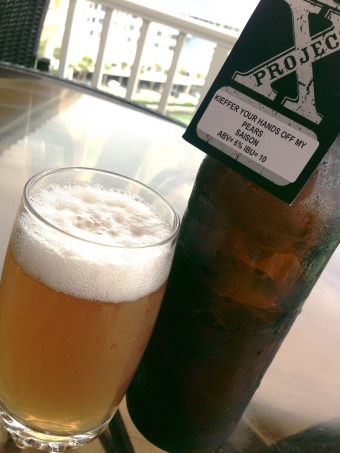 There's something about persistence. It pays off, apparently.

Although, one late November Saturday, as I hurtled down the QEW in my husband's Corolla, bound for Toronto, it felt more like payback. It was 8:30 a.m. and for two sleep-deprived parents, it was painfully early to be up and vaguely resembling functioning people. But I had an invitation to brew beer at Great Lakes Brewery and precious cargo in tow — my wide-eyed daughter, Olivia, and 15 pounds of Kieffer and Bartlett pears — for the occasion. Rewind a week and I was scouring parks and boulevards in north St. Catharines for the last of the year's Kieffer pears. A relic from the canning industry once omnipresent on the peninsula, the Kieffer is now an annoyance every fall when loaded branches drop bushels of fruit to rot on lawns. It's not like the Kieffer had many fans when it was a canning industry staple. It was easy to grow and held fast against disease that could raze other stone fruit orchards. But they were chip-your-tooth hard and gritty if eaten too early; the flesh taking at least a month after harvest to turn buttery and develop muted pear and lemon flavours. The minutes from a local farmers' meeting in 1899 noted the Kieffer was a prolific producer that stored well. No other kind words were offered, however: "Now who is going to stand up and brag about the Kieffer pear for quality or flavor or flesh?" they chided.

Kieffer orchards disappeared with our canneries and, according to some old farmers, those contracts with prisons or communist countries that realized they could do better than a canned Kieffer. Still, I have a soft spot for this rock hard fruit. I try to win it fans whenever I can. The Garden of Eating rescues hundreds of pounds of Kieffers, canning them for local food banks every year. But rewind again, this time to Fall 2013, and I could be found cursing the Kieffer. I desperately sought refuge from the barrage of homeowners' calls to come get their pears (and please hurry!). My escape was Twitter where I stumbled upon a potential solution to my Kieffer woes. "What would you do if you were brewmaster for a day?"  Great Lakes Brewery asked. "I would turn all those unwanted pears, falling to rot on my city's boulevards, into beer," I replied hopefully. Great Lakes loved the idea. A year and several scheduling snafus later (pregnancy for me, beer festivals and brewery renovations for them), I found myself brewing a pear saison. It was the Kieffer's overdue second chance to show it was worthy of more than compost and derision in meeting minutes. We arrived late to Great Lakes' Etobicoke headquarters, a yellow brick building more a nod to Soviet-era architecture than a suds shrine home to the Canadian brewery of the year. It was drafty and cavernous but the smell of fermenting grains was energizing aromatherapy. A cherubic brewmaster-in-training named Blake, donning knee-high wellies and Buddy Holly specs, had already been working for half an hour, boiling the sauermalz and pilsner grains to complement the mighty Kieffer during fermentation. Troy Burtch, the brewery's social media manager, dug out a chef's knife and I began chopping pears to freeze and add to our brew later. He and Blake sampled the goods. I held my breath. It would make great beer, they decided. I smiled, relieved.

Me, hard at work, doing something called sparging, which is adding hot water to extract the wort from the grain.

After he'd done most of the work, Blake passed me a metal paddle to stir the steaming cauldron of grains. Olivia and my husband Steve watched from the sidelines. "The one who pitches the yeast brews the beer," Blake said as he handed me the ingredient that would turn our concoction into more than grain-infused water. I felt mildly guilty taking the credit as I emptied a bucket of yeast into a metal canister where the magic would happen. But who was I to argue? Call me the brewmaster. All that was left to do was wait, and cross my fingers the Kieffer would shine as I knew it could. We batted around potential names for our brew, settling on Kieffer Your Hands of My Pears Saison. I emailed Troy a few weeks later to inquire about its progress. It would be another month before word came. The beer was ready and it tasted good. The 70 litres we brewed sold within a day when released Jan. 14.

I marvel at the interest in the Kieffer's latest incarnation — its fruity nose and balanced bitter-sweet flavours that make it the ideal homage to a former canning industry stalwart-turned-neglected stepchild of Niagara fruit farming. I beam at its four-star ratings on Untappd. So yeah, persistence? For the Kieffer pear, it paid off.