Posted Jan 4th, 2015 in Recipes, Winter Recipes, In The Kitchen 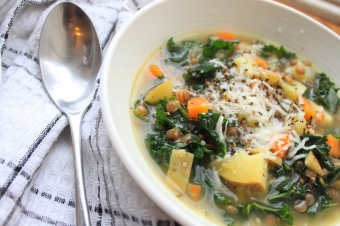 This smoky lentil soup with kale and potatoes will leave you craving soup all year round. It's made earthy with a hit of smoke and bright with lemon juice.

I'm not superstitious but I wish I could have a do-over of New Year's Day just so I could eat some beans.

Legumes are believed to bring good fortune when eaten during the changing of the calendar and after 2014, which was a banner year for me, I want to do as much as possible to help 2015 continue on such a positive path.

I gave birth — twice — first to my daughter and then to my book, both of which are events I had only dreamed of previously. To have both happen within months of each other often makes me marvel. I'm really not sure how I accomplished either, in hindsight. I don't say that in a "Whoa, look at me," kind of way, but more of a "Wow, how did I pull that off?" loaded-with-self-doubt statement.

Giving birth always petrified me, which could be why I waited until I was 37 to do it. And writing a book, well, as much as I had imagined doing it since I was a child, grown-up me figured it would remain an elusive achievement because I wasn't sure I had the discipline to do it.

And so those beans in my bowl on Jan. 1, symbolic of prosperity, would have made me feel that much better about what's ahead. That I can do it — whatever it may be — in 2015. Still, as a vegetarian (yes, I call myself that despite my recent serial monogamy with smoked trout), I have eaten plenty of beans in the past year, so I can't help but think I've accrued some serious legume credit to hold me in good stead for the 12 months to come.

Maybe next year, then, for that pulse-filled New Year's Day feast. I'll aim to make it a tradition because something about that word makes it seem infinitely more attainable to me than if I call it a resolution to eat beans every new year. I tend to fail miserably at those and no one needs a reason to feel badly about themselves.

Because of my history with resolutions, I keep the same goals in mind for the year that's about to unfold before me. Stay positive; be kind and patient; be my authentic self, all done with the understanding that I am human and I will have days where I have to do battle with negativity, breathe deeply to keep focused or, when all else fails, find refuge in what will ground me so I can reboot and try again.

I also have other ambitions. Many are usual suspects, but this year, with my maternity leave ending and wanting to give as much of myself to my daughter as I can, I'm more curious than ever to see if I can make them happen. They're noble intentions, and if you plan to adopt similar ones, I'm happy to be your goal mate so we can cheer each other on all the while.

Some of them will seem like throwaways to those who know me, I'm sure, but I know how life can trip one up with little things that make us say 'Maybe tomorrow. Before you know it, another Jan. 4 rolls around and I'm sitting before my computer telling you again that I wish I had eaten beans on New Year's Day. So, wish me luck.

Try something I've never done before: For me, that's making sourdough bread. Jan at de la terre bakery in Vineland shared some of his starter with me. I've been trying to keep it alive and don't think I've killed it yet. So once I feel I've really gotten to know my glob of fermented flour, which my husband mistook for cream soup when it first arrived in our house, I will bake with it. Sourdough has always seemed daunting, like a high-maintenance significant other, but I'm determined that 2015 will be the year of homemade tangy, bubbly bread, if only because the last four cookbooks I've read all have recipes for it. It's a sign, I say...

Plant a garden: After giving up Grackle Garden, the backyard I borrowed with my friend Rowan, I had to settle for getting my finger nails dirty in my postage stamp plot and a few containers in my backyard last year.

The more I try to grow in the earth my yard provides me, the more I realize I need to find some hardy perennials and let nature take its course. No matter how much soil remediation I do, it's hard to grow much more than a few edible leafy greens. Fine by me, given my love for them, but I am now envisioning a low-maintenance herb garden where my chard once grew.

To get my vegetable husbandry fix, I'm going to rent a community garden plot so I can not only grow some food and play in the dirt, but feel a connection with a neighbourhood and those living or, at least, playing in it. Community gardens restore pride in a place, provide a sense of belonging and make a contribution that goes beyond ourselves. Why wouldn't I want to be part of that?

Greening Niagara has 20 community gardens throughout the region so I know there's a patch of dirt with my name on it somewhere.

Write more: This isn't just to earn more income, though that's always a bonus. I feel out of sorts when I don't write, be it on this blog or elsewhere, so for my own well-being, I need to take more time to do it rather than frittering away my few spare moments on Instagram or Facebook. I deleted the Facebook app on my phone and haven't looked back.

Writing is true catharsis. I had so many ideas last year and so little time. Perhaps I can catch up in 2015.

Pitch another book: Yes, once you write one, you want to write another. It's addictive, I tell you. I have two books floating around in Idea Land right now, becoming clearer every day. This is the year I put in motion the ways to make them happen.

Make more lentil soup: In the meantime, those beans beckon. It's not New Year's Day but Jan. 4 is close enough, I hope.

So I leave you with my recipe for smoky lentil soup. It's the kind of soup that fills me up on days the fridge looks empty and my options seem limited. Most of the ingredients are staples I always have on hand. The carrots and potatoes are from my CSA. And fresh local greens are available from Chez Nous Farms at the St. Catharines Farmers Market every Saturday, or from Tree and Twig at Bamboo Natural Food Market every day.

All I have to do is open my pantry and see my jar of lentils to know this soup is exactly what's in order; that I have plenty, which proves beans are the auspicious edibles they're touted to be. Happy New Year all.

This smoky lentil soup is a fan favourite in our house. The smoked paprika adds richness while fresh lemon juice cuts any murkiness that sometimes happens with lentil soup. Kale and potatoes add a healthy, hefty kick and the cheese sprinkled on top adds a salty complexity. I hope this doesn't make it sound too dear. This soup is really simple and satisfying at any time of the year.

Rinse lentils. Put in a heavy-bottomed pot and cover with an inch of water. Bring to a boil, then reduce heat to simmer, cooking until tender, about 20 minutes. Drain and set aside.

In the meantime, de-stem and chop the kale. Set aside.

Add onions, garlic and carrots and sauté until softened, about 5 minutes.

Add broth, cooked lentils, potatoes and paprika. Bring to a boil and then reduce heat to simmer until potatoes are tender.

Add the kale, cooking until wilted, about 2 to 3 minutes.

Add the lemon juice and give a good stir. Add salt and pepper to taste.

Ladle into warm bowls and top with shredded cheese, if you like.

If you don't have smoked paprika, 12 to 15 drops of liquid smoke will work, too. Another option is adding half a cup of diced, smoked tofu when cooking the onions, garlic and carrot.