Soup and self-loathing in Niagara 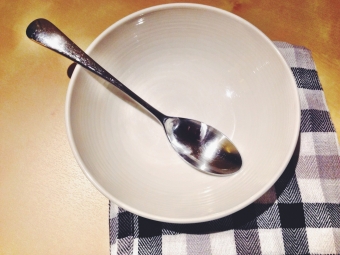 You know those days when you just need a hug? Well, that day has lasted all week for me.

You know those days when you just need a hug?

Well, that day has lasted all week for me. You see, I have two other posts, in different states of completion, that so desperately needed to go online before this one. But every time I look at them, I hit this wall of cinder block-like proportions (aka writer's block). The problem is simple. While the words flow freely in my head when I think about them while doing other mundane stuff — I feel like I could write Hemingway under the table while I'm brushing my teeth — when I sit in front of this computer screen the words flow slower than sludge through a sewer pipe. I am sleep deprived. Eight months into this parenthood thing and I can tell you my daughter is perfect at everything except mastering the art of sleeping for extended periods of time. We were on track — so on track because she's perfect, of course — to nail this mythical feat called sleeping through the night when she just changed her mind. There was no consultation with the rest of us. She just up and did it, going from waking once or twice a night to five or six times. It's like having a newborn again but instead of running on adrenaline, which happens as a new parent, I am running on fumes. I've had mornings when I woke up feeling fine but an hour into my day, my eyelids would feel like lead and my head like it's packed with mashed potatoes. Then I'd reach that point where the slightest whimper from O would make me collapse into uncontrollable sobs. Oh, the mother guilt that ensued. I'd feel like I'm failing my daughter because I'm not sure what she wants or needs in those moments and all I want is for her to be happy (and to sleep); like I'm failing at life because of the long to-do list waiting for me, filled with writing that needs doing, story pitches that need fine-tuning, and freelance assignments with deadlines hovering like a helicopter parent. Sleep deprivation is the ultimate mind fuck. Pardon my language but it's true. And today came the disappointing news that an upcoming speaking engagement for my book is likely not going to happen because registration has been dismal. In fact, I think the person organizing it said something along the lines of how I might feel a bit awkward should I actually go through with it. That would be the moment in my previous life, pre-O, that would have left me sobbing uncontrollably. The soul-bearing work that writing is, it's soul-crushing when you're left with the impression that no one cares. And yet, them's the breaks. No one owes me anything because I gave up evenings and weekends with my husband when I was pregnant to drive to every corner of the region to do interviews; sacrificed two months of childcare by taking maternity leave early to finish writing what is essentially a tome of a love letter to Niagara; gave birth in the middle of it all; then, for weeks, stayed up at night until the birds started singing in the morning to get 'er done. I chose to do that, so come what may. As I read the email from the event organizer this morning after parking my car in front of my favourite breakfast joint, I looked at O, who was starting to get a bit restless in her car seat. She was waiting for me to unshackle her so we could go duck into the diner where I would share my home fries with her while she would squawk and squeal to another baby across the clatter and chatter-filled room. Nothing else mattered. Even in a sleepy stupor that leaves me feeling hungover and more muddled than a mojito, that kid is my rock. Still, I needed that hug tonight; something comforting to make a dreadful week seem like nothing more than a blip rather than never-ending blah.  So I gave it to myself in the form of a big pot of soup. Your friendly neighbourhood therapist would call it self-care. I called it dinner. It was my smoked trout chowder; my I'm-as-bad-at-being-a-vegetarian-as-I-am-at-being-a-mom/writer/wife/whatever right now. And so I've compiled a list of some of my favourite soup-shaped hugs that I've posted over the years just in case you need some comfort right now and someone else's arms aren't handy to provide it. Because when life gives you the most nose-wrinkling, cheek-clenching, wince-inducing sourest of lemons, you can always make soup. Smoked Trout Chowder: because even good vegetarians can fall of the wagon. Spargelcremesuppe: because cream of white asparagus soup sounds more fun in German (though by all means, wait until spring to indulge when these are in season locally). White Borscht: because sometimes we can all be klutzes but at least we won't be seeing red if we dribble some supper on our shirt. Thai Pumpkin Soup: It's like a workout and a getaway in one pot. Mustard Greens with Chick Peas and Curry: because a stew is like a bear hug and sometimes we need one of those, too. Spaghetti Squash Ramen: because sometimes gluten isn't comforting. Spicy Tomatillo Soup: just because. Butternut Squash Soup: because sometimes cider makes it better.