Pledging allegiance to the United States of Bread 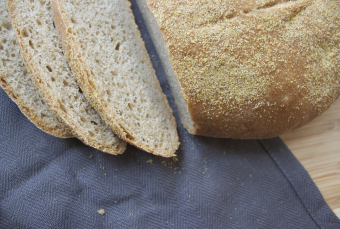 I'm going to let you in on a little secret. Jan at de la terre bakery in Vineland will spare you some of his sourdough starter, if you ask nicely.

I'm going to let you in on a little secret.

Jan at de la terre bakery in Vineland will spare you some of his sourdough starter, if you ask nicely. Wheat, white or spelt, he'll happily oblige your request for the magical stuff that gives a jump-start to his sublime loaves with their porous innards and tang throughout. The only catch is that you have to share the results with him. As someone who has never baked bread — well, until recently — I find that more than a little intimidating. It's the culinary equivalent of spastic me asking to kick around a soccer ball with the German national team. I fear I could easily make a fool of myself, even though Jan has offered me the goods to play with rather than wait for me to ask. A few weeks ago, though, someone came into my life, promising to help me along when I do pay a visit to de la terre for my hunk of fermenting flour. Her name is Adrienne Kane and her assistance comes by way of her new book, United States of Bread: Our Nation's Homebaking Heritage: from Sandwich Loaves to Sourdough (Running Press, $23). It's 75 recipes starring clear, concise instructions to make just about any kind of loaf with a cultural and historical connection to that land south of the 49th parallel. Kane, a food writer and recipe developer who also penned United States of Pie, dusts off and updates some prize versions of the staff of life from near forgotten recipe repertoires, including soft brown bread with grits (a modern take on a recipe from 1894); whole grain nods to the 1960s and 70s called hippie loaves; Vermont Graham bread, born out of tee-totaling hotelier Sylvester Graham's penchant for healthy living; and Parker House rolls from the storied Boston hotel that also gave us that city's namesake cream pie.

Kane's book gives the back story on each recipe, from sandwich loaves to quick breads and sweet rolls, closing with easy fixes for stale slices (I'm thinking of you Apple Brown Betty) that ensure not a crumb is wasted. It's those thoughtful, context-filled introductions to each recipe that make this book more than just a set of step-by-step instructions that are drier than day-old white. It compelled me to set aside any yeast-induced fears and bake bread. This cookbook was nothing short of a page-turner for me as I read through it and tried to choose my first loaf. And though I'm new to bread-baking, it's the depth and breadth of what Kane serves up in the United States of Bread that would make an experienced baker want to pick up a copy. Better still, Kane schools bakers on essential tools for the task, how to get around investing in a stand mixer by mastering the art of kneading, making rounds and scoring them, and the importance of much-maligned gluten in the bread-baking process. She also offers a glimpse into her own pantry, which helps with shopping for the right ingredients. Growing up, wars could be fought in our house over bread. My German father would eat nothing but his Schwarzbrot, that dense, dark rye bread with its molasses-hued, acrid crust. My sister and I begged our mom to buy us Wonder bread. The most she'd yield to that request was store brand 60 per cent whole wheat.

It wasn't until my taste buds matured and I got tired of gummy globs of soft slices getting stuck to the roof of my mouth that I learned to appreciate — even crave — that heavy, dark, slightly sour loaf that was a staple of my dad's diet. That's what compelled me to first test Kane's recipe for Jewish-style rye bread — a pleasant middle ground between leaden German loaves and the fluffier versions I still tend toward today. Her instructions were flawless and so was the bread. It was gone in less than a day. Now it's on to the next loaf. So bring on the sourdough. With this book in my hands, I know I'll do Jan proud.

Reprinted with permission from United States of Bread © 2014 by Adrienne Kane, Running Press, a member of the Perseus Books Group.

In the bowl of a stand mixer, mix the water, yeast and sugar together. Allow the mixture to bloom. It should become bubbly and smell yeasty, about 10 minutes. Mix in the rye flour, and allow the mixture to stand for 20 minutes. This step allows the rye flour to fully hydrate. Add the oil, salt and 1 cup (5 ounces) of all-purpose flour, and using the paddle attachment on low speed, mix briefly until combined. Remove the paddle and attach the dough hook. With the mixer on low speed, begin kneading with the dough hook and adding the additional flour a few tablespoons at a time. The dough will become a more cohesive mass, more elastic, and start to pull away from the sides of the bowl. It is important to watch the dough during this process. All of the flour should be incorporated at each step, but you don’t want the dough to become too dry or heavy. Rye flour is a sticky flour to work with. The dough will still remain quite sticky, but the kneading process will become easier and the dough smoother. This kneading process will take 5 to 8 minutes. Empty the dough onto a well-floured surface, scrape the bowl with a pastry scraper, adding any bits of dough from the bowl to the mound, and gently knead it into a ball. Put it back into the bowl, and place a piece of plastic wrap on the surface of the dough. Place it in a warm spot, and let it rise 1 to 1 1/2 hours, or until doubled in bulk. Pull back the plastic wrap, and empty the dough out onto a well-floured surface. Fold the dough over, once in each direction, to release the gases. Fold the dough into a round and place it on a baking pan. Cover the pan gently with a tea towel or light kitchen cloth, and let the round rise for 45 minutes to 1 hour, or until doubled in bulk. Arrange the oven rack in the middle of the oven, and 15 minutes prior to baking, preheat to 350°F. Before baking, remove the tea towel, mist with water, sprinkle with cornmeal, and slash the loaves. Place the pan in the centre of the oven and bake for approximately 40 to 45 minutes, rotating the pan once at the halfway point. Remove the bread from the oven, and set it on a cooling rack for approximately 5 minutes. Take the loaf off the pan, return it to the rack and allow it to cool to room temperature before enjoying.