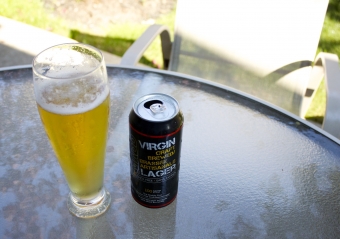 A radler is a briliant way to drown out the summer's heat. Radler slushies, made with an alcohol-free beer by Niagara College, are even better.

Disclosure: Niagara College gifted me the alcohol-free beer used to make this recipe for Radler slushies. The college was not involved in the writing or editing of this post.

No, I didn't raid my parents' liquor cabinet and go crazy with the Sambuca, nor did I sneak a six-pack to the park to drink under the slide with friends.

This intoxicating experience came compliments of my dad. I call it part of the curriculum for Life Lessons with Ludwig. I'm sure there were other teachable moments brought to me by my dad prior to this one, but they would have happened before my folks split and so, those poignant parenting episodes have just blended into one another in the era PD (pre-divorce).

It wasn't until after my parents' marriage breakup, my dad landing back in Germany for a time, that Life Lessons with Ludwig became more defined, each with a beginning, middle and end. Getting drunk is the first one I remember vividly, despite my beer goggle vision at the time.

It was the summer of 1993 and my sister and I were visiting my father in the land of beer and schnitzel. Like all good German burgs, his hometown of Zweibrücken had a summer festival whose central activity was — wait for it — drinking beer. There's a good chance they have similar festivities in spring, fall and winter, too, but this particular celebration was called the Staadtfest, the Town Fest, so all drinking was purposeful, done in honour of Zweibrücken.

Being the good German and Zweibrückener, my dad rounded us up and headed downtown to where a white tent had been pitched as a beacon for the thirsty. Long tables were filled with revelers while buxom Fraus in Durndels wove through the crowd, delivering beer steins with frothy heads and clearing away the empties.

I looked forward to a night of pounding back lemon sprudel, the German equivalent of Sprite, only less American and more German in its austere use of sugar, when a Durndel-wearing Frau grunted something that my dad decoded as our cue to place an order.

He began rhyming off our family's drink wish list but stopped when he got to me, underaged according to Canadian law but entirely legal in the presence of my Deutscher brethren. He didn't want to assume, though I know he really wanted to add a third Pilsner, meant for me, to the order.

"I'll just have a lemon sprudel," I answered.

I could see disappointment flash in eyes. I'm certain he was wondering how the German-ness got so watered down in me.

"How about a Radler?"

He took that as his cue to order one for me and within moments, the Grunting Frau set a glass filled with a mix of beer and my beloved lemon sprudel before me.

It was good. Too good. It went down the gullet quick and easy. The Grunting Frau returned with promises of another round. She called up our previous order from memory, looking to my dad for the OK to proceed with refills. And soon enough, another Radler was in my midst.

She didn't even ask the next time, just looked for the permissive nod from my dad and like magic, I had another one. By the fourth, she seemed like a stealthy beer slinger. I didn't even notice any sort of communication between her and my dad. By the fifth, she was just a mind reader.

It was fair to say I was a fan of this sweet, hoppy concoction but by that point, I was blitzed. Begin the Life Lesson.

My dad hauled me to the bumper cars. Whether he was trying to sober me up by getting me to hurl or teach me the dangers of drinking and driving, I can't be sure. But I know this is where the "Consequences of my actions" segment of the evening was to begin, only my dad's plan went awry. I loved the bumper cars. I rammed everyone I could. It won the heart of a German boy, with whom I had a few head-on collisions, but even drunk, I was shy and declined his number when he offered it.

My dad also yanked me out of there before I could change my mind and his life lesson really went off the rails. Too bad. The bumper car crush probably went on to become the captain of the German soccer team; the kind of guy who looks good in knee socks and grass stains, but I'll never know for sure.

I was put to bed as soon as we got home. Life lesson over. Truth is, it wasn't needed. If he was worried about what I might do with a system full of booze and a car, it was for naught. I don't drink and drive. I do, however, love Radlers.

And now, as a nursing mom I have an even greater appreciation for their low alcohol content, or, in the recipe below, their no-alcohol content.

This summer, staff and students at the Niagara College teaching brewery released a virgin craft lager developed for the MADD Virgin Drinks line. A six-pack landed on my doorstep and as a fan of beer (the German genes kicked in eventually), I looked forward to drinking it.

Unlike the non-alcoholic suds you find at the grocery store, this beer is truly alcohol free. There's zilcho booze, unlike the 0.5 per cent in the other stuff on the market. Serious thought and care went into the MADD Virgin Drinks Craft Brewed Lager's creation, from the recipe development to the use of a sensory panel and consumer studies to see if people would actually drink it.

In July, it won a gold medal at the 2014 U.S. Open Beer Championship in the non-alcoholic category.

To boot, 10 per cent of net sales go to MADD Canada, and the brew is available in major retailers, including Sobeys, Shoppers Drug Mart, Metro, and Walgreens in the U.S. Cracking the can, it smelled promising, like a true lager. It had a light and crisp air. I tasted a lot of rose water when I sipped it but on a hot day, in between gardening and running errands, this 0 per cent beer was a solid thirst quencher.

In a glass at a party, it won't give away that you're the DD. And for a nursing mom, it satisfied a craving for hops and yeast. Mixed with some lemonade, it also got me drunk — on nostalgia for life lessons in beer tents and bumper cars.

This is a refreshing beast of a drink. Of course you can use beer with alcohol instead. I recommend a lager or pilsner, if you do.

Store-bought lemonade is quickest route to this slushy but making your own takes all of 10 minutes, so have at her, if you prefer.

Ingredients for the homemade lemonade

Ingredients for the radler slushy

In a saucepan over medium heat, mix one cup of water and sugar. Stir constantly until dissolved. Do not bring to a boil.

Mix beer and lemonade and pour into a loaf pan.

Put in freezer until liquid is firm but not hard like ice on Lake Erie in a polar vortex (roughly six hours).

Scoop out frozen mix and give a quick whir in a blender to break up any chunks.

Pour in a beer mug and add the reserved beer.